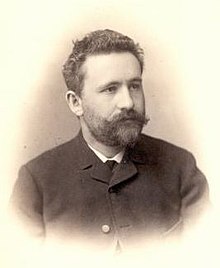 Kraepelin provided the basis for today's system of classifying mental disorders . He introduced experimental psychological methods into psychiatry and is considered the founder of modern, empirically oriented psychopathology , with which psychological thinking became common in psychiatry. The development of modern psychopharmacology can also be traced back to Kraepelin. To call him the founder, however, is neither justified by Kraepelin's research nor his publications. Because this attribution is based primarily on the narrow work On the Influence of Simple Psychological Processes by Some Medicines from 1892.

Emil Kraepelin was born as the youngest of three children of the music teacher and actor Karl Kraepelin . He passed his Abitur in 1874 at the Carolinum grammar school in Neustrelitz. Since 1871 he was engaged to Ina Schwabe, who was seven years older than him, and married her in 1884. With her he had eight children, four of whom died in infancy. In 1885 his first daughter was born. Perhaps he had the closest relationship with his brother Karl, nine years his senior . Inspired by him, after completing his military service in Leipzig, he studied medicine at the University of Leipzig and the University of Würzburg from 1874 .

Here he was able to work with Franz von Rinecker at the psychiatric university clinic in 1875 , who hired him as an assistant at the end of 1877 after another brief stay in Leipzig, where he met Wilhelm Wundt . In 1878 Kraepelin completed his studies with a doctorate, switched for four years to Bernhard von Gudden at the district insane asylum in Munich and went to Paul Flechsig in Leipzig in 1882 , where he aroused Flechsig's displeasure and "to a high degree" his " Dissatisfaction "aroused because Kraepelin did not perform his medical duties in the clinic and was finally terminated (letter of termination:" ... treated ... the service for the clinic actually as a ... minor matter "). With the support of his mentor Wilhelm Wundt, he nevertheless succeeded in obtaining his habilitation with a few just enough publications - without writing his own habilitation thesis .

After he returned to Bernhard von Gudden in Munich in autumn 1883, but was unable to enforce his research methods there, Kraepelin gave up his academic career - also influenced by the planned marriage with Ina Schwabe - and worked from August 1884 to April 1885 as a Senior physician at the Prussian provincial insane asylum in Leubus , which was housed in the former monastery .

On July 1, 1886, he was appointed to his first professorship at the University of Dorpat , but left it with the onset of russification efforts in 1889. In 1890, he began laboratory tests on hygiene at work , as he called it, in Heidelberg , and researched work-psychological relationships with fatigue and practice at work using a work curve . In 1891 he took over the management of the Grand Ducal Badische Universitäts-Irrenklinik in Heidelberg for twelve years , where he introduced decisive innovations. Dissatisfied with the limited possibilities for expanding the clinic, he accepted a call to Munich in 1903 .

On December 21, 1903, Kraepelin and his brother Karl went on a journey from Heidelberg that took him via Genoa to Southeast Asia. Kraepelin carried out studies on the local population in Buitenzorg on Java . This published Kraepelin u. a. under the title Psychiatrisches aus Java , 1904. This in turn made him the founder of comparative or transcultural psychiatry .

Kraepelin expressed his personal attitude to the theory of degeneration z. B. 1908 in the work on the degeneration question or 1918 in the work Sexual aberrations and population increase. The psychiatrist Kurt Kolle described in one of his works ( Große Nervenärzte , 1956/1970) this Kraepelinian attitude as "emphatically völkisch".

Kraepelin was acquainted with the Brazilian psychiatrist Juliano Moreira (1872-1933) and was in correspondence with him.

Emil Kraepelin was buried in the Heidelberg Bergfriedhof . His final resting place is in Department V.

The term and concept of dementia praecox (premature dementia) go back to Kraepelin . He took this name from the French psychiatrist Bénédict Augustin Morel , who used it to describe the illness of a young person who - previously completely inconspicuous - increasingly withdrew and fell into a state of dementia. However, Kraepelin expanded the term to include the diseases hebephrenia and catatonia described by Kahlbaum and Hecker , to which he saw parallels. So the name no longer referred to a single sub-form, but to an entire group of diseases. As a common characteristic of all clinical pictures within this group, Kraepelin observed "a peculiar destruction of the inner connection of the psychic personality with predominant damage to the emotional life and the will".

However, this approach proved too limited and was replaced by the broader term schizophrenia by Eugen Bleuler . What is significant, however, is Kraepelin's approach, which today seems self-evident: instead of classifying mental disorders solely according to externally identifiable symptom similarities, as was customary before, he also took into account changes in symptoms over time and thus the course of a clinical picture in his research . This gave him a further criterion for differentiating, assessing and assessing symptoms and symptom complexes ( syndromes ) in the case of psychological abnormalities, which was also able to narrow down not only temporal but also causal relationships.

In the 5th edition of his psychiatric textbook from 1896, he dealt extensively with the delusional ideas. In 1899, in the 6th edition of his psychiatric textbook , he developed the dichotomy of psychoses , which is still valid today , by contrasting dementia praecox with manic-depressive insanity . The criterion for this dichotomy was the different course: In contrast to dementia praecox (today the group of schizophrenia), the symptoms of manic-depressive insanity (today affective disorder ) recede again. Psychiatric science now knows that this rule does not always apply. For a long time, however, the general tendency was considered undisputed. However, based on the findings of more recent genetic research, this dichotomy can no longer be scientifically maintained. A 2007 publication of the World Psychiatric Association gives a good overview of the controversy surrounding Kraepelin .

In the treatment of mental disorders, Kraepelin relied on the therapies known at the time. He recommended opium , hyoscine and bromine in particular .

On the basis of his research, Kraepelin was able to postulate that psychotic illnesses - called endogenous psychoses as late as 1991 until they were classified according to ICD-10 - arise naturally. Disturbed brain functions were given particular attention and Kraepelin promoted brain research in every way. He paid attention to sociocultural aspects by establishing transcultural psychiatry in 1904. On the other hand, he seems to be in the further developments of psychopathological thinking beyond his clinical-descriptive approach through the methodically precise phenomenological recording of the mental states that patients actually experience , associated with the name Jaspers , to have been hardly interested (although Franz Nissl , Kraepelin's long-term collaborator, valued Jaspers' textbook more than Kraepelin's). This applies even more to research into the psychodynamics of mental events, which researchers such as Freud , Adler , Jung and others were trying to find at the same time .

He did not believe in Freud's interpretation of dreams . However, in 1906 Kraepelin published a longer monograph on language disorders in his dreams (286 role models in total), which he analyzed in his own way. He continued recording his dreams after 1906 until his death in 1926. This second dream corpus - also with language disorders (391 models) - is still in the historical archive of the Max Planck Institute for Psychiatry .

Critics like Dorothea Buck hold Kraepelin responsible for the inhumane methods in German psychiatry in the 20th century. The writer Ernst Toller describes his encounter with Kraepelin during his stay in the psychiatric clinic in his autobiography "Eine Jugend in Deutschland".