Paul Eugen Bleuler (born April 30, 1857 in Zollikon near Zurich ; † July 15, 1939 there ) was a Swiss psychiatrist . He is best known for his achievements in schizophrenia research and introduced psychoanalysis to psychiatry. Bleuler also coined numerous terms in today's psychiatric terminology (including “ schizophrenia ”, “ schizoid ”, “ autism ”, “ ambivalence ”, “ affectivity ” and “ depth psychology ”).

Bleuler's birthplace at Seestrasse 123 in Zollikon

Gravestone at the Zollikon cemetery

Bleuler was born in Zollikon, south of Zurich. The house he was born in is the “ Gugger ” house on Lake Zurich (Seestrasse 123). Eugen Bleuler's father was the farmer Johann Rudolf Bleuler (1823–1898), his mother was Pauline Bleuler (1829–1898). Bleuler attended the primary school in Zollikon and the grammar school in Zurich . He studied medicine at the University of Zurich and graduated in 1881. A mental illness in his sister Pauline (1852–1926) probably contributed to his decision to devote his life to psychiatry .

From 1881 to 1884 Bleuler was an assistant doctor under Rudolf Schärer at the Waldau Institution in Bern , where he received his doctorate from the university . Study trips to Paris to the neurologist Jean Martin Charcot followed , to London and to Munich to Bernhard von Gudden . He then worked for a short time as an assistant doctor to Auguste Forel at the Burghölzli Psychiatric University Clinic in Zurich. In 1886 Bleuler became director of the Rheinau psychiatric clinic . In 1898, against the will of the faculty, he succeeded Auguste Forel as director at Burghölzli and full professor of psychiatry at the University of Zurich. One of his employees at Burghölzli was Carl Gustav Jung from 1900 to 1909 . Bleuler stayed there until 1927 as director. In 1932 he was elected a member of the Leopoldina Academic Academy .

Eugen Bleuler was married to Hedwig Bleuler-Waser . The couple had five children, including the psychiatrist Manfred Bleuler (1903-1994), who later, like his father, became the director of Burghölzli. Bleuler was buried in the Zollikon cemetery.

Bleuler was the first European medical director, deals with the psychoanalysis of Sigmund Freud dealt. In contrast to most scholars of his time, Bleuler did not start from a clear separation between mental health and illness. His work is based on a careful consideration of each individual case and the development of the patient's person. Particularly noteworthy is the preoccupation with the delusional worlds of individual patients and the realistic interpretation of their statements. Bleuler developed what he called Udenus therapy (also Oudenotherapy , from the ancient Greek οὐδεν ouden “nothing” and θεραπεία therapeia “service, care, healing”). The name expresses Bleuler's view that one should not treat illnesses immediately with blind actionism, but rather wait for the illness to develop naturally, which often leads to a cure.

Bleuler became known through his description of schizophrenia (see Symptoms of Schizophrenia according to Bleuler ), which is why it was sometimes also named Bleuler Morbus after him (1911: Dementia praecox or group of schizophrenias ). He coined the term schizophrenia with which he diagnosing dementia praecox by Emil Kraepelin replaced. He did not judge the course of the disease as badly as Kraepelin. Of 515 patients who were admitted to Burghölzli for the first time between 1898 and 1905 because of dementia praecox, 60% could be discharged significantly better. For Bleuler, ambivalence was the main symptom of schizophrenia.

At a time when no drug therapy was available for the treatment of schizophrenia and other mental illnesses, Bleuler often achieved an improvement in symptoms by improving general health conditions and personal attention . He was also one of the first to point out this connection, and brought about a departure from the classic madhouse , which had been little more than a mere custody and not infrequently led to the mental neglect of the sick. Bleuler, like his predecessor Auguste Forel, also represented eugenic and racist views. He propagated and initiated forced sterilization and castration of psychiatric patients.

However, Bleuler did not develop a healing concept. Institutional therapy was based solely on work and employment. The sick were trained to control themselves and in severe cases trained. For the discharge it was necessary to suppress and control disturbing secondary symptoms. This was called " socialization " by Bleuler and his successors .

After the death of Eugen Bleuler, his son Manfred Bleuler continued his work. The new editions of the standard work of his father's textbook on psychiatry , which had first appeared in 1916 and had already contained eugenic conceptions, he obtained from 1937. In the editions that appeared in Germany in 1937 and 1943, Manfred Bleuler added essays by racial hygienists such as Hans Luxenburger and Friedrich Meggendorfer a. In the post-war editions of the standard work, which had been highly regarded for decades, these insertions were deleted again and replaced by references to psychiatric methods such as lobotomy (brain surgery) and neuroleptics (psychotropic drugs).

Bleuler tried to prove synaesthetic perceptions as hereditary but healthy phenomena. He himself had a non-verbal acoustic perception coupling and his sister Pauline had sound and word photisms . He derived his own photism from his mother's inheritance and that of his sister from an additional psychopathic burden on her father's part.

In 1881, together with Karl Bernhard Lehmann, he published his research results in this regard in the work Compulsory Light Sensations through Sound and related phenomena in the field of other sensations. 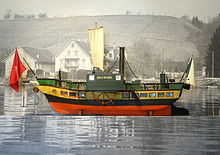 In 1861 Eugen Bleuler's father Johann Rudolf made a ship model for his little son. The model was the paddle steamer Gustav Albert , which began operating on Lake Zurich in 1847 . The model is almost 1.7 meters long and could be heated. It is owned by the Swiss National Museum . Bleuler's birthplace is shown in the background.