Roll bar of a Formula 3 racing car (center, black, above the red E )

Roll-over devices are special installations in vehicles that are intended to protect the occupants in the event of a rollover.

Roll bars are tubular metal constructions that are mostly installed in convertibles and tuned vehicles or in racing and rally vehicles. In the event of a rollover, these constructions are intended to prevent the roof from being dented too much, so that a survival space remains, or in the open convertible, secure the survival space without a roof. In contrast to the roll cage, the roll bar is limited to one level in the longitudinal axis, conveniently the B-pillar . Back braces are useful, but do not change the definition.

Some modern convertibles have active rollbars that snap out in a split second in the event of a rollover.

Closed cars do not have an independent roll bar, but the self-supporting bodies are usually reinforced accordingly in the area of ​​the B-pillar.

Since there have been numerous fatal accidents due to overturning, especially in steep terrain in agriculture and forestry, all newly registered agricultural or forestry tractors and tractors in Austria since 1960 and in Germany since January 1, 1970 must be equipped with overturning devices. Existing machines were required to be retrofitted until January 1st, 1977. Since this is not a statutory regulation of the StVZO in Germany , but rather the accident prevention regulations of the agricultural trade associations , this regulation does not apply to tractors approved for non-agricultural use. In the current version, this is regulated in VSG 3.1 §33 paragraph 2. The driver's cabs, with which the majority of vehicles are equipped today, meet these regulations.

In Switzerland, the obligation came into effect on January 1, 1979. Since then, all new tractors must be equipped with rollover protection. There was no obligation to retrofit in Switzerland. 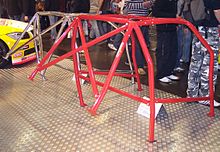 A metal structure is called a roll cage and is mostly installed in vehicles used in motorsport . At the height of the A-pillar and B-pillar, a tube each runs along the contour of the body in the interior. Both pipes extend from the vehicle floor to above the occupants' head height to protect them from injuries caused by deformation of the vehicle. Most of the time, the two main bars are connected by side flank protection and supplemented by a so-called H-brace behind the seats.

For suitability in motorsport , the respective construction must be homologated and meet realistic requirements for material strength and strength. Diagonal struts and a support to the rear are required. The extension of a roll cage then corresponds to a so-called safety cell, which, in contrast to the conventional "cage", fundamentally stiffens the vehicle.

A safety cell provides building on the roll cage better protection of the occupant and a higher rigidity of the body by connections A, B and optionally C-pillar. Connections to the domes at the front and rear are just as important as additional struts in the roof, foot, head and dashboard area. Ideally, the pipe connection points should be welded and reinforced with additional sheets at junctions. The aim is to create sufficient survival space for the occupants, whereby the acceleration values ​​for the occupants must not be too high. In addition to belts, helmets and fireproof clothing, the HANS system provides helpful support from safety cells .