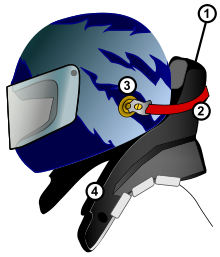 HANS system is a registered trademark and an acronym for H ead a nd N eck S upport ( English for head-and-neck support ) and refers to a frontal head restraint (FHR), so a safety system in motor racing , the racer from strong Protects injuries in the head and neck area. Occasionally it is also written HANS .

Components of the HANS system are a shoulder corset made of carbon fiber reinforced synthetic resin , which is connected to the driver's helmet and fixed under the seat belt of the racing car, as well as a matching helmet with attachment points. It is primarily intended to protect the driver's cervical spine from overstretching ( whiplash syndrome ). In the event of an accident, extreme head accelerations are reduced and the forces acting on the neck and head area are reduced. It also protects the driver from hitting his head against the steering wheel. The basic principle here is that the forces that occur in the event of an impact are absorbed by the belt system and do not act entirely on the neck or spine.

The first versions had a fixed tether system for the helmet, so that the head could hardly be turned sideways. Later, the sliding tethers system was invented, which enables the head to be turned.

The HANS system continues to be criticized by some racing drivers because it protects the driver in the event of a frontal collision, but in the event of a side impact it fixes the neck in such a way that the lateral body movement risks injuring the spine.

Depending on the sitting position (sitting upright, half lying), the angle between the vertical part and the forward-facing, double-sided leg is flatter or more acute. Systems are offered between 10 ° (upright sitting position) and 40 ° (half-lying sitting position). The thickness of the neck is also taken into account with two or three sizes. The various systems differ greatly in weight depending on the material used, there are light versions that are only reinforced with carbon fibers, as well as simpler (heavy) versions made of plastics that are reinforced with other fibers: 1200, 820 and 630 g.

In the mid-1980s, the HANS system was invented by Robert Hubbard, an employee of Michigan State University . Because of their size, the first systems could only be worn in sports cars. The first driver to use the HANS system was Jim Downing , a brother-in-law of Hubbard. In 1997, in cooperation with Mercedes-Benz , a version suitable for Formula 1 was developed, which has been worn since the 2003 season.

A HANS system is mandatory for the following competition series:

From 1 January 2008, it was also in the German mountain racing duty for all car classes except group G and historic cars to Appendix K . In Switzerland, it was still possible to start mountain races without the HANS system until 2008 in groups SS, N and ISN.

In 2009, the Belgian motorsport authority RACB recommended that all participants in the Belgian Mountain Championship wear a HANS system; it has been mandatory since the 2010 season.

Since January 2015, a HANS system has also been mandatory for national rally events of the DMSB . This applies to

Since January 2017, FHR systems have been mandatory in NAVC rally events.

The current FHR systems have been tested in accordance with FIA 8858-2010 homologation .

For some competitions with an FIA rating, for example for Formula 1, the stricter FIA standard 8860-2004 applies .

Helmets can also be retrofitted with HANS clips (8856-2002) so that they can be used with a HANS system. In Europe, however, this combination is only permitted in free events for self-protection.