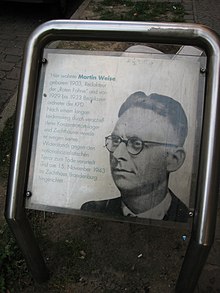 Martin Weise (born May 12, 1903 in Torgau ; † November 15, 1943 in the Brandenburg-Görden prison ) was a German politician ( KPD ) and resistance fighter against National Socialism ( Rote Kapelle ).

Weise, son of a teacher, grew up in Berlin and was initially active in the Wandervogel movement. In 1921 he joined the Communist Youth Association of Germany and in 1927 the Communist Party of Germany (KPD). Weise began to study history and philosophy in 1922 . However, he had to break off his studies in 1924 for financial reasons. Before he became unemployed in 1928, Weise worked for an insurance company for several years. From 1929 to 1933 he was a district councilor for the KPD in Berlin-Neukölln . From 1930 he wrote articles for the central organ of the KPD, Die Rote Fahne . Weise was one of the editors who illegally continued to publish this newspaper even after the National Socialists "came to power " in 1933. In 1933/34 he headed the Reich Committee of the Unemployed in Berlin.

1934, it has been arrested and to three years ' imprisonment convicted, he in the detention center Brandenburg spent. Here he learned that his fiancée Frieda Seidlitz , who had worked as a courier for the KPD, had succumbed to the abuse of the Gestapo while in custody. After his release from prison in 1937, he was transferred to the Sachsenhausen concentration camp . After his release from the concentration camp in April 1939, Weise again contacted his friends, including Wilhelm Guddorf . Weise and Guddorf established connections with the Hamburg communists Bernhard Bästlein and Robert Abshagen and worked on the pamphlet Organized the Revolutionary Mass Struggle . Together with John Sieg , Fritz Lange and Walter Husemann , Weise regularly distributed the underground magazine The Inner Front in Berlin from the end of 1941 , which contained appeals, information about the general situation and references to the broadcasting frequencies of the Moscow radio .