Bernhard Bästlein (born December 3, 1894 in Hamburg , † September 18, 1944 in Brandenburg an der Havel ) was a member of the Reichstag for the KPD and a resistance fighter against National Socialism .

Bästlein came from a social democratic family and was a precision mechanic by trade. In 1911 he joined the socialist workers ' youth , in 1912 the SPD and the metal workers' association.

During the First World War he was a soldier on the Western Front for two years . After the war he was elected to a soldiers' council. In 1918 he joined the USPD and joined the KPD with its left wing in 1920. In 1921 he was elected as the youngest member of the Hamburg parliament. In March 1921 he took part in the Central German uprising of the KPD, was wanted by the police and fled to the Soviet Union . There he edited a German-language farmer's newspaper and worked as a metal worker. At the beginning of 1923 he returned to Germany and edited party newspapers in Dortmund , Hagen , Wuppertal , Remscheid and Solingen , where in 1929 he was editor-in-chief of the Bergische Arbeiterstimme . In 1929 he became KPD sub-district leader in Düsseldorf , in February 1931 political leader of the KPD district Middle Rhine, in 1932 a member of the state parliament in Prussia and in March 1933 a member of the Reichstag .

After the seizure of power of Hitler Bästlein took on 7 February 1933, the illegal meeting of the Central Committee of the Communist Party in the sports store Ziegenhals in Berlin part and organized the illegal work of the party in Cologne.

In May 1933, the National Socialists arrested Bästlein, sentenced him to 20 months in prison for “preparing for high treason” and locked him in the Esterwegen , Dachau and Sachsenhausen concentration camps for another five years after the sentence had expired . In 1940 he was released and found work as a precision mechanic in Hamburg. There, in 1941, together with Franz Jacob and Robert Abshagen, he built up the communist resistance organization Bästlein-Jacob-Abshagen-Gruppe , which first operated in shipyards in Hamburg and later formed a north German network with contact to Flensburg , Kiel , Lübeck , Rostock and Bremen . These connections were supervised by individual leaders in order to reduce the risk of exposure of the entire organization.

Ehrenfeld : behind the pillar first row on the right, last stone for the Bästlein couple

On October 15, 1942, Bästlein was arrested at his place of work in the Riepe works in Altona. The arrest took place in connection with the search for Erna Eifler by the “ Rote Kapelle ” special commission . When he tried to escape, he was shot, initially taken to Fuhlsbüttel detention center and severely tortured. In early 1943, the Gestapo applied for 61 arrest warrants against members of the Bästlein-Jacob-Abshagen group .

In November 1942 he justified his illegal resistance to the Gestapo : During the seven years of prison and concentration camp imprisonment from 1933 to 1940 he had experienced terrible things; his " conviction that a social order in which such things as I experienced must be eliminated " has become fundamental. The Second World War , which began in 1939 , “ awakened all memories of the war from 1914 to 1918 and strengthened his conviction that as long as the capitalist social order exists, such wars will continue to break out all humanitarian impulses in human society and immense material goods ” .

In the summer of 1943, Bästlein was to be sentenced to death by the People's Court in Berlin. An air raid on the prison in Berlin-Plötzensee enabled him to escape in January 1944. In the turmoil of the air attack on November 22nd, Bästlein and an old Hamburg friend, Alfred (Alf) Raddatz , managed to occupy a cell together. Raddatz gave Bästlein the address of his companion Johanna Falcke and gave him a pipe as a sign of identification. In another air raid on 29/30. Bästlein managed to break out on January 1st. He reached Johanna Falcke, who found him quarters with Willi Jung- noon. At midday, Bästlein arranged further accommodation with Walter Glaß and his daughters Vera Wulff and Lucie Nix in Zehlendorf . Wulff introduced Bästlein to Ernst Sieber , who got him a Reichsbahn service card in the name of Ernst Wiechmann and a pistol. Through Otto Marquardt and Walter Glaß he succeeded in establishing a connection with the operational management of the KPD around Anton Saefkow and Franz Jacob and in helping to create an illegal network for the Free Germany Movement in Berlin-Brandenburg. Through a denunciation by the Gestapo spy Ernst Rambow , he was arrested again on May 30, 1944, sentenced to death on September 5, and beheaded with the guillotine on September 18, 1944 in the Brandenburg-Görden prison .

On September 8, 1946, Bernhard Bästlein’s urn, which was transferred to Hamburg, was buried in the honor grove of Hamburg resistance fighters in the Ohlsdorf cemetery , and in the field of honor of the Geschwister-Scholl-Foundation there is a joint pillow stone for Johanna and Bernhard Bästlein, grid square Bo 73, No. 1

In 1920 Bernhard Bästlein married Johanna Zenk from Hamburg, their son Bernt Henry Jürgen was born in 1932.

The story Up to the Last Breath by the writer ER Greulich was based on motifs from the life of Bernhard Bästlein .

In the memorial for the anti-fascist resistance fighters executed in the Brandenburg-Görden prison in Brandenburg an der Havel, Bernhard Bästlein is prominently mentioned as one of four executed.

From 1975 the area between Herzbergstrasse, Landsberger Allee and Weißenseer Weg in East Berlin was built with new residential buildings. The newly laid streets in the later independent district of Berlin-Fennpfuhl were named after German resistance fighters; one street was named after Bernhard Bästlein. In Magdeburg , Leipzig and Rostock streets also bear his name.

In Berlin (Scheidemannstrasse / Platz der Republik, near the Reichstag ) one of the 96 memorial plaques for the Reichstag members murdered by the Nazi regime has been commemorating Bernhard Bästlein since 1992 . 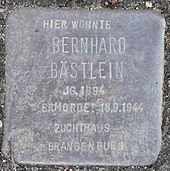 A stumbling block was laid for him at Goldbekufer 19 in Hamburg-Winterhude in his native Hamburg .

On June 8, 2012, stumbling blocks were laid in front of the Hamburg City Hall for the murdered members of the Hamburg Parliament, including another for Bernhard Bästlein.