Saefkow was born in the apartment of his parents, the tailor Anton Saefkow and his wife Fanny. Ludwig was born at Alte Jacobstraße 69. He joined the Communist Youth Association of Germany (KJVD) as a locksmith's apprentice in 1920 , and moved up to its Berlin line in 1922. Since 1923 he was a member of the Central Committee of the KJVD. In 1924 he joined the Communist Party of Germany (KPD). As early as 1927 he became KPD secretary in Berlin, then in Dresden . From 1929 to 1932 he headed the trade union work of the KPD district Ruhr and was head of the RGO in the Ruhr area . In 1932 he became political leader of the KPD district of Wasserkante. In December 1932 he married the RGO secretary Theodora Brey in Hamburg .

From April 1933 to April 1934 the National Socialists locked him up in the Fuhlsbüttel concentration camp , then for two and a half years in the Fuhlsbüttel prison for “preparation for high treason”. In 1936 he was interned in the Dachau concentration camp . There he and other communist prisoners took part in training courses, the " Red Aid " and an illegal memorial service for Etkar André . After denunciations, the public prosecutor arranged for the Hamburg special court to interrupt the prison sentence for 25 prisoners and handed them over to the police, who took them into " protective custody " at the Hamburg police station . Because of his resistance activities in the Dachau concentration camp, the Hamburg Higher Regional Court sentenced him to another 30 months, which he spent in the Fuhlsbüttel prison and in its Schülp subcamp.

In July 1939 he was released from prison; soon he was again operating illegally. He divorced and married Anna Thiebes ( Änne ) in 1941 . After the attack on the Soviet Union began in mid-1941 , he built the KPD's largest resistance group in Berlin, the KPD's operational management. In 1944, together with Bernhard Bästlein and Franz Jacob, he led the group that agitated against the war in Berlin armaments factories and called for acts of sabotage. In April 1944, the social democrat Adolf Reichwein contacted Saefkow in order to involve the Saefkow-Jacob-Bästlein-Organization in the conspiracy of July 20, 1944 . These efforts were made with knowledge and in consultation with Claus Schenk Graf von Stauffenberg . The communists met with Reichwein and Julius Leber , but a Gestapo spy ( Ernst Rambow ) was present. Saefkow was arrested on July 4, 1944, sentenced to death on September 5, and executed with the guillotine on September 18 in Brandenburg-Görden prison. He left behind his wife Änne and two children. His daughter Bärbel Schindler-Saefkow (* 1943) is a historian and chairwoman of the German Peace Council. V.

"With this letter I want to thank you, my comrade, for the great and beautiful things that you have given me in our life together ... Only today, with these lines, do I have the first wet eyes after the judgment because of the thoughts of you . Because the mind holds back the pain that could tear me apart. You know I'm a combative person and I will die bravely. I always only wanted the good ... "

- Anton Saefkow to his wife Änne shortly before his death 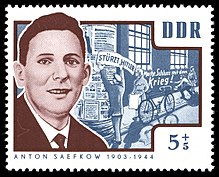 Anton Saefkow on a GDR postage stamp, 1964 ; In the series: For the preservation of the national memorials and memorials ( anti-fascists and concentration camp victims)