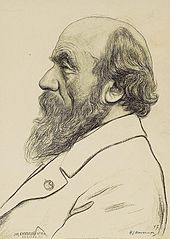 Petrus Josephus Hubertus Cuijpers , surname commonly spelled Cuypers , also called Pierre by first name , (* May 16, 1827 in Roermond ; † March 3, 1921 ibid) was a Dutch architect as well as an arts and crafts entrepreneur. He is considered one of the most important architects of historicism . In the last quarter of the 19th century, Pierre Cuypers led the construction or renovation of numerous buildings, especially churches, in the Netherlands and other countries. 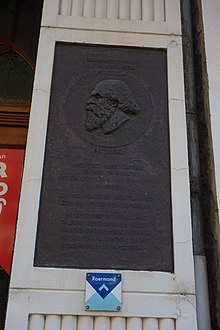 Pierre Cuypers was born as the ninth and youngest child of the married couple Joannes Hubertus Cuijpers (1769-1858) and Mara Joanna Bex (1781-1874). His father was a merchant and church painter by profession. After attending the Stedelijk College in Roermond, Pierre Cuypers completed an architectural training at the Art Academy in Antwerp between 1844 and 1849. His teachers included Frans-Andries Durlet , Frans Stoop and Ferdinand Berckmans, pioneers of neo-Gothic in Belgium. He got to know the works of the leading English neo-Gothic Augustus Welby Northmore Pugin through Durlet, who was personally acquainted with Pugin. Pierre Cuypers passed the final exam in 1849 with a first prize for designs in the classical and neo-Gothic styles as well as in the subject of monument preservation. After graduating, he returned to his hometown Roermond, where he got engaged to his first wife Maria Rosalia van de Vin, a milliner from Antwerp, in 1849.

Drafts for a workers' estate that he had worked out with his fellow student Peter Dens were awarded a cash prize in 1850. Cuypers used the prize money for a study trip along the Lower Rhine between Xanten and Bonn. He married his fiancée on November 26, 1850, and she died on November 7, 1855. This marriage resulted in two daughters.

The city of Roermond appointed him their city architect with effect from January 1, 1851, a position he held for almost four years. In 1852, the Cuypers moved into the official apartment of the city architect in the former penitent monastery in Munsterstraat. One of his first official construction matters was the construction of a new ferry house at the confluence of the Rur and the Meuse not far from the Roermond Christoffelkathedraal . In the same year he entered into a partnership with the Roermond textile entrepreneur Francois Charles Stoltzenberg senior; They founded a studio for Christian sculpture, which later traded as Cuypers and Stoltzenberg, a studio for Christian sculpture, church painting and church furniture of all styles (note: company translated here into German).

In 1858 the French art historian and archaeologist Adolphe-Napoléon visited Didron Cuypers and his workshops in Roermond. At that time the company employed six draftsmen. 84 employees were busy making sculptures , altars and other church furniture.

On March 1, 1859, Pierre Cuypers married again, namely Antoinette Catharine Thérèse Alberdingk Thijm, known as Nenny. Nenny Cuypers was the sister of his friend Joseph Alberdingk Thijm and spoke German, Italian, French and English. She was also a talented singer and painter and worked in the Cuypers and Stoltzenberg company not only in the office, but also in the design. The marriage resulted in three daughters and two sons. The first-born son from this connection, Joseph Cuypers (* June 10, 1861, † January 12, 1949) also became an architect and a close collaborator of his father, as well as, after the dissolution of the company with Stoltzenberg, partner in the newly founded company from 1892 Cuypers & Co.

In 1864 the couple moved to Amsterdam with their children ; Then in 1892 back with the two younger daughters to the province of Limburg, to Valkenburg aan de Geul . After the death of his second wife in 1898, Pierre Cuypers moved back to his hometown, and in the same year he handed over the management of the workshops to his son Joseph (known as Jos).

Cuypers was also active in the training of the arts and crafts and drawing talent. At his instigation, the Rijksschool voor Kunstnijverheid (state school of arts and crafts) and the Rijksnormaalschool voor Tekenleraren (state art school for drawing teachers) were established in Amsterdam in 1891. He worked as a teacher at both schools.

It is believed that Pierre Cuypers was a synesthete .

The Rijksuniversiteit Utrecht awarded Pierre Cuypers an honorary doctorate in 1886 ; another honorary doctorate followed in 1907 by the Technical University of Delft . Pierre Cuypers was among other things a member of the Third Order of St. Dominic, Grand Officer in the House Order of Orange , Commander of the Order of the Dutch Lion and Grand Cross Knight in the Order of Orange-Nassau . In 1896 he was accepted as an external member of the Académie des Beaux-Arts .

The first church design by Pierre Cuypers to be realized was the church in Oeffelt , Province of Noord-Brabant (1853). One of his first major commissions was the restoration of the minster church in his hometown (1859). He also designed, for example, the neo-Gothic church of St. Catharine in Eindhoven (1859). During the restoration of the east group of the Mainz Cathedral in the 1870s, he had it carried out according to his own plans in mainly Romanized forms. As a counterpoint to the existing west tower, he created the tall, rather Gothic -looking east tower helmet, which replaced a Gothic bell storey and the iron dome by Georg Moller . One of his most important churches is St. Bonifatius in Leeuwarden (1882–1884).

In his neo-Gothic church buildings, Cuypers initially oriented himself stylistically on the early French Gothic, but had the buildings made of brick. From around 1870 he increasingly used elements of the Dutch Gothic. However, Cupyer's hand also created designs for smaller objects such as houses or chapels.

In 1877 he began the construction of the Reichsmuseum in Amsterdam, which was opened in 1885 . It is considered to be Cuyper's most important work alongside Amsterdam Central Station . Both buildings are stylistically closer to the Dutch Renaissance and therefore not only in terms of function but also in terms of style, special cases of his work. The Sint-Martinuskerk in Groningen was established in 1895.

The restoration of the Kasteel de Haar in Haarzuilens near Utrecht into an extensive palace complex, which lasted until 1912, followed from 1892. The castle, one of the largest castles in the Netherlands in the Middle Ages, was just a ruin without a roof. The project for Baron Etienne van Zylen van Nyevelt (1860-1934) and his wife Hélène de Rothschild (1863-1947), which also included the building of a church and the relocation of the entire village of Haarzuilens, developed into a real major contract for Cuypers and his company. Cuypers not only provided the designs for the buildings and the sculptures, but also, apart from the baroness's apartment, for the smallest details of the interior design. Furthermore, the furniture down to the cutlery and the uniforms of the servants was designed by the Cuypers company. Some of the items of equipment were made by them themselves, but some, like the cutlery, were also given to third parties. The building was equipped with state-of-the-art heating, electrical lighting and a large number of bathrooms. In order to make the trapped rooms of the original main castle accessible independently of one another, richly formed circumferential galleries were added around the inner courtyard. This was roofed over so that it could be used as a large, cathedral-like hall according to the client's wishes.