Valkenburg aan de Geul ( listen ? / I ; Limburgisch Valkeberg , German Falkenburg an der Göhl ) is a municipality in the Netherlands , province of Limburg , with 16,496 inhabitants (as of January 31, 2019). It includes the tourist village of Schin op Geul (with many guest houses and campsites), the villages of Berg, Terblijt, Houthem-St. Gerlach (with castle, currently a luxury hotel) and the town of Valkenburg.

Valkenburg is located on the little river Geul , which rises in the area of ​​the Belgian village of Eynatten , municipality of Raeren, not far from Aachen, and flows into the Maas at Meerssen . This river has dug a 50 to 100 meter deep valley into the marl layer , which has contributed to the formation of beautiful viewpoints in the hilly landscape. Because this landscape is unique in the Netherlands, many Dutch people spend their holidays here, especially before 1960, when traveling abroad was difficult and expensive. The region is a popular hiking and cycling area because of its topography . The area is rich in small forests and grasslands because of the calcareous soil on which rare orchids and other protected plants grow.

A target ascent known in cycling is the Cauberg . Because of him and other difficult climbs in the vicinity, Valkenburg has already hosted several world championship races and other important cycling races, such as the Amstel Gold Race , the goal of which is the Cauberg every year. In 2006 he was also the destination of a stage of the Tour de France .

The municipal council has been formed as follows since 1981:

a Due to the merger of Valkenburg-Houthem and Berg en Terblijt to form the new municipality of Valkenburg aan de Geul on January 1, 1982, the municipal council elections took place in 1981.
bThe Progressieve Groene Partij is an amalgamation of the parties GroenLinks , PvdA and the Progressieve Partij Groot Valkenburg.
c The local party Inwoners Belang Groot Valkenburg went into the Algemeen Belang party in the 2010 municipal council election.
d In 1986 the Inwoners Belang party ran as "Lijst Stassen".
e Up to and including 1986, the Groot Valkenburg party was called "Lijst Simons".
f Lijst Frissen participated in the elections up to and including 1986 as "Lijst Van Kempen".
G The Lijst Geurten dissolved into the Algemeen Belang party in the subsequent local elections.

College of Mayors and Aldermen

The following people belong to the college : 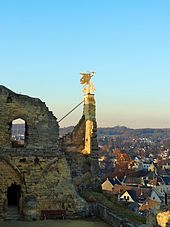 Valkenburg ruins above the old town

Valkenburg has been one of the most important holiday destinations in the Netherlands since around 1840, and tourism is the municipality's main source of income.

On a hill in the city lies the ruins of Valkenburg , the remains of the only hilltop castle in the Netherlands. All other Dutch castles are or were water castles . The rule of Valkenburg in the Duchy of Brabant had widespread property in the late Middle Ages. Also the place Huerth in Cologne Valkenburg was loan fee .

Until 1942 the city housed the theological faculty of the Jesuits , which were banned by the Jesuit Law until 1917 as a result of the Kulturkampf in Germany and only moved their training center to Frankfurt am Main ( Philosophical-Theological University Sankt Georgen ) after the Second World War . From 1942 to 1944, the Reich School of the Netherlands , a national political educational institution for boys, was set up in the rooms of the Jesuit monastery.

The small museum Land van Valkenburg is located in the middle of the old town . Here you can find information about the history of South Limburg and Valkenburg as well as works of art by local artists.

The community is rich in small castles, some of which are used as hotels or restaurants. A total of six former stately homes are located in the municipality: Castle Genhoes , Castle Schaloen , Castle Oost , Castle Den Halder , Castle St. Gerlach and Castle Geulzicht . The much-visited Fluweelengrotte and Gemeentegrote made of marl rock are not natural caves , but passages in former stone pits. During the Second World War , the marl grottos served the population as air raid shelters . The rather soft rock is easy to mine and work. Many buildings have been built from this material. In the Gemeentegrote a wrong trackless train .

You can get to know the mysterious underground world of mining in an old coal mine (Steenkolenmijn Valkenburg). Former pals explain the coal mining in this old mine.

Above the old town and the Valkenburg is the Wilhelminatoren observation tower , which can be reached via a cable car.

Significant remains of the medieval city wall have been preserved, including two small city gates. From these the path leads to a small, romantic old town, in which many street cafes and bars are lined up.

Valkenburg also has a thermal bath ( Thermae 2000 ), an open-air theater and a casino.

The Oost Castle with its adjoining manor house on the Oostergats the river Geul is located east of the town of Valkenburg. In 1587 it belonged to the Drost of the Land of Valkenburg. The castle is a national monument ( Rijksmonument ).

It was reported about the late medieval castle in Limburg in the Netherlands: "This is where the International Butler Academy resides , the strictest butler training in the world."

Valkenburg can be reached from Maastricht, about 12 kilometers away, by train or via the A79 motorway; There are also direct trains from Heerlen . The town's train station dates from 1849 and was built for the Aachen – Maastricht line that opened in 1853 . It is the oldest of its kind in the Netherlands and is a listed building. The architectural style is based on the palace of the then ruling King of the Netherlands. A small café is housed inside the building. Until at least 1993 there were direct express trains on Saturdays during the Dutch summer holidays from Amsterdam , The Hague and Zwolle via Maastricht to Valkenburg (and back), which were referred to in the timetable as Valkenburg Expres .

Valkenburg is approx. 30 km away from Aachen and can be reached via the A4 and on the Dutch side via the A76 and A79. A nice alternative route leads from Aachen via Vaals and Gulpen-Wittem ( N278 and N595) to Valkenburg.

In 1989 Valkenburg hosted the 8th  European Shooting Festival , an event organized by the European Community of Historical Shooting .

Christmas market in the Fluweelengrot

From mid-November to the first week of January, Valkenburg is transformed into “the” Christmas city of the Netherlands. In addition to the traditional Santa's Village Christmas market in the old town, there is also the opportunity to visit the Christmas markets in the Gemeentegrot and Fluweelengrot .

At MergelRijk you can find out more about the various Christmas varieties of marl and grottos. Twice a week the Christmas parade moves through the village with imaginative groups of feet and illuminated parade floats.

Municipalities in the Dutch province of Limburg