The Heidekampgraben is a moat in Berlin's glacial valley . It is located in the Berlin district of Treptow-Köpenick , in its southern part on the border with the Neukölln district . The now largely stagnant, around 3.5 kilometers long body of water connects the Britzer connecting canal, built between 1900 and 1906, with the Spree in Treptower Park . The original source of the Heidekampgraben was south of the canal on the site of the Späth tree nursery in the Baumschulenweg district named after it .

During the division of Germany , the southern part of the trench marked the border between West and East Berlin . After the fall of the Wall and the opening of the Wall , the Heidekampgraben green corridor with play and recreational areas, bridges and footbridges was created along the trench over a length of 2.5 kilometers , partly as a nature conservation law replacement measure for the impairment in nature and landscape due to the construction of the federal motorway 113 on the Teltow Canal . The green corridor is part of the Berlin Wall Trail .

Course of the trench

The Heidekampgraben begins west of the nursery bridge on the Britz connecting canal. It is located in its southern section in the Treptow-Köpenick district of Baumschulenweg on the border with Neukölln . The first 150 meters from the canal to the Heidekampbrücke on Neuköllnische Allee / Forsthausallee, the trench is piped underground in an allotment garden colony. At the bridge, the water emerges from a grid to the north. The now visible trench is around 25 meters wide, the bottom width is around three meters.

Shortly after the bridge, he reaches the High-Deck-Siedlung , a large housing estate from the 1970s / 1980s with around 6,000 residents in Neukölln. The urban planning concept of the eponymous high decks - elevated, greened paths - for the structural and functional separation of pedestrians and car traffic was considered innovative during the construction period of the settlement. The moat limits the settlement to the east, circumnavigates it in an east loop after crossing under Sonnenallee and then turns to the northwest. To the east of the Köllnische Heide S-Bahn station , it crosses the Baumschulenweg – Neukölln line . On the S-Bahn route, the ditch changes from the Baumschulenweg district to the Plänterwald district, which is also Treptow-Köpenick . In the further course, the width of the sole narrows to around one meter; In addition, the water is no longer deepened in a trench, so that the bottom and trench widths are identical.

After the Dammweg it bends again strictly to the north and leads through further allotment gardens to Kiefholzstrasse, on which its western side leaves the Neukölln area and the former inner-German border; Both sides of the trench are now in the Plänterwald district. At the Plänterwald S-Bahn station , it crosses under the route of the Görlitzer Bahn , passes another arbor colony and after the street Am Treptower Park arrives in the park of the same name in the Alt-Treptow district . In the 88.2 hectare park, which was laid out between 1876 and 1888 according to plans by the municipal gardening director Gustav Meyer , the Heidekampgraben flows through the carp pond and turns to the northeast when it emerges from the lake. In the park, the sole width is up to three meters again, and around five meters in the mouth area. Passing the historic Archenhold observatory from 1909, the ditch reaches the Spree, into which it flows at the Gasthaus Zenner opposite the Insel der Jugend after a total of 3.5 kilometers.

Original headwaters in the Königsheide

The source of the Heidekampgraben lay in a swamp and heathland of the Königsheide , which is a relic of the formerly extensive forest areas of the Köllnische Heide south of the Spree. The river drained the sandy-boggy Berlin glacial valley in the forest area to the Spree. In the late Middle Ages , the valley areas of the Spree were settled and large areas of the Köllnische Heide were used as pastureland. With increasing industrialization and urbanization , large areas were cleared for residential and industrial construction. The source area of ​​the river moved to the western edge of the remaining Königsheide. In 1863 Franz Späth bought the site on which the spring was located and built what was then the largest tree nursery in Europe in what would later become Späthsfelde .

Around 300 meters north of the tree nursery that still exists today, the Britzer Connection Canal (BVK), known as the Britzer Branch Canal until 1992, has passed since 1900/1906 . The 3.39 kilometer long federal waterway shortens the connection between the Teltow Canal and the Spree-Oder waterway . Since the construction of the canal, the Heidekampgraben has started, initially piped, on its north bank on an allotment garden between the Britzer Allee bridge and the Baumschulenbrücke bridge. The short, southern section of the Heidekampgraben from the canal to its former source on the nursery site is no longer available or is also piped. An artificially fed pond in the Späth-Arboretum testifies to the old spring and an old rusted railing on the corner of Späthstraße and Königsheideweg (opposite the KGA Britzer Allee ) from the old watercourse of the Heidekampgraben.

Seal of the rural community Treptow with the Heidekampgraben, around 1875

later also as the coat of arms of the Berlin district of Treptow, from 1920

The farmers originally called the ditch "Kuhgraben" or "Hedekampsche". The name is made up of Hede = Low German term for heather and kamp = loan word from the Latin word campus , which usually denotes an enclosed field. The names indicate that the stream was used as a natural boundary for fields or pastures, possibly also as a watering place for the cattle.

The area where the Heidekampgraben flows into the Spree is considered the cradle of Treptow . The Trepkow Vorwerk or Treptow Vorwerk , from which the place emerged, was very likely on the site of today's Gasthaus Zenner. Although the watercourse in the coat of arms of the former city district of Treptow now stands for the Spree and the Dahme , it originally symbolized the waters at the origin of Treptow: the Heidekampgraben and the Spree. The forerunner of the coat of arms, a seal of the former rural community Treptow from around 1875, clearly shows a stream that flows into a river at the bottom left.

Children killed on the Berlin Wall

On March 14, 1966, the two children Jörg Hartmann and Lothar Schleusener were shot by the border troops of the GDR when they tried to crawl through a pipe in which the Heidekampgraben was led through under the barriers. At 10 and 13 years of age, the children are among the youngest victims of the Berlin Wall , who died as refugees on the Berlin Wall . Although the fatal shots also infringe applicable GDR law - the use of firearms determining the GDR forbade the use of the weapon against children specifically - the incident was from the State Security hushed up and kept secret. In 1999, a memorial designed by the sculptors Rüdiger Roehl and Jan Skuin was erected in memory of the 15 people who perished at the Berlin Wall in the Treptow district . The memorial was erected on Kiefholzstrasse at the spot where Jörg Hartmann and Lothar Schleusener were shot. The plaque at the foot of the memorial bears the inscription:

- Inscription on a plate of the memorial

The wall memorial was integrated into the new Heidekampgraben green corridor in 2006.

After the border fortifications had been dismantled, the Heidekampgraben green corridor was laid out in several steps on both sides of the water, which runs on the east side as part of the Berlin Wall Trail over 2.5 kilometers from the Britz connecting canal to Kiefholzstrasse. The path on the west side is part of the Neukölln garden culture path as route 2 Köllnische Heide - Heidekampgraben . As of 2008, the green corridor is listed in the Berlin landscape plan directory , which contains the data records reported to the Federal Agency for Nature Conservation . 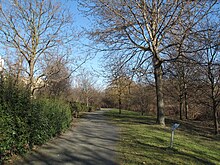 Green corridor at the high-deck estate

Bridge of the Alt-Treptow road in Treptower Park ; in the background the Gasthaus Zenner

The work on the Treptow fallow land of the former wall was completed in 2006. They took place as a substitute measure under nature conservation law for the impairment in nature and landscape through the construction of the federal motorway 113 on the Teltow Canal . At a total cost of around 1.5 million euros, a generous, shared footpath and bike path was built as part of the supraregional Wall Trail and the ditch was vegetatively recultivated. The design was based on plans by the Magdeburg landscape architecture office Lohrer und Hochrein, which won a competition with its ideas as part of a VOF process .

On the 10.5  hectare green corridor, along the oak-lined main path and on new meadows and lawns, relaxation areas with bench elements and play areas were created. Numerous side roads connect the surrounding residential areas. In the edge areas, there was a supplement with extensive and intense green, flowering trees and meadows close to nature. In some areas, the vegetation that had developed after the demolition of the border fortifications - especially birch, locust and weeping willow  - was supplemented by wild fruit trees. Numerous new wooden bridges over the Heidekampgraben connect the parts of the city that were separated until 1990.

Expansion of the west side as a qualification measure

Paths were laid out on the west side of the trench in Neukölln as early as the 1980s. A comprehensive redesign took place here in the summer of 2001 at the high-deck settlement , which had developed into a social hotspot through segregation after the fall of the Wall .

The redesign was carried out by the district management established in 1999 together with Stattbau GmbH and the Senate Department for Urban Development in the summer of 2001 as a qualification and employment measure for residents of the settlement. The lush ruderal and spontaneous vegetation that had formed on the former border river was thinned out and the watercourse made visible again. New green areas, quiet areas with benches and a playground were created. Children from the neighboring daycare centers and elementary school designed a bench for the playground with tile mosaics, planted perennials and took part in the design and construction of a nature discovery trail. The project costs of around 200,000 euros were financed, among other things, from the Berlin state program “City-wide measures - ModInst city-wide”.

The water is piped under the Kiefholzstrasse and the Baumschulenweg – Neukölln connecting railway . There are bridges or culverts on Alt-Treptow , Am Treptower Park and Dammweg . The Dammwegbrücke was demolished in 1998 and rebuilt as an arched bridge with red clinker bricks. The high round arch passage of the Görlitzer Bahn was renovated in the course of the route renovation in 2006/09. The passage is also passable for pedestrians on a wooden footbridge. In addition to the Dammwegbrücke, only the Heidekampbrücke (Neuköllniche Allee / Forsthausallee) at the southern beginning of the trench and the Treptower Park Bridge at the end of the trench to the Spree bear names. Like the four other park bridges, the Treptower Park Bridge after restoration in 1995/96 consists of steel girders with a span of 5.25 m and is provided with an 8 cm thick planking. The abutments are made of reinforced concrete and faced with clinker bricks .