The tree nursery Späth ( company : Späth'sche Baumschulen Handel GmbH ) is a tree nursery on Späthstrasse in the Treptow-Köpenick district of Berlin . The company in the Baumschulenweg district is one of the oldest in Berlin and goes back to a fruit and vegetable nursery founded by Christoph Späth in Kreuzberg in 1720 . After moving to the rural community of Britz behind the then city limits and the expansion of the area, the Späth'sche tree nursery was the largest tree nursery in the world with around 225 hectares in 1900  .

The Späth Arboretum, laid out in the style of English landscape gardens by Franz Späth from 1879 onwards, is located on the site . Since 1966, it has been open to everyone on some days of the week during the summer months. The rest of the time, it is used by the Biology Faculty of Berlin's Humboldt University with around 200 students for teaching, research and public relations.

Memorial plaque on the manor house

Christoph Späth (1696–1746) bought a first piece of land on Am Johannestisch street east of Hallesches Tor in Kreuzberg for 300 thalers . After his death, his son Carl Späth continued the business from 1746. In order to expand plant cultivation, he moved the business to Luisenstadt on Köpenicker Straße in 1760 . This enabled the cultivation area to be increased to eight Prussian acres . That corresponds to about two  hectares . After Carl Späth's death in 1782, his wife Anna continued the business, followed by their son Friedrich from 1792. Under his direction, the fruit and vegetable market was transformed into a model institute and a place of study in accordance with his scientific and artistic interests.

Friedrich Späth's son Ludwig took over the nursery in 1831. His main interest was growing flowers and he shifted the focus of the nursery to growing flowers and potted plants. These were increasingly sold nationwide, so that the first price lists were printed as early as 1856 and also sent abroad. The first catalog appeared in 1862.

A year later, Franz Späth bought the tree nursery from his father and in the following years he acquired large areas of the Cöllnische Heide, which was cleared by 1840 in the area that would later become Berlin-Baumschulenweg . He named the company in memory of his father L. Späth , under which name it was entered in the commercial register in 1903. By the end of the 19th century, the largest tree nursery in the world developed on this site with a fully planted area of ​​120 hectares. A representative mansion was built in 1874 on the site that has served the Humboldt University as an institute building since the 1950s . In addition to the manor house, Franz Späth had an arboretum built in the English garden style by the Berlin city gardening director Johann Heinrich Gustav Meyer , from which the later Späth arboretum emerged .

In 1890 the tree nursery got a railway connection of the Görlitzer Bahn with the Baumschulenweg station .

Bismarck plants a tree in the Späth tree nursery

At that time, the tree nursery had such a great reputation in Germany and around the world that numerous celebrities were among its customers. Franz Späth was the personal gardening advisor to Reich Chancellor Bismarck and General von Moltke . He knew how to use these relationships skillfully for his company. So Bismarck and Count Moltke each planted a linden tree in front of the Späth house. For the 200th anniversary of the company, the former Kaiser Wilhelm II gave the tree nursery a mountain ash from his park in Doorn , which was planted by his second oldest son, Prince Eitel Friedrich von Prussia . General von Gluck planted a spruce and the Grand Duke of Oldenburg a laurel cherry .

Catalog of the tree nursery Späth 1898

Catalog of the tree nursery Späth 1900

In 1911, Hellmut Späth , Franz Späth's son, initially joined the company as an authorized signatory before taking over sole management in 1912. He had studied botany and philosophy in Berlin and Cambridge and received his doctorate at the Agricultural University .

Hellmut Späth joined the NSDAP as early as 1933 . His company profited from these contacts and received orders for the greening of motorways, for the construction of the Olympic Stadium in Berlin and the airport in Tempelhof. Späth's first wife and thus also the daughter from this marriage were Jewish, and Späth also employed Jews in his tree nursery. In 1943 Hellmut Späth was arrested and sentenced to one year imprisonment for “dealing with Jews and hidden propaganda and rooting out work against Germany”. He was deported to the Sachsenhausen concentration camp and murdered on February 15, 1945.

After the Second World War , most of the areas in Baumschulenweg were devastated and the buildings damaged. Many gardeners died in the war. The company was transferred to trust property by the German trust agency on December 8, 1947 and public property in 1949 . The Berlin tree nursery was affiliated with VEG Saatzucht Dresden, the tree nursery in Ketzin was continued as the VEG tree nursery Ernst Thälmann , which specializes in fruit tree cultivation . Even in the GDR era , tree nurseries continued to grow successfully. These varieties gained recognition, prizes and medals at exhibitions at home and abroad.

Tree quarters of the tree nursery VEG Saatzucht in Späthsfelde, 1977

Hellmut Späth's daughter, the journalist and television presenter Dagmar Späth, founded a new tree nursery in Finckensteinallee after the war. After she was killed in a car accident in 1959, the company existed in Zehlendorf until 1970.

After the reunification , the business came under trust management again and was transferred back to the heirs of the Späth family in the spring of 1997. Initially, a community of heirs continued the tree nursery, which included Manfred Späth, son of Hellmut Späth. A few years later it was transferred to a consortium with the partners Georg Graf zu Castell-Castell and Felix Gädicke, Christian von Stechow and Christoph Rechberg.

In 2018 the tree nursery relocated most of its cultivation areas to Brandenburg. The reason was fee demands from the BSR , which are not acceptable for the company.

The branches in Falkenrehde and Ketzin

Since the expansion possibilities in Berlin were limited due to the urban location, Franz Späth acquired a site in Falkenrehde near Potsdam in 1895 in order to establish a branch of the tree nursery there. Here he had the opportunity to gradually enlarge the area by purchasing a total of five farms.

The construction of the Teltow Canal and the Britzer Branch Canal also led to a drop in the groundwater level from around 1900, which meant that some areas of the tree nursery on Baumschulenweg could no longer be used economically and had to be abandoned, which is why the branch in Falkenrehde was further expanded.

In 1917 Hellmut Späth gave up the area in Falkenrehde after he had bought the manor Albrechts von Ketzin in Neu-Ketzin , on which he was building a new tree nursery. The new location had the advantage that it had a rail connection, which made it much easier to send tree nursery products by rail. The estate acquired by Späth included a total of 1700 acres of land, on which Späth set up a tree nursery, which among other things had a packing shed and its own siding.

In 1924 Hellmut Späth bought the villa of the former brickworks owner Mannheimer on the road to Vorketzin. The brick factory was closed after the First World War . Hellmut Spät was regularly in Ketzin to monitor the nursery and wanted to live in the villa and receive business partners during his stays. He renovated and modernized the building, which was on a hill, very costly. Among other things, he had a roof terrace built, which offered an extensive view of the tree nursery area.

In order to be able to further expand the Ketzin location, Späth built dormitories for the workers of the tree nursery and advocated the construction of a single home and a middle school for the children of the senior employees in Ketzin. He planned to turn Ketzin into a garden city and began building an arboretum in Ketziner Bruch as well as planning a golf course there. These plans, however, were opposed to the interests of the social democratic Mayor of Ketzin, Karl Reumschüssel, who wanted to set up industrial companies in the place in order to create jobs. Among other things, he sponsored the construction of a large-scale garbage dump by WIMAG and BIMAG in the abandoned clay pits that were in the immediate vicinity of the Späthschen Villa. The landfill was an important employer for Reumschüssel, while Späth saw it primarily as an environmental burden that stood in the way of his plans.

In the Ketzin business, the focus was initially on the cultivation of fruit trees and the cultivation of fruit bases. During the Second World War the company switched to the production of potatoes and vegetables in order to feed the starving population. After the end of the war, the tree nursery was continued as a state-owned property and from 1950 was named VEG Volksbaumschule Ernst Thälmann . Later it was affiliated to the VEG Saatzucht Baumschulen Dresden and from 1978 the VEG Baumschule Markee. During the GDR era, in addition to fruit trees, mainly avenue trees and ornamental trees were grown in the tree nursery.

The tree nursery received increasing orders to design villa gardens and parks. At first the company worked with leading garden architects and was only responsible for executing the plans. In 1895 Franz Späth founded his own garden design department and commissioned Wilhelm Teetzmann (* 1866, † 1927), who had been with the Späth company since 1889, to set up and manage it. In 1912 Carl Kempkes (1881–1964), who had been employed as a garden architect at Späth from 1909, took over the management of the department. After Kempke's promotion to general director of the company, the garden architect Georg Gunder became head of the department.

Späth's department for garden design shaped the garden style of the time, especially between 1910 and 1930. A combination of a representative architectural and landscape garden was created, whereby the center of the facility is structured according to architectural criteria and merges into a more free design at the edge of the facility. Frequent design elements were white-painted pergolas and benches made of wood, climbing arches and trellises as well as hedges, borders and high rose trunks. Separate special gardens and terraces with limestone walls were created within the complex. For the planting of the gardens and parks planned by the garden design department, the new cultivations and introductions of the Späth tree nursery and perennial cultivations by Karl Foerster were often used. The very successful department designed numerous systems in the Berlin area, but also throughout Germany, Austria, Hungary, Czechoslovakia, Poland and Estonia.

Many young garden architects attached great importance to working in the department from which numerous well-known and renowned garden designers emerged.

Plant breeding and market launches by the Späth tree nursery

Numerous new varieties of ornamental and useful plants were created in the Späth tree nursery. In order to expand the range, Franz Späth also financed various expeditions, mainly to the Balkans, Transcaucasia, California and Colorado, where plants were collected and then grown in the tree nursery. Among other things, Carl Albert Purpus collected trees in North America for Späth. 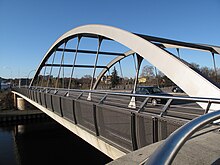 The New Späthbrücke on the Teltow Canal in Berlin

Numerous well-known gardeners completed their gardening training at the Späth tree nursery or worked here as gardeners or landscape architects: