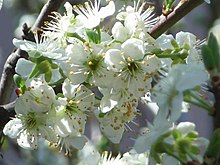 The plum tree reaches heights of up to 6 meters, rarely up to 10 meters. Annual branches are more or less bare. Older branches are covered in most varieties with up to about 5 centimeters long, strong thorns. The simple foliage leaves are notched to serrated, mostly bare on the upper and lower sides and only rarely scattered with hair; they are not very well developed at the time of flowering.

The hermaphroditic flowers are 1.5 to 2 centimeters in diameter and are radially symmetrical and five-fold with a double flower envelope . The five sepals are elongated and hairy scattered on both sides. The five greenish-white to yellowish-green petals are elongated. 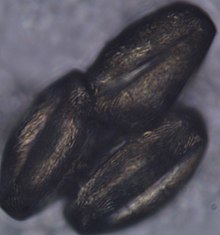 The stone fruit is at maturity blue to blue-black, frosted, 4 to 8 centimeters long, elongated egg-shaped and tapers towards the two ends thereof significantly. The stone core is egg to crescent-shaped, flattened, pointed at both ends and almost piercing. It is 0.47 to 0.58 times as thick as it is long. Its surface is bumpy and reticulate. On the belly side, it is particularly strongly drawn towards the end of the handle. The dorsal furrow is narrow and has oblique ridges. The flesh is moderately juicy, firm and easily detaches from the core and retains its shape when the oven is hot.

The number of chromosomes is 2n = 6x = 48, with a basic chromosome number of x = 8. It is therefore a hexaploid species.

In addition to being eaten fresh, plums are also used to make plum jam ( Powidl ), cakes ( plum cake ), ice cream , dried fruit (prunes; plum crampus is traditionally made from this, with other fruits and nuts and iron wire ), vinegar plums or fruit brandy ( plum liquor ).

In the Tyrolean Oberland , the plum has been cultivated for centuries at altitudes around 1000 meters ( legend has it that the first Reiser were brought there by Petrus Canisius in the 16th century ). The Stanzer Zwetschke is registered in the register of traditional foods of the Austrian Ministry of Life and is the leading product for the region in the gourmet region Austria .

In contrast to other plums, the stone easily detaches from the pulp of ripe plums, especially if you roll them across the stone with medium pressure, as with similar fruit. Unlike other plums, it is not acid-boiling.

The wood of the plum tree has a density of 0.75 to 0.85 g / cm³ and is popular with carpenters for high-quality furniture because of its reddish-brown color and hardness .

Selection from over a hundred plum varieties grown in Central Europe :