Border troops of the GDR

Emblem for vehicles of the border troops 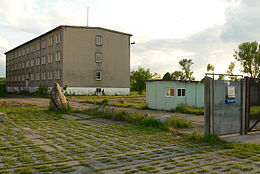 The border troops of the GDR were a military formation subordinate to the Ministry of National Defense (MfNV) to secure and monitor the state border of the GDR . They were part of the armed organs of the GDR .

History of the border troops

The predecessor organization of the border troops of the GDR was set up on December 1, 1946, initially as a paramilitary police unit to monitor the external borders of the Soviet occupation zone (from 1949 the GDR) under the designation Grenzpolizei, from May 1952 under the designation Deutsche Grenzpolizei , based on requirements of the allied victorious powers . December 1st as the founding date was later celebrated in the GDR as border troop day. The border police / German border police were subordinate to the Ministry of the Interior of the GDR, from May 1952 to June 1953 to the Ministry of State Security (MfS). After the wall was built, the German border police were placed under the Ministry of National Defense on September 15, 1961 and the border command was established. The parts of the German border police that were involved in the identity checks at the border crossings were subordinated as passport control units to Main Department VI of the MfS. With the introduction of compulsory military service in the GDR from April 1962, conscripts were also drafted into the border troops of the GDR as part of general conscription . In October 1962, military border regiments were formed. In the spring of 1971 the border troops of the GDR were outsourced from the National People's Army ( NVA ) due to the ongoing disarmament negotiations , in order not to be counted among the country's troop strength. Nevertheless, the border troops remained directly subordinate to the Ministry of National Defense as an independent armed forces . They formed part of the armed organs of the GDR . Just like the border security forces of the other Eastern Bloc states (e.g. the Czechoslovakian Pohraniční stráž / PS ), they were based on the model of the border troops of the USSR , even if their organizational subordination differed from the Soviet model.

In 1952, the GDR border troops took over the Stintenburg mansion as a training location under the covert direction of the GDR State Security Service . Since the beginning of the seventies, the Stintenburg served as the central school for border patrols. The secrecy about this training facility was so great that the residents of the surrounding villages did not know anything about the significant influence of the Stasi until the end of the GDR. In every border company along the inner-German border in Stintenburg there were border scouts trained as professional NCOs. They had special equipment in the form of double armament with a submachine gun and a pistol, a service dog, a motorcycle, a small rake to cover up tracks; Sometimes they also brought special photo technology with them. In addition to these monitoring and control tasks, they were also responsible for maintaining contact with so-called civilian “border guards”. These were "border activists" made up of locals who had to be just as vigilant as the uniformed men at the border themselves and were supposed to report any suspicious movement or change of location. These border patrols also roamed the border towns more often. Unlike the usual border guards made up of conscripts, you were traveling alone. Between the 1980s and the time of the fall of the Berlin Wall and the peaceful revolution in 1989, the border troops of the GDR comprised an average of 44,000 people under arms.

The GDR government cultivated a good deal of distrust even towards the guards it had deployed. Particularly in relation to team ranks, precautions were taken to prevent escape plans as far as possible. Assigned to border security, they never knew, until shortly before starting work, who was to be posted with whom or to go on patrol. Under no circumstances should friendships be formed that could have resulted in escapes. Also, nobody knew whether the person on duty with him was not a Stasi spy, with the task of uncovering such projects at an early stage. The officers, whose loyalty the SED regime bought through various perks and privileges, was more reliable.

The vast majority of the troops served to guard the inner German border with the Federal Republic of Germany and the Berlin Wall , which surrounded Berlin (West) . To this day, it is still a matter of dispute how many people died trying to cross the border. The working group August 13th names 1200 deaths, the Berlin public prosecutor's office can prove 125 deaths, another 85 are investigated.

Relatively few forces controlled the Oder-Neisse border to Poland and the border to the ČSSR . The 6th Coastal Border Brigade to secure the sea border on the Baltic Sea , which organizationally belonged to the People's Navy , had a special position .

The controls at the inner-German border were officially discontinued on July 1, 1990 and the border troops were subordinated to the GDR Interior Minister for operational issues relating to control of the borders with the Czech Republic, Poland, the sea borders and the airports. The border troops were disbanded by “Order No. 49/90 of the Minister for Disarmament and Defense on the dissolution of the GDR's border troops” on September 30, 1990, and the remaining 15,000 members were released. Some of the staff was previously transferred to the GDR's border guard and from there to the Federal Border Guard (BGS) (now the Federal Police ). Around 4,500 border troops were hired by the Bundeswehr as civilian forces in recultivation commands to dismantle the inner-German border barriers. Incidentally, the border troops of the GDR and their military predecessor units had recorded a high number of complete desertions in the previous decades - in the direction of West Germany and West Berlin. 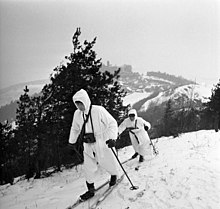 Operational exercise in the Mühlhausen district on March 27, 1982

The headquarters of the command of the border troops was from 1961 to 1990 in Pätz, southeast of Berlin. They were subordinate to him

The border command of the NVA was structured as follows from 1961 to 1971:

Six border brigades along the border with the Federal Republic

on the border with the People's Republic of Poland

on the border with the ČSSR

along the Baltic coast

In 1971 a reorganization took place with the introduction of three border commands:

Flag of the Coast Border Brigade

Each border command was divided into several border regiments and one or two border training regiments. Only around 600 border guards were on duty at the borders with the “ socialist brother states ”.

The 6th Coastal Border Brigade (6th GBK) was responsible for monitoring the sea border and preventing attempts to escape across the Baltic Sea. Organizationally and operationally it was subordinate to the command of the People's Navy .

Another structural change began in early 1989:

Border training centers in Halberstadt and Plauen , which were directly subordinate to the border command, were supposed to replace the previous border training regiments. The realization of the new border system was no longer completed due to the political upheavals.

Border Troops and the Ministry of State Security

The technical operation of the GÜSt was carried out by small special units of the border troops, such as cleaning, garbage disposal, (electricity) emergency power systems, lighting, barriers and traffic lights.

Another MfS service unit, completely legendary as a GT unit, was the radio reconnaissance of the border troops, which mainly eavesdropped on the western border area (radio traffic from NATO units and the Federal Border Guard ). These employees were stationed at the three border commandos coast, north and south and belonged entirely to main department III (radio reconnaissance). They were managed by the MfS district administrations (North, for example, by BV Magdeburg ), which also regularly picked up the tapes with recordings of the intercepted radio traffic from the GT commands.

Overall, the border troops were monitored by Main Department I of the MfS, visible as Administration 2000 or Office 2000 at the GT locations and covered with officers in special operations (OibE) in key positions and unofficial employees (IM). The border troops had the highest penetration with IM of all GDR institutions (ratio of almost one to five).

With the medal for exemplary border service , the MfNV, represented by the deputy minister for national defense and chief of the border troops of the GDR, honored border soldiers for exemplary security of the state border. A lower award was the "Achievement Badge of the Border Troops". The "Best Badge " was awarded for exemplary service and outstanding political and sporting achievements .

Chief of the border troops

(including predecessor in the German border police)

Since the wall was built on August 13, 1961, at least 756 people have died trying to cross the border illegally. 271 of them were killed on the inner-German border. There were 239 deaths on the Berlin Wall itself. 174 died on the maritime border on the Baltic Sea and 41 GDR citizens died on the border between the Federal Republic of Germany and the Eastern Bloc countries. Among the dead were 5 deserters from the GSSD and 16 members of the border troops. After the fall of the Wall, members of the border troops were sentenced to long prison terms in the wall rifle trials (because of the fatal shots at the Berlin Wall and the inner German border and because of the order to shoot ). Among them was the former head of the group, Klaus-Dieter Baumgarten .

Commons : Border troops of the GDR  - collection of pictures

Branch forces of the National People's Army of the GDR