Service dog handler with service dog at the police

A police-like activity of a service dog was first known at the beginning of the 12th century when city guards used a dog in the French port city of Saint-Malo at night. Police dogs also became known in England in 1816 for tracking down whiskey smugglers. In 1896 the city of Hildesheim hired Great Danes for night watchman services , which the cities of Schwelm and Braunschweig joined.

Service dogs were not used in Germany until 1900, when gendarmes took their dogs with them on patrol. The first use is said to have taken place on October 1, 1901. The police reformer Franz Friedrich Laufer also promoted the introduction at the beginning of the 20th century.

When a great dane in the police service kept people away from the danger spot in a major fire around 1902, the police service dog was born. When a police dog tracked down a murderer in Braunschweig in 1904, dogs were not only used for protection, but also to compare scents in police investigations. Service dogs were also used in concentration camps during the National Socialist era .

Special training for police dogs was introduced in the 1970s. In 1972 there were the first drug detection dogs in Hamburg. In 1976, explosives detection dogs were added in Hamburg and Rhineland-Palatinate. Much later, money tracking dogs were trained.

Service dogs are equipped with additional equipment. In the case of tracking dogs and mantrailers, this includes the long tow leash with which the dog handler can lead on the long leash, tracking transmitters for the dog so that it can be located outside of the visual range, and bulletproof vests for guard dogs.

Use of dogs by the police 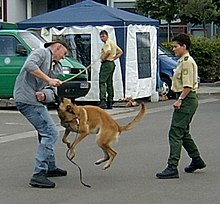 Service dogs and handlers on patrol in Singapore

As operational resources of the police service dog formally a means of physical violence (see. Direct force ). For the legal situation in Austria, the Arms Use Act §10 Service Dogs is decisive. Service dogs are used by police forces practically all over the world. Dogs of the recognized service dog breeds are mainly used as service dogs. "The service dog breeds were once defined by the working group of the service dog-keeping authorities in Germany." In Germany these are:

In principle, however, other breeds or mixed breeds can also be used as service dogs. As sniffer dogs z. B. different breeds of hunting dogs ( retriever , spaniels , terriers ) are used.

Police dogs are trained and used for various tasks:

Use of dogs at customs

Just like the police, the customs administration uses service dogs as protection dogs and detection dogs in the entire range of tasks to detect drugs , weapons , explosives , cash , tobacco , products of animal origin (ETU) and other illegal substances or goods with restrictions at airports, EU external borders, to be found in private homes, on motorways and at the border (see smuggling ). In addition to actively referring dogs (scratching), passive dogs are also trained who can find a find in silence and without any indications that an outsider can recognize, e.g. B. at the customs control , show (see passive dog ).

The use of guard dogs at customs takes place in the border inspection service as well as in the traffic routes control units (formerly mobile control groups).

Service dogs of the German customs are led by customs dog handlers and trained nationwide in the customs dog schools in Bleckede and Neuendettelsau .

Use of dogs in prison

Use of dogs by other authorities

In some countries, sniffer dogs are used to monitor compliance with quarantine regulations when transporting agricultural products. In Australia and New Zealand, these dogs are assigned to the respective Ministry of Agriculture, in the US they are now of the Department of Homeland Security belonging U.S. Customs and Border Protection . Such dogs are also used in Canada, where they are in the service of the Canada Border Services Agency , which performs both customs and food control tasks.

Use of dogs in the military 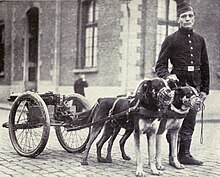 Dogs were used for military purposes well before the 20th century. Dogs were reintroduced to France in 1908 by Lieutenant Jupine. Germany , Russia and Italy quickly followed. The British Army used Collies, or Scottish Sheepdogs, in the Transvaal War . In the maneuvers from 1911 to 1913 in Belgium good experiences were made with these dogs. War dogs in the First World War were used, among other things, as reporting, medical and load carriers. A common form of organization for the deployment is the military dog squadron . In the High Vosges, France used sled dogs to take care of the mountain troops and hunters.

Use of dogs in the German Bundeswehr 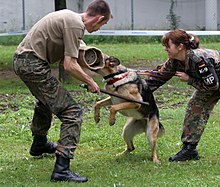 Two police officers with a guard dog at a public demonstration.

Each of the eight military police battalions of the Bundeswehr has at least one company in which these service dogs, six drug detection dogs and six explosives detection dogs, are organized. The suitability to be a Schutzhund is only considered secondary, since the main focus of the training was placed on the dogs' detection abilities. German and Belgian shepherds are mainly used in the Bundeswehr. When searching for mines, the pioneers mainly rely on the Labrador Retriever because of its calm, balanced nature .

Use of dogs in the Austrian army

In Austria, military dogs and their handlers are trained in the Kaisersteinbruch military dog center . There are around 250 dogs in the armed forces at home and abroad (as of 2006). The Rottweiler is the defining breed.

The basic training of a police dog takes about 70 days. He is taught how to find evidence, track and detain people, and do some obedience exercises. He also learns to protect his handler. After completing its basic training and then once a year, the dog is tested according to the ordinance of the test regulation. Only when the dog handler has achieved at least a sufficient grade with his dog, the dog can be accepted into the public service. After the exam, his field of work is very diverse. He has to protect his dog handler from attacks, confronts fleeing perpetrators or looks for missing children or other helpless people. For further training as a police sniffer dog, a pronounced play and prey behavior and safe environmental behavior are required. During play, the dog is taught how his "toy" smells. For this purpose z. B. filled a plastic tube with a substance that smells like hashish . Little by little, the dog recognizes the toy by its smell and is actually looking for its toy. If he has found his supposed toy, he shows this either by an active display (scratching) or a passive display (sitting or lying, fixing the place of discovery with his eyes). As a reward, the dog now gets his toy and he can play with it. Later on, the toys' smells become more complex and can be combined.

For a long time now, the authorities have refrained from training under duress , because playful training and the targeted promotion of desirable behavior achieve better results than an act that is unpleasant for the dog.

The use of service dogs against people is regulated in Section 10 of the Weapons Use Act 1969 and is subject to the provisions on the use of weapons. The general conditions for their training are laid down in the Service Dog Training Ordinance.

In Article 69 of the Animal Welfare Ordinance, dogs are classified according to their intended use. Service dogs (along with others such as rescue and handicapped dogs) belong to the class of working dogs. "Service dogs are dogs that are used in the army, the border guards or the police or are intended for it."