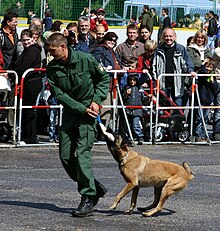 Belgian shepherd as a police dog

As a Belgian shepherd four types which arose in the 19th century in Belgium breed are called. The breed is listed by the FCI with the standard number 15 in Group 1, Section 1 .

Before the end of the 19th century, Belgian shepherds were known exclusively as working dogs by shepherds and farmers and were not a separate breed.

The Club du Chien de Berger Belge was founded on September 29, 1891 in Brussels by A. Reul. On May 8, 1892, the first special breed show for Belgian Shepherds took place in Cureghem. The first standard was also drawn up in the same year . Three varieties were described: long hair, wire hair and shorthair. This standard has been changed several times up to the current standard with four varieties. In 1898, L. Huyghebaert and G. Geudens founded another club, the Berger Belge Club , based in Malines (Mechelen). Only the most recently founded club survived the various disputes over color, coat and other important characteristics of the breed. This was recognized by the Société Royale Canine St. Hubert (Belgian umbrella organization). A few years later, the Royal Groendendael Club was recognized. On March 30, 1990, these two clubs finally merged to form the Royal Union of Clubs for Belgian Shepherds.

In 1901 the first Belgian Shepherds were entered in the stud book. The first officially registered dog of the breed was the Malinois Vos de Polders.

The Belgian Shepherd Dog is bred in 4 varieties :

The same type of dog can be found in the neighboring country, the Netherlands: the Hollandse Herdershond . Physique and appearance are virtually identical. The Belgian Shepherds, unlike the Dutch Herderhond, have given their varieties different names. Brindle dogs are also bred with the Dutch Shepherd . Belgian and Dutch shepherds come from roughly the same area. The separation of the races did not occur until Belgium separated from the Netherlands and became independent.

The Belgian Shepherd Dog is lightly boned and has an elegant overall appearance. Because he carries his head quite high (an angle of almost 90 degrees from neck to back line compared to about 45 degrees for today's German Shepherd ), this dog looks very noble and proud without exaggeration. His head should be dry (close-fitting skin) and not rough. In contrast to the German Shepherd Dog, which when viewed from the side is rectangular, i.e. H. longer than is high, the Belgian Shepherd Dog is ideally built square and not very angled. Its shoulder is steeply sloping and the hindquarters are very slightly angled; i.e., it is more likely to be under the body. This makes the gait of the Belgian Shepherd Dog less "expansive". The steep angulation of the hind quarters also explains the speed and agility as well as the outstanding jumping ability of this dog and shows the usefulness of its " building ", i.e. its physique, for the intended purposes. The best way to see these differences to today's German Shepherd Dog is the Malinois.

Different susceptibilities to hereditary diseases are described in the literature for the different variants of the Belgian Shepherd Dog :

Although they all form a common breed , the varieties must not be crossed with one another . In special cases, the national breeding associations can grant exceptions.

The breed standard contains the following rules for dog shows :

"The four varieties are judged separately and each is entitled to obtain a CAC, a CACIB or the corresponding reserve awards."

All four varieties of the Belgian shepherd standing in the Swiss cantons of Glarus and Ticino on the race list of potentially dangerous dogs; in these cantons, keeping is subject to approval.