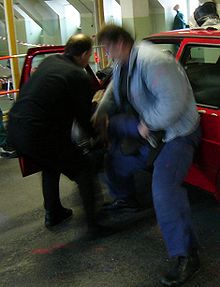 Use of physical violence against people: Removal of a person from a vehicle using direct force (exercise unit in the context of police behavior )

Immediate coercion (UZ) is a legal term that encompasses the sovereign action on people or property by means of physical violence , physical violence aids or weapons by competent and authorized public officials and is an essential component and expression of state authority .

In principle, the principle of proportionality applies. This means that the police are generally only allowed to use force as an exception and only if they cannot enforce a police measure in any other way. Neck and vertebrae are taboo. Police officers learn that in operational training. The risk of vertebral injuries is too great. There is also a rapid risk of suffocation. The so-called prone restraint is prohibited in this country by ministerial orders. The fact that an officer kneels on the back of someone who is tied up creates the problem that the lungs are compressed. Even "standing after" is not allowed and is punishable as bodily harm in office .

Immediate coercion is a means of coercion without suspensive effect . Among other things, the principle of proportionality must be observed when applying .

Physical violence is any direct physical influence of a public official on people or things.

Weapons are officially approved batons (incorrectly referred to in many laws as a cutting weapon ) and firearms , irritants and explosives . Hand grenades are legally possible as a weapon in the Federal Police , in Hesse and in Bavaria.

Explosives are usually not classified as weapons, but as auxiliary equipment. Explosives are used, for example, to open doors; Hand grenades and other explosive objects, on the other hand, are weapons.

The reason for the application of direct coercion can be criminal ( repressive ) or danger-averting ( preventive ) - in each case sovereign - action. Immediate coercion is usually a measure to enforce an informal measure, hence a follow-up measure. Immediate coercion represents an interference with the fundamental rights of physical integrity and, if necessary, with the freedom of the person or the right to property .

Immediate coercion must be threatened in advance, legally effective, if the circumstances permit. This can be done by speaking or making clear gestures (in the case of communication difficulties) or by firing a warning shot (the latter only when firearms are used ).

Officials authorized to exercise this position (enforcement officers) in Germany

Members of the armed forces

Legal basis: Act on the application of direct coercion and the exercise of special powers by soldiers of the Bundeswehr and allied armed forces as well as civil security guards

Legal basis: Code of the penal system in Baden-Württemberg

Legal basis: Law on the Powers of the Judicial Sergeant Service

Legal basis: Law on the tasks and powers of the Bavarian State Police (PAG)

Legal basis: Law on the use of direct coercion when exercising official authority by law enforcement officers of the State of Berlin (UZwG Bln)

Legal basis: Law for the Protection of Public Safety and Order (SOG; published in HmbGVBl. 1966, p. 77)

According to § 107 SOG MV, only the following are authorized to use firearms:

Legal basis: Section 65 (4) of the State Administrative Enforcement Act and Section 57 (3) of the Police and Regulatory Authorities Act (RPf POG) in conjunction with Section 205 of the State Officials Act

Legal basis: Law on Public Safety and Order of the State of Saxony-Anhalt

Firearms are only allowed to be used by specially authorized officers. Are authorized (§ 256 LVwG)

You can be granted compulsory powers according to Sections 50 to 53 of the Thuringian Administrative Delivery and Enforcement Act - excluding the use of weapons.

The police force is one of the most important parts of state authority . In the modern police , the state power materialized because the state power alone the right close physical violence against its subjects has.

Since the Basic Law came into force, effective legal protection has to be granted against any form of state action (cf. Art. 19 IV GG). The Prussian Higher Administrative Court still assumed that the exercise of direct coercion was an implied toleration order (i.e. an administrative act ) against the citizen. Immediate coercion could therefore be attacked with the legal remedies that are permitted against administrative acts. For this construction, which was based on the fact that the Prussian administrative procedural law only granted legal protection against dispositions, according to the prevailing opinion today there is no longer any need. According to this, the general declaratory action is the correct type of action for actions that are only directed against enforcement .

Wikibooks: Rights and Duties in Dealing with the Police in Immediate Coercion  - Learning and Teaching Materials