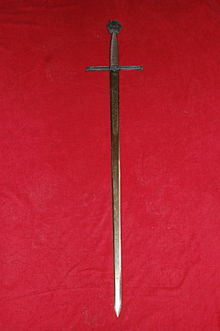 A cut weapon is a blade weapon that is mainly designed to use the power of the blow with a cutting edge. The effect of the blade through the cut is splitting, so that we are talking about penetration . Cutting weapons are classed as edged weapons , as they are wielded with the muscle power of the owner.

It does not work by piercing with the point, but by the sharpness of the blade . The transitions between the cutting and stabbing weapons as well as the striking weapons are often fluid, since for example a rapier , a saber or a sword can be used for both cutting and stabbing. A halberd and many other weapons even combine the various functions in that they are composed of several blades with different effects. Even a typical striking weapon like the mace can be provided with blades and thus used as a cutting weapon.

Examples of cutting weapons are:

The use of cutting weapons often goes hand in hand with a corresponding fencing technique , bat fencing .