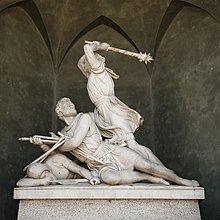 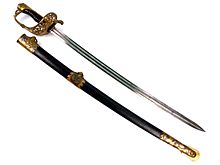 Saber from the American Civil War 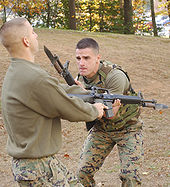 An edged weapon , also a naked weapon , is a hand weapon that develops its effect through the direct use of muscle power.

Edged weapons are a subset of defensive weapons, i.e. weapons designed to harm the enemy (in contrast to protective weapons such as the shield ).

In further definitions, long-range weapons are also counted among the edged weapons , in which stored muscle power supplies the energy. These include the bow and arrow and the crossbow .

Edged weapons are of secondary importance in the military, with the exception of special forces, since modern military close combat is decided with firearms. Edged weapons were used for direct combat with the enemy when soldiers were still equipped in bulk with single-shot carbines or when ammunition was only available to a limited extent due to insufficient supplies.