Kalbe (Milde) (until 1952 Calbe an der Milde ) is a town and a state-approved resort in the Altmark district of Salzwedel in Saxony-Anhalt .

Kalbe (Milde) is centrally located in the Altmark on the Milde River about six kilometers east of the federal highway 71 .

The city is divided into 16 localities (former municipalities). They include the same name and other districts with living spaces.

Already at the end of the last Ice Age , Late Paleolithic and Mesolithic hunters and gatherers left numerous artefacts made of stone, bones and antlers in the Kalbe bog.

Kalbe was first mentioned in a document in 983. In the chronicle of the bishop and historian Thietmar von Merseburg , the place was mentioned when describing the destruction of the Laurentius monastery by rebellious Slavs.

Kalbe belonged to the district of Salzwedel until 1952 , but became a district town in the newly founded district of Magdeburg as part of the administrative reform in the GDR . To distinguish it from Calbe (Saale) , Kalbe has been spelled with a "K" since then. The Kalbe district was dissolved again at the end of 1987 and the town was assigned to the Gardelegen district.

On January 1, 2011, the municipalities of Badel, Jeggeleben and Zethlingen became districts of Kalbe (Milde). As a result, the urban area has increased almost nine-fold within two years.

Unified municipality of the city of Kalbe (Milde)

The local elections on May 26, 2019 resulted in the following composition of the city council in Kalbe:

Blazon : "Split of silver and gold, at the front of the gap a half red eagle with gold reinforcement, at the back a red calf bursting out of the edge of the shield."

The coat of arms goes back to a seal from the 17th century with the inscription SIGILLVM OPIDI CALBENSIS. It already showed half the Brandenburg eagle with a rose underneath, which was part of the coat of arms of the von Alvensleben family , the former owners of the castle, but the rose was later dropped. While the eagle indicates that the place belongs to Brandenburg, the calf is an allusion to the name of the city. 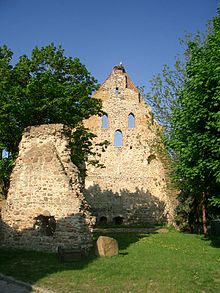 The Burg Kalbe , formerly Castle Calbe , was built in the 9th and 10th centuries. Its ruins still shape the eastern edge of the cityscape today. It was owned by the von Alvensleben family from 1324 to 1945 .

The Kalber watermill near the castle can be traced back to a mill in the Middle Ages . The complex, to which a now dilapidated mansion- style house belongs, was last used as a feed factory. It was shut down in 1991. The weir was renewed in 1999; a restoration of the watermill system is planned.

The house at Marktstrasse 9 after the renovation

The house at Marktstrasse 9 was built in 1775 and is the oldest commercial building in the city. After extensive renovation, it is now used by several companies and a hotel.

The Nicolaikirche was built around 1170 as a Romanesque basilica made of field stones at the highest point of the city, expanded around 1575 and rebuilt in 1755 in the Baroque style. It is named after Nikolaus von Myra and today belongs to the Kalbe-Kakerbeck parish in the parish of Salzwedel of the Evangelical Church in Central Germany . A description of the church's tombstones and epitaphs was published in 1868 by Adolf Matthias Hildebrandt.

The Catholic St. Peter Church is named after the apostle Simon Peter . The Kuratie Kalbe was founded in 1946 , initially under the patronage of St. Hedwig. In 1963, the parishioners did a great job of building the St. Petrus Church. The church is located on the east promenade and today belongs to the parish of St. Hildegard based in Gardelegen .

The New Apostolic congregation Kalbe / Milde existed until 2012, it belonged to the Stendal church district. Their church was in the northern area of ​​the east promenade.

The station Kalbe (Milde) was for decades the operation center of the approximately 127-kilometer route network of the Altmark railway AG and its predecessor companies (see also Altmärkische Kleinbahn AG ). In June 2001 the traffic on the Hohenwulsch – Kalbe connection was stopped as the last route .

Kalbe has been involved in the new public transport concept of the Altmarkkreis Salzwedel since around 2008. This consists of the state bus 100 (Salzwedel – Kalbe – Gardelegen – Magdeburg) and the bus line 500 (Kalbe – Brunau – Salzwedel). The small villages are mostly served by on- call buses , the timetables of which are tailored to the bus routes. The basic frequency is every two hours on weekdays, on weekends there are gaps in the timetable, especially in the mornings.

On an area of ​​263 hectares northeast of Calbe an der Milde, the Navy operated the Goliath long-wave transmitter from 1943 to 1945 to transmit commands to submerged submarines . The antenna of this transmitter, which with a transmission power of 1000 kilowatts was probably the most powerful transmitter in the world at the time, consisted of a shield antenna that was suspended from 15 guyed, earthed lattice masts 170 meters in height and on three tubular masts 204 meters in height, insulated from earth was. After 1945, the facility initially served as a prisoner of war camp before being dismantled in 1946. The foundation of mast number 8 is still preserved. After dismantling, the long-wave transmitter was the first transmitter of its kind to be rebuilt in the Soviet Union near Nizhny Novgorod in the Druzhny settlement. It is still in operation today.

Cities and municipalities in the Altmarkkreis Salzwedel