Grevesmühlen (also colloquially: Kreihnsdorp or Grevsmöhlen ) is a town in the district of Northwest Mecklenburg in the state of Mecklenburg-Western Pomerania . It is one of the 18 medium-sized centers in the state and part of the Hamburg metropolitan region . Grevesmühlen is the seat of the administrative community that forms the city of Grevesmühlen with the Grevesmühlen-Land office .

About 15 kilometers north of the city is the Baltic Sea , about 40 kilometers to the west is Lübeck, and 20 kilometers to the east is the Hanseatic city of Wismar . The urban area closes to the north with the Steinbrink forest area and the Santower See , to the west with the Grenzhausen and Börzower Wald districts, to the south with the hills of the Upahler Lehmberge and the Stepenitz , and to the east with the districts of Barendorf and Hoikendorf. The city and districts are surrounded by various forest areas as well as agricultural areas and are located in typical Mecklenburg hills and lakes. The Vielbecker See and the Ploggensee are in the immediate vicinity of the historic city center. The Santower See, the Everstorfer Forest and the Kalkflachmoor near Degtow are nature reserves.

The following districts belong to Grevesmühlen: 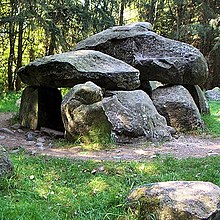 The original name of the town from 1226/1230 Gnewesmulne (Mill of Gnev) changed in 1237 to Gnewismulne , 1272 to Gnewesmolen and 1362 to Greuesmolen (n becomes r). The old Polish syllable Gnĕv could possibly be translated as “anger”. This syllable was supplemented by the Middle Low German syllable Molne for mill . Until the time before the First World War, the name Grevismühlen was also in use. The place is also often written in this way in Grevesmühlen church registers and the seal of the Nikolaikirche.

In today's district of Barendorf there are seven megalithic systems , including the passage grave of Jamel ; otherwise mostly restored ancient dolmen .

Grevesmühlen is one of the oldest cities in Mecklenburg. Gnevesmulne was first mentioned in 1226 and in 1262 as an oppidum (city). The village was already established during the Slavic settlement period. German colonists expanded the Slavic village into a city. The church was mentioned in 1230 in the Ratzeburg tithe register in the diocese of Ratzeburg . In addition to the castle on the market square mentioned in 1279 and the castle mentioned for the first time in 1345, which was not rebuilt after the great fire on June 15, 1659, which destroyed almost the entire city, the city had the right to mint coins from 1525 to 1567. Grevesmühlen was a country town represented in Mecklenburg and until 1918 as part of the cities of the Mecklenburg District on state parliaments.

The city fires of 1725 and 1756 and the Seven Years' War did not allow the city to expand until around 1800. A brick factory was built in 1850, the malt factory in 1878 (since its renovation in 2004 a location of the district administration ), a dairy in 1890 and a sawmill in 1898. In 1877, the Jews living in the city laid a cemetery on Vielbecker Weg, which was no longer used in the 1930s, after the textile merchant Max Salomon was the last Jewish family to emigrate.

On July 1, 1950, the previously independent communities Questin and Santow were incorporated. The Ploggenseering housing estate with around 600 apartments was built between 1965 and 1975. In the 1970s, the entire city center was to be replaced by new buildings. After the political change, the historic city center with its town hall was fundamentally renovated from 1991 as part of urban development funding. 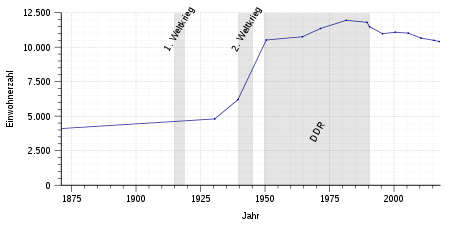 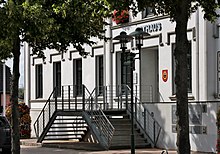 The elections for the city council on May 26, 2019 led to the following result:

The CDU and FDP have formed a joint parliamentary group with 9 members.

Prahler was elected in the mayoral election on September 18, 2016 with 50.4 percent of the valid votes for a term of eight years.

Flag of the city of Grevesmühlen

The flag was designed by the Schwerin heraldist Karl-Heinz Steinbruch and approved by the Ministry of the Interior on June 5, 2014.

There has been a twinning with the city of Ahrensbök in Schleswig-Holstein since 1992 and with the Swedish municipality of Laxå since 2004 . In 2014 a partner agreement was signed with the Hungarian city of Nagymaros .

Memorial for 407 dead in the sinking of the Cap Arcona

Every year in mid-June the Grevesmühlen city festival takes place with the largest regular street parade in Mecklenburg-Western Pomerania, with a stage program and u. a. a city run and a sports afternoon. The city festival is mostly organized on a voluntary basis.

Every year in June the so-called Aluman is organized by those interested in sports, a triathlon for adults and children.

The Pirate Open Air has been held every year from the end of June to the beginning of September since 2005 . The event has so far been attended by around 60,000 spectators.

Every evening before Reformation Day there is the Grevesmühlen Culture Night with stage programs, a satirical play, light installations and readings at various locations. Music nights are organized twice a year.

The Kreihnsdkörper Advent market takes place on the 1st weekend in Advent. The event is organized jointly by the parishes of the city and the Grevesmühlen trade association.

In April 2019 the unemployment rate was 4.5% - the lowest in Mecklenburg-Western Pomerania.

The city is characterized by small businesses. Craft businesses, building trades, retail trade, services and administrative services make up the bulk of the added value. In terms of tourism, retailers and restaurants benefit from the proximity of the Baltic Sea and the Piraten Openair. The largest local employers are the district administration, the hospital, a cleaning company, a disposal company and care facilities.

In 2019, the city was selected by the Federal Ministry of the Interior, for Building and Home Affairs as one of 13 Smart Cities model projects.

Grevesmühlen is on the B 105 federal road between Dassow and Wismar and on the L 03 state road between Boltenhagen and Schwerin . The closest motorway junction is Grevesmühlen on the A 20 ( Lübeck - Rostock ).

Grevesmühlen station after the modernization in 2017

Grevesmühlen station is on the Lübeck – Bad Kleinen railway line and is served every hour by the RE 4 regional express line ( Lübeck - Szczecin ). The Grevesmühlen – Klütz railway line began in Grevesmühlen, and passenger traffic was discontinued in 1995. From 1997 to 2005 there was tourist traffic with historic locomotives and railcars on the route.

Regular bus connections exist primarily to Lübeck (via Dassow), Wismar , the state capital Schwerin and the Baltic seaside resort Boltenhagen . In addition, all connections to the surrounding area from the bus station are operated by the local transport company "Nahbus". The city ​​bus in Grevesmühlen runs during the day in regular service and as a dial- a- bus on individual order between 71 stops.

Grevesmühlen has the following schools:

Grevesmühlen was the seat of a local court . This was converted into a branch of the Wismar District Court in July 2015 .

The association Stadt ohne WATT has been campaigning for energy transition projects since 2003 . Supported by the city, the municipal utilities, the special purpose association and housing association as well as numerous association members, numerous individual projects have been implemented since then. All private households are supplied with electricity from renewable energy sources. District heating supplies around half of households and almost all public properties. The Grevesmühlen sewage treatment plant is the first energy + sewage treatment plant in Germany (2001).

In the novel, anniversaries of Uwe Johnson , the city hides behind the name Gneetz (apparently as a contrast to the neighboring town of Klutz , which stands in the center of the novel, but when Jerichow is named).