Groß Stieten lies between the Hanseatic city of Wismar and the north shore of Lake Schwerin . The area is slightly hilly, it forms part of the North Sea-Baltic Sea divide .

Groß Stieten was shaped by the estate with its manor house and farm buildings as well as the farmer's cottages. In earlier times the place was probably owned by the Knights of Rambow, who were widespread in the southern area of ​​Wismar. The von Hagen and von Zülow families followed until the 17th century . It is likely that Groß Stieten was in one hand for a long time with the villages of Neu Stieten and Grapen-Stieten.

After 1945 this was the national estate. An agricultural school was established in the 1950s, some of which still exist today. The place became the most important training center for agricultural professions in the district of Wismar. 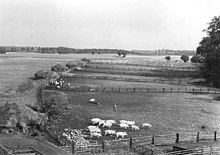 In 1952/53 a people's own estate (VEG) was founded in the village , which did not have any agricultural land, but worked as an animal breeding and rearing company. Under the management of Erich Tack and afterwards, the village experienced its greatest boom, the number of inhabitants rose to almost 1,500 by the 1980s. The VEG also ran the Mecklenburg Mühle restaurant .
Several farms were established in and around Groß Stieten, including the Losten sow rearing facility (SAZA, Tierzucht Gut Losten GmbH) from 1972 and a poultry breeding facility. Both companies still exist (2015).

In 1990 the lack of land ownership became a problem. The VEG as a state enterprise was dissolved, but there were hardly any fixed structures outside of this enterprise. The village lost 60% of its population and was able to increase its population by 11% by 2007.

Neu Stieten used to belong to the goods of Groß Stieten. From 1871 to 1945 the estate was owned by the Thormann family.

The municipality has no officially approved national emblem, neither a coat of arms nor a flag. The official seal is the small state seal with the coat of arms of the state of Mecklenburg. It shows a looking bull's head with a torn neck fur and a crown and the inscription "GEMEINDE GROß STIETEN • LANDKREIS NORDWESTMECKLENBURG".

Due to its proximity to the Baltic Sea and good transport links, the community has become a location for the settlement of craft businesses, but also an attractive place to live for townspeople from nearby Wismar. In addition to a few small companies such as carpenters, metal construction companies and an event company, there is a horse breeding company, a laying hen company and private cattle breeding and arable farming operations in Groß Stieten.

Groß Stieten is on federal highway 106 between the port city of Wismar and the state capital Schwerin ; The federal motorway 20 passes seven kilometers north of the municipality . The next larger train stations are in Wismar and in the neighboring municipality of Bad Kleinen .