This article deals with the Mecklenburg community of Jesendorf. A district of the municipality of Kröning in Lower Bavaria also bears the name Jesendorf, see Jesendorf (Kröning) .

Jesendorf is a municipality in the east of the district of Northwest Mecklenburg in Mecklenburg-Western Pomerania . The community is administered by the Neukloster-Warin Office , based in the city of Neukloster .

The municipality of Jesendorf belongs to the extreme northwest of the Mecklenburg Lake District . The community, surrounded by numerous small lakes, is approx. 13 kilometers from the Hanseatic city of Wismar .

The community consists of the districts:

Jesendorf : The ancient fire place in Jesendorf is the largest in Germany. It was discovered in 2008 east of the Tarzower See during a rescue excavation. Jesendorf was first mentioned in a document in 1235. The church in Jesendorf dates from 1338. The Jesendorf settlers' houses have existed since the 1930s, they were built in the course of settlement after the Jesendorf estate was dissolved. Trams, Neperstorf and Büschow were originally estate villages (until 1945).

The official seal shows the municipal coat of arms with the inscription "GEMEINDE JESENDORF • LANDKREIS NORDWESTMECKLENBURG". 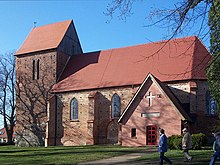 → See also the list of architectural monuments in Jesendorf

Some of the residents are commuters , some jobs are provided by local farms. Gravel mining is carried out in the area.

Jesendorf has a junction on the federal motorway 14 , which connects the A 20 with the A 24 ( Berlin - Hamburg ). The nearest train station is in the neighboring community of Ventschow ( Schwerin - Rostock railway line ).