Dorf Mecklenburg is a municipality in the district of Northwest Mecklenburg in Mecklenburg-Western Pomerania . It is the administrative seat of the Mecklenburg-Bad Kleinen village office , to which eight other communities belong. The place is part of the Hamburg metropolitan region .

The municipality of Dorf Mecklenburg lies between the Hanseatic city of Wismar and Lake Schwerin , one of the largest German lakes. In the slightly hilly terrain, the North Sea-Baltic Sea watershed is only about ten kilometers from the Baltic Sea ( Wismar Bay ). The Wallensteingraben runs past the community to the west , which connects the Schweriner See with the Baltic Sea as the only outflow and was created between 1577 and 1582 under Duke Ulrich .

The municipality of Dorf Mecklenburg consists of the following districts: 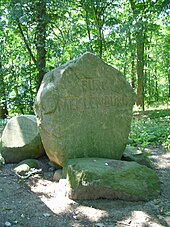 Monument on the site of the earlier Mecklenburg

Wall of the castle settlement

The Mecklenburg , the former castle of the municipality, is the namesake for the entire Mecklenburg landscape and for the state of Mecklenburg-Western Pomerania.

The castle of the Slavic Abodrites was referred to as Nakon's castle in a report by the Arab trader Ibrahim Ibn Jacub as early as 965 . As was found in an excavation from 1967 to 1969, it was made in the first half of the 7th century. In the course of time, Mikelenburg became Mecklenburg . King Otto III. first mentioned Mecklenburg on September 10, 995. However, it was demolished in 1256 after being destroyed several times. The material was used for the construction of the Fürstenhof Palace in the then flourishing city of Wismar at the southernmost point of the Baltic Sea. After the castle was rebuilt for the Schwerin princes in 1277 , it was destroyed again 45 years later and finally. The village of Mecklenburg emerged from the settlement of the outer bailey in the middle of the 14th century. The current street "Am Burgwall" leads to the still visible ring wall, which has been used as a cemetery since the last years of the 19th century.

From 1952 to 1994 Dorf Mecklenburg belonged to the district of Wismar-Land (until 1990 in the GDR district of Rostock , 1990–1994 in the state of Mecklenburg-Western Pomerania ). Since 1994 the community has been in the Northwest Mecklenburg district .

Rambow was mentioned in 1325 when Prince Heinrich II approved a sale of land by Hermann von Rambow; the noble family was first mentioned in a document in 1284. The property was u. a. owned by the von Rambow (13th / 14th century) and von Bülow (1759–1771) families .

Steffin: The estate had been the Ziemsen family's leasehold since 1865. The neoclassical three-story manor house was renovated.

The municipal council of Dorf Mecklenburg consists of 14 members and the mayor. Since the local elections in 2019, it has been composed as follows

The flag was designed by the Rosenthaler Dr. Peter Neichel and approved on August 9, 2012 by the Ministry of the Interior.

The flag is evenly striped lengthways in red and yellow. In the middle of the stripes are the figures of the municipal coat of arms: in the red stripe a white Slavic castle with three towers on the wall, which occupies two thirds of the height of the stripe, in the yellow stripe a looking, yellow crowned black bull's head with a torn red mouth, white Teeth, a knocked-out red tongue, the neck fur torn off at seven points and white horns, which is seven ninths the height of the strip. The height of the flag is related to the length like 2: 3.

There are two industrial parks in the municipality.

Mecklenburg lies on the national highway B 106 from Wismar to Schwerin and the national road L 103 to Kritzow . The A 20 motorway between Lübeck and Rostock runs through the municipality. The closest junction is Wismar-Mitte .

The Dorf Mecklenburg train station is on the Ludwigslust – Wismar railway line . It is served by the regional express line RE 2 ( Wismar - Berlin ) and the regional train line RB 17 (Wismar - Ludwigslust ).