Head of the title page of the Ostsee-Zeitung and Neuer Stettiner Zeitung from June 5, 1908

The Ostsee-Zeitung ( proper spelling : OSTSEE-ZEITUNG ) is a regional daily newspaper in Mecklenburg-Western Pomerania . It is mainly sold in the coastal area of ​​this state.

The traditional circulation area of ​​the Ostsee-Zeitung is almost identical to the former Rostock district of the GDR , which stretched over the entire Baltic coast of Mecklenburg-Western Pomerania. The seat of the publishing house is the Hanseatic city of Rostock .

Since the middle of the 19th century there have been several successive newspapers in the Pomeranian provincial capital of Stettin under the name Ostseezeitung . The first was the Ostsee-Zeitung and Börsen-Nachrichten of the Baltic Sea , published from 1848 to 1905 , which in turn arose from the Börsen-Nachrichten of the Baltic Sea published by the Hessenland Stettin publishing house since 1835 . The successor from 1905 to 1922 was then called Ostsee-Zeitung and Neue Stettiner Zeitung and was again printed in Stettin, whereas the predecessor was published in a Berlin printing house from 1848 to 1905. From 1922 to 1928 the newspaper was called the Ostseezeitung and merged with the Stettiner Abendpost in 1928/1929 . The successor to this newspaper was the Stettiner Generalanzeiger from 1933 to 1939 , from which the Ostseezeitung - Stettiner Generalanzeiger emerged from 1939 until the end of the war in 1945 .

On September 19, 1893, the first edition of the Mecklenburgische Ostsee-Zeitung appeared in Wismar with the subtitle "Neues Wismarsches Tageblatt" and a print run of 5000 copies. " Willgeroth & Menzel" are named as editors and publishers in this first edition .

As far as is known, part of the Szczecin printing plant was relocated to Greifswald in 1945 . When the Rostock district was formed , which was also known as the "Ostseebezirk", the newly created publication (" Zentralorgan ") of the Rostock SED district leadership was named Ostsee-Zeitung . It appeared for the first time on August 15, 1952. With a circulation of 260,400 copies, the Ostsee-Zeitung was the daily newspaper with the highest circulation in the north of the GDR.

Publishing house of the Ostsee-Zeitung in Rostock

Even after the newspaper broke away from its publisher and acted as an independent daily newspaper after the daily newspaper was sold by the Treuhandanstalt , it retained its regionally-related title. Since 1990 it has had the subtitle: "The Independent for Mecklenburg-Western Pomerania".

Since December 2006, Thomas Ehlers has been managing director of the publishing house of Ostsee-Zeitung and Lübecker Nachrichten . Ehlers initiated the rapprochement between the two publishers through personnel decisions and the harmonization of both technical production systems.

The newspaper has lost a lot of its circulation in recent years . The number of copies sold has fallen by 44 percent since 1998. It is currently 111,417 copies. This corresponds to a decrease of 87,713 units. The share of subscriptions in the circulation sold is 87 percent. 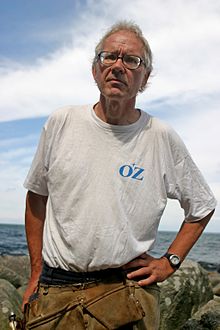 The newspaper appears in the coastal area of ​​Mecklenburg-Western Pomerania. Together with the Schweriner Volkszeitung and the Nordkurier from Neubrandenburg, the entire country is locally divided up and covered by the Treuhandanstalt according to the old three GDR districts at the time of privatization . The following local editions appear in the Ostsee-Zeitung:

In the district of Northwest Mecklenburg, the Ostsee-Zeitung was in direct competition until the end of 2008 for the former main title of its own shareholder Lübecker Nachrichten . Both newspapers had a local editorial office in Grevesmühlen. These were replaced on January 1, 2009 by a joint editorial team that produces the local pages for both titles.

In November 2007, the company announced that it would outsource the editorial team and other areas of the company and move them to joint subsidiaries with Lübecker Nachrichten , in order to create rationalization effects for the company through a joint editorial department . The works council had previously expressed corresponding fears and called for the newspaper to continue to operate independently. The United Service Union and the DGB supported this concern, as did the participants in the Journalists' Day of the German Union of Journalists 2007 in Berlin.

On April 30, 2008 Manfred von Thien left the Ostsee-Zeitung as editor-in-chief. He had held this position since 2006. Thiens was succeeded in 2008 by Jan Emendörfer , who had previously been deputy editor-in-chief.

Jan Emendörfer switched to the Leipziger Volkszeitung as editor-in-chief on April 1, 2012. Andreas Ebel, who has been with the newspaper since 1993 and has been in charge of the Rostock local editorial team since 2002, became editor-in-chief.

Together with the IZOP Institute , the newspaper regularly offers the educational project newspaper in school (ZiSch) to promote reading for schoolchildren. A motto here is "He who can read learns easier". Over a period of four to six weeks, the pupils should get to know the entire work of the press house - from editing to sales.

Newspapers in Mecklenburg and Western Pomerania