former logo until the end of May 2015 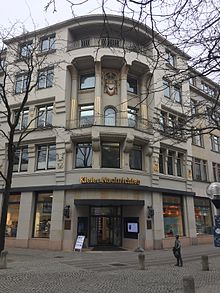 Headquarters of the KN

The Kieler Nachrichten ( KN ) is the only daily newspaper that appears in the Schleswig-Holstein state capital, Kiel . It is published by Kieler Zeitung Verlags und Druckerei KG-GmbH & Co. Together with its regional editions ( Eckernförder Nachrichten, Holsteiner Zeitung, Kiel local, Ostholsteiner Zeitung, Segeberger Zeitung ) it has a sold circulation of 80,147 copies, a decrease of 50 percent since 1998.

Until February 2009, Axel Springer AG held 24.5 percent of the publishing company. Axel Springer AG sold its share to the Madsack publishing company in Hanover. The SPD has a 20.4 percent stake in the Madsack media group through its media holding Deutsche Druck- und Verlagsgesellschaft (DDVG; spelling: ddvg). However, Madsack integrated the KN into the group's own strategy of introducing paywalls for online offers for those regional newspapers that belong to the publishing group. As a result, a lot of content was hidden behind a paywall and corresponding online subscriptions were offered. According to Madsack, “exclusive” content should only be available to paying customers, although the editorial team has so far been given a free hand to assess whether a content is “exclusive”. An extensive relaunch of the newspaper and the website took place in June 2015. A metered paywall has been in place since then.
From January 2012 to September 2015 the editor-in-chief consisted of Klaus Kramer and Christian Longardt. Christian Longardt has been the sole editor-in-chief since the end of September 2015.

The Kieler Nachrichten has lost a lot of its circulation in recent years . The number of copies sold has fallen by an average of 2.5% per year over the past 10 years. Last year it decreased by 3.3%. It is currently 80,147 copies. The share of subscriptions in the circulation sold is 82.5 percent.

In the Werner comic by Rötger Feldmann (alias Brösel), the Kieler Nachrichten is referred to as the “Kiel Night Watchman”.