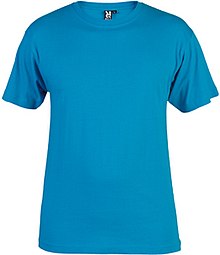 A T-shirt [ ˈtiːʃœːɐ̯t ] (from English shirt ' shirt '), in Bavaria , Swabia , Switzerland , South Tyrol and Austria also known as Leibchen , Leible (in Bavaria and Austria also Leiberl ), in East Germany also called Nicki , is a piece of clothing from cotton jersey with mostly short sleeves , a round or V-shaped neck, no collar, pockets or buttons.

Shape of a T-shirt (drawing)

In the 19th century, the t-shirt was only used as an undershirt , today it is often worn as the only outerwear in warm temperatures and during sports . Since the T-shirt was originally counted as underwear, it was considered morally unacceptable to wear it visibly. While the shirt as clothing for the upper body developed early in all civilizations, it was only at that time that it became common to wear underwear ; there was none before. The bodice was particularly similar in German .

The exact origin of the T-shirt is uncertain, however; the only clue is the entry in the Merriam-Webster dictionary in the 1920s. The seafarers' origin is most often assumed: For a long time they had been wearing a shirt similar to a T-shirt that no longer had a button placket on the front. The short sleeves that distinguish it from the undershirt , on the other hand, are said to have been made by the Navy : Added on the occasion of an inspection of the Royal Navy by Queen Victoria around 1900 , on a model by Henley from 1901, the T-shaped undershirt (in contrast to today known sleeveless undershirt, the A-shaped undershirt ), or when making a training shirt for the US Navy (as opposed to the long unpopular tank shirt ), to name just the most common theories.

The T-shirt became popular after the Second World War , in Europe in the 1960s. In 1948 Thomas Dewey ran for the US presidency and used T-shirts with his motto " Dew it with Dewey " printed on it - what was meant was " Do it [...] " (German: "Do it […]"). It became really popular worldwide through Marlon Brando ( Endstation Sehnsucht , 1951) and James Dean ( ... because they don't know what they are doing , 1955), who appeared in this undershirt in the film, both box-office hits mainly because of the rebellious and erotic characters: In his film, Marlon Brando calls out to Stella in a wet, torn T-shirt that he loves her, the movie poster also shows him muscular in this (still called) undershirt. This made the T-shirt an icon of pop culture .

Particularly in the areas of the former GDR , T-shirts are also known as Nicki , but this term also includes tank tops or undershirts. An obsolete term that is hardly used today is rudder body . Before wearing t-shirts became commonplace, it was known as the garment of sport rowers.

Most t-shirts are made from cotton. Production is briefly explained below.

After the cotton has been harvested, the fibers are cleaned and spun into a yarn in the spinning mill . In the knitting a textile surface is made from this yarn (fabric) produced. Depending on how the stitches are formed, a distinction is made between knitting and knitting . During manufacture , individual parts are punched out of the length of fabric according to a pattern and then sewn into the finished T-shirt.

The shirt can get its color in different stages of manufacture. If there are many single-colored parts, it makes sense to dye the yarn or the length of fabric. In the case of small quantities and many different colors, the finished product is first colored. The pretreatment of the material is always important for the result of the coloring . Depending on the desired depth of color , the natural-colored cotton is bleached more or less. A full white must be achieved for light and brilliant colors. For dark and dull colors a sufficient Tint from.

T-shirts are usually labeled in international sizes such as S, M, L or XL.

Wet T-Shirt Contest - beauty contest in which T-shirts are worn and water is poured over them.