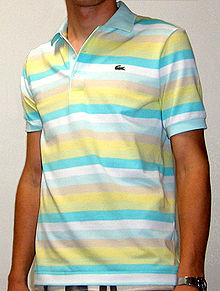 A polo shirt or polo shirt is a shirt with a ribbed collar and sleeves with also ribbed, elastic cuffs. It is a classic in sportswear , but is also used as a uniform item of clothing for workers and as casual wear.

Polo shirts appeared in India in the early 20th century; the subtropical climate required a light shirt for the polo game . It was allegedly inspired by a striped, round cut, about hip-length jersey that Indian aristocrats wore with jodhpurs . However, the successful French tennis player René Lacoste is considered to be the inventor of the modern polo shirt , who made his nickname " Crocodile " a trademark and who designed such shirts as early as 1933, when tennis players were still playing in long-sleeved shirts. The original polo shirts are made from lightly woven cotton piqué . The rugby shirt, which is very similar in cut , is made from tear-resistant jersey material .

From sport and leisure to work clothes

Sports is no longer the main area of ​​use for polo shirts. Because polo shirts are nowadays also used as work clothes: Service staff in retail and catering or factory workers in particular are dressed in uniform polo shirts by their employers, often with the company logo. Polo shirts are somewhere in the middle between simple T-shirts and real shirts . On the one hand, polo shirts are considered to be much more serious and less leisure-oriented than collarless T-shirts, on the other hand, they are also considered to be “more practical” than z. B. proper shirts.

Polo shirts are made by almost all men's fashion manufacturers. This is because it was originally an exclusively “male” piece of clothing.

The original Lacoste brand now also produces other fashion items that go beyond the original work of father René Lacoste. After the war, the former British professional tennis player Fred Perry also started making polo shirts. The emblem - a laurel wreath - was embroidered on his shirts and not sewn on like Lacoste's crocodile. The Ralph Lauren polo shirt is also very well known .