The Şehitlik Mosque ( Turkish: Berlin Türk Şehitlik Camii ) in Berlin was built between 1999 and 2005 on the historic Turkish cemetery on Columbiadamm in the Neukölln district by the Turkish-Islamic Union of the Institute for Religion (DITIB) on the site of a previous building with the same use. The mosque took its name from the Turkish cemetery, which was laid out as a diplomatic cemetery back in 1866. The Şehitlik , derived from Şehit (English martyr ), means cemetery here.

Entrance to the Turkish cemetery

The mosque with neighboring buildings was designed by the architect Hilmi Şenalp from the construction company Hassa Mim. Effort. Ltd. AS exported from Turkey. Şenalp also planned the mosques in Ashgabat ( Turkmenistan ) and Tokyo ( Japan ) and directed the construction work. For the Şehitlik Mosque he made the implementation plans . The statics were calculated by Hüseyin Portakal in Augsburg. The foundation stone for the building was laid in 1999. The shell construction was carried out under the direction of Tarkan Akarsu from Berlin, who also submitted the addendum to the building permit for changes to the structure. 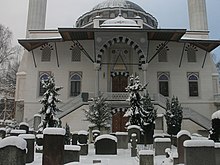 Mosque in the Islamic cemetery in winter

The second construction phase is the mosque with four floors. The basement was planned as a multi-purpose hall. The ground floor is currently used as a prayer room and will be used in the future as a meeting room and replacement prayer room, the actual mosque is on the first floor. The minarets are also available from the first floor. As a rule, women pray on the gallery floor.

The third construction phase began at the end of 2006 with the groundbreaking for the construction of an information and meeting center.

The meeting center was financed with 70,000 euros from the "Socially Integrative City" program, donations from the Sehitlik community (750,000 euros) and funds from the Turkish Ministry of Cooperation and Coordination (250,000 euros). On February 27, 2015, the Kulturhaus was opened with the exhibition "Turks, Moors and Tatar Muslims in Brandenburg-Prussia".

The mosque serves the Muslims of the neighboring districts, especially Neukölln and Kreuzberg , as a place of prayer, the prayer language is mainly Turkish , depending on the occasion also Arabic . In addition, most of the funeral ceremonies of the Islamic community in Berlin take place in the mosque, the dead are then transferred to the Gatow landscape cemetery or to the home of the deceased, as the Turkish cemetery directly at the mosque as well as the Muslim grave fields of the New Garrison Cemetery are fully occupied.

Cultural center in the shell, right next to the mosque

Since the mosque has not only religious but also social tasks and serves as a community center, there are rooms for these purposes.

Data on the structure

The total gross floor area of ​​the gallery floor is around 145 m². The main dome with a diameter of 12 meters sits on an octagonal girder. The eight half-domes transfer the load of the dome to the outer wall and thus to the foundations. The basement and the ground floor are each 3.5 meters high and the first floor is 8.47 meters up to the small domes and 15.42 meters up to the main dome. The height under the gallery floor is four meters.

The total height from the outside of the main dome to the mosque floor is 16.5 meters, and 21.1 meters to the surface of the earth. A clear height of 16.32 meters can be measured in the mosque . The length of the minarets, from the first floor and without a point, is 25.03 meters, with the point up to the crescent 33.56 meters. The total size of the third construction phase is around 505 m². In the end, the cultural center will have around 2805 m².

On the building structure and design

The buildings from the classical period are classified according to the structure using architectural terminology. Basically the shapes used are the four-, six- and eight-domed pillar plans. The mosque was built from a steel structure with octagonal dome-bearing pillars and supporting arches.

At the same time, the design options for the central area formed the development criteria of this construction method in classical Ottoman architecture, because the type and construction of the time limited the enlargement of the central area. Typical examples of an eight-pillar plan are the Selimiye Camii in Edirne and the Kadirga Sokullu Pasa Camii in Istanbul .

The canopy is a mundane structural element that is only rarely used in mosques. It was implemented here in order to keep the facade design of the complex uniform. On the facade of the mosque are the bird palaces, which show the consideration of the architecture of the time for the animals.

The main focus of the interior decoration was the harmony of the mixed use of ceramic and marble . This can be observed in the prayer niche, sermon crown, sermon office and between the arches. Such mixed use of these materials was not known in the classical period. This mosque is therefore not a repetition or copy of any mosque, but represents a new form of design options of the classical period. The marble used was mined and processed on the Marmara Island . 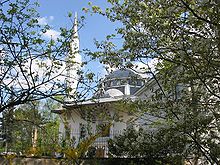 The ceramics on the building are real İznik ceramics , which were deformed, designed and colored by hand in the Turkish city of İznik . The bottom of the ceramic is made of quartz sand . The raw panels are colored for hours after production and then sanded. Then the motifs are applied using the dust technique (the same technique was used on the main dome), after which they are painted. The motifs and colors are solidified on the ceramic in an oven at 600 ° C. Finally, the plates are glazed and baked in an oven at 900 ° C. The amount of heat and the time it remains in the oven are decisive for a satisfactory result. Sometimes the desired quality of a ceramic piece is only achieved after it has been repeated five to six times.

All materials used such as wood, marble or plaster windows were prepared and installed true to the original with great effort. The plates with the names Allah , Mohammed , Abu Bakr , Omar , Osman , Ali , Hasan , Hüsseyin on them are the transitional elements . The sharp intermediate cuts of the transitions from the main dome to the small domes are optically facilitated by these elements.

The muqarnas , which are located in the lower layer, are also transition elements that allow the aesthetic connection between the small domes and the outer walls. The muqarnas are an art whose design and execution is currently threatened and is increasingly being forgotten. The verses Ihlas-i Serif traditionally stand on the main dome , the scripts are decorated with 23 carat gold. Usually the color of the background is cobalt blue, but here dark green was chosen, which was very often used in mosques from the earlier period. The main colors used are titanium oxide (white), cobalt blue, iron oxide (orange, red) and ocher (yellow), other colors are created by mixing these main colors.

During the execution of the calligraphy , the position and width of the lettering were first drawn with a pencil on the wall and on the dome. The thickness of the letters was decided based on the distance between the dome and the ground on site. It should be noted that the text must appear neither too small nor too large to the reader. Then the frame and the motifs were added around the font. Ultimately, the entire design, from the main dome to the column socks or from top to bottom, was developed bit by bit in terms of the balance of colors and sizes after several adjustments. The calligraphy of the mosque was carried out by Hüseyin Kutlu, whose teacher is the Necmeddin Okyay . The painting was designed by Semih Irtes on site and adapted and painted to the walls and domes. These and the artists, specialists or plasterers not mentioned here came to Berlin from Turkey only for the construction of this mosque.

View from the Hasenheide to the minarets

Shortly before the opening of the mosque in 2003, measurements by the Neukölln district office as the building supervisory authority showed that the minarets are now 37.10 meters instead of the approved height of 28.60 meters. Even the dome, with a height of 21.30 meters, deviated from the building permit by 4.10 meters. This was considered problematic because of the close proximity to Tempelhof Airport . The authority demanded the demolition and a fine of half a million euros.

In October 2003, the authority and the client reached an agreement to "remedy the construction defects by adding an addendum to the building permit", but to impose a fine of 80,000 euros on the client .

In June, August and November 2010 the mosque was the target of four arson attacks , always in the same place. In January 2011, a suspect was arrested and initially in a psychiatric hospital of Maßregelvollzugs housed. In July 2011 the perpetrator was sentenced to two years and nine months in prison.