This article is about young female people; for further meanings see girls (disambiguation) . 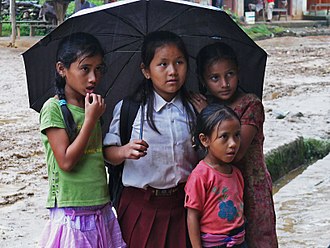 Nepalese girls in the monsoon

A girl , also colloquially a girl , is a child of the female gender or (obsolete) a young female person until they marry . The word used to be short for housemaid . Biology, medicine, developmental psychology , pedagogy , cultural anthropology , social history , social science , cultural history and cultural studies deal with girls scientifically . To interdisciplinarity , the girls research effort.

The term girl as a term for “adolescent, female child, friend of a young man”, uses a diminutive suffix and is etymologically a diminutive of the medieval word maid . It was the first in the 15th century Middle Low German mēgedeken used and in the Upper East Germans Medichen early 16th century, from which Mägdchen in the 17th century and finally girl was born. Martin Luther used the terms Meidlin ( maiden ) , Jungfraw ( virgin ) and prostitute in his translation of the Bible . Until the 20th century, the term girl was often used for domestic servants or the girlfriend of a young man. In a supplement, the Duden points out: “In modern parlance, the word girl should only be used in the meaning child of the female sex. In the other outdated or outdated meanings, the term girl is increasingly seen as discriminatory. "

The word maid originated in Middle High German from mait, meit , which originally means ' virgin , unfree girl, servant' and is the contracted form of mhd. Maget , early New High German Meid ( diminutive Meidlein ). After the importance was lost in the course of the 16th century, it was revived in romantic poetry . At the beginning of the 20th century, the term was related to the students of agricultural household schools. Female members of the Reich Labor Service in the Nazi state were designated as work maids . The Duden calls its use today as “out of date, still mocking”.

In addition , girls with the diminutive suffix -el were formed based on the Upper German . In the past, the term girl was sometimes used for propaganda purposes. This is what the National Socialists called the youth organization for women, the Association of German Girls . It was therefore temporarily listed in the Unmenschen dictionary in 1957 as one of 28 expressions which, in the opinion of the authors, should be deleted from the German vocabulary because they embodied the “vocabulary of tyranny”. Its use is occasionally taken up again by today's right-wing extremist scene (see Mädelring Thuringia ), but is widespread in everyday language , often in an ironic form.

The following important information is missing from this article or section:
Other cultures and religions, role or status of girls, for example in China or India (such as one-child policy or caste system ) or historically also in Europe (read: cultural history ), evidence so far only from the Bible (at least 40 individual references, which on its own is not very encyclopedic since it is only a primary source); To primary vs. Secondary sources in general cf. also WP: guidelines history
Help Wikipedia by researching and pasting it .

Terms associated with girls in the Old Testament include grace and beauty , jewelry , playing musical instruments and singing wedding songs, dance , virginity and courtship , but also bride robbery , rape and mourning . In the Bible, girls are not subject to any special commandments that apply only to them.

The Old Testament is rich in memorable female figures; Among them are, for example, Abraham's future daughter-in-law Rebekah , Jacob's daughter Dina , Miriam , the sister of Moses , King David's young nurse Abischag , the later Queen Esther and the lover in the Song of Solomon, sometimes referred to as Sulamith .

In Orthodox Judaism , different ritual laws apply to girls than to boys . While boys are circumcised soon after birth as part of a rite ( Brit Mila ) , the rites of the birth of a girl are usually limited to the father announcing the daughter's name at the next Torah reading in the synagogue . Since neither the Mishnah nor the Talmud contain any regulations on this question, the naming ceremony for newborn girls ( Zeved habat , Simchat bat ) is handled inconsistently within the various currents of Judaism as well as historically and regionally. Just like boys, girls in Orthodox Judaism study Jewish literature, in particular the laws that regulate the mitzvot to be fulfilled by women , e.g. B. Sabbath , Kashrut and family purity related. A rite of passage for girls, called Bat Mitzvah , corresponding to the Bar Mitzvah , only exists outside of Orthodox Judaism.

The talk about girls in the New Testament is more economical and less poetic than that of the Old Testament. The most famous figure is the Virgin Mary , a young girl at the time of the Annunciation . The New Testament also reports on Salome , the daughter of Herodias , who asks for the head of John as a reward for her dance . But girls also appear in the miracles of Jesus , including the twelve-year-old daughter of Jairus , who was raised from death by Jesus , and the little daughter of a Greek woman who was driving out a demon from Jesus .

In principle, Christianity has no different rites for girls and boys. In the Roman Catholic Church and the Orthodox Churches , however , some sacraments and sacramentals can only be received by men or women.

Historically, girls in Germany were only legally allowed to participate actively in youth movements such as Wandervögel , which emerged at the beginning of the 20th century , although there were reservations within the organizations. Hans Breuer , for example, called the mixed hikes softening the boys and turning the girls to ruin and feral. According to Klaus Farin , current youth cultures , which in his opinion are becoming less important in youth work , are still largely male dominated. Nevertheless, in spite of their lower number, girls also have active roles and are by no means just “followers”. He sees girl-oriented scenes in cosplay culture , for example . Angela McRobbie saw girlie culture as a girl-alone modern movement of pop culture . Jonas Engelmann , on the other hand, called emo the first youth culture in which boys would have adapted to girls.

Research on girls, a branch of women's studies , has been devoting itself to the scientific recording of the economic, political, social and cultural factors that determine the living conditions of girls since the late 20th century . The scientific and social discourse about girls was stimulated, among other things, by Elena Gianini Belotti's essay What happens to little girls? Published in Italy in 1973 .

In Germany in the 1980s there were first approaches to gender-differentiating research on girls. The expansion and increased promotion of women’s studies and projects at that time was also reflected in projects and courses specifically on work with girls at university institutions. The 6th Youth Report 1984 provided a well-founded basis with 39 expert reports on the life worlds of girls and their perspectives. The demand for targeted support for girls in all areas of youth welfare was derived from this. In 1991, the educational and social scientist Claudia Franziska Bruner published an initial overview of the results of young girls research . A review article by Helga Kelle followed in 2008.