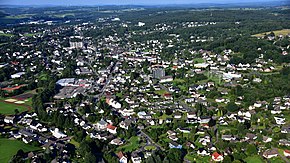 Waldbröl is a small town in the south of the Oberbergisches Kreis in North Rhine-Westphalia ( Germany ). It bears the additional name "market town".

The city lies on the slopes of the Nutscheid and is part of the Bergisches Land Nature Park . The city of Cologne is 64 kilometers and the city of Bonn 55 kilometers west of Waldbröl.

The main town of Waldbröl is much larger than the main towns of all neighboring municipalities and serves them as a shopping and service town. Starting clockwise in the north are the Reichshof , Morsbach , Wissen (Sieg) , Windeck , Ruppichteroth and Nümbrecht . In the south, the city limits also represent the state border with Rhineland-Palatinate with its association community of Wissen .

In addition to the core town with around 11,000 inhabitants, there are 64 districts: 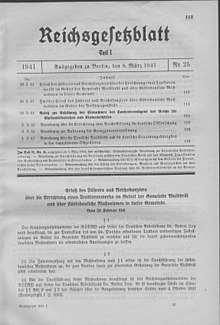 Decree of the Führer and Reich Chancellor about the establishment of a tractor factory in the area of ​​the municipality Waldbröl and about urban development measures in this municipality. 28 February 1941

In 1131 the place was mentioned for the first time as Waltprugele in a papal confirmation of ownership for the St. Cassius monastery in Bonn . Pope Innocent II confirmed the ownership of the church and the tithe in Waldbröl in the document . At that time the settlement belonged to the sphere of influence of the first Berger counts ( Duchy of Berg ) as well as the Sayner. In the same year the construction of a new church began, the tower of which is still standing today (Protestant church). In 1174 Waldbröl came to the Homburg rulership , which belongs to the Counts of Sayn . However, the ownership structure between the Counts von Berg and von Sayn remained controversial.

In 1212 the first inhabitant of Waldbröl was mentioned in a deed of donation when the resident priest Wolradus transferred property to the Siegburg Abbey Michaelsberg . In 1261 the knight families of Isengarten , in 1300 of Diezenkausen and in 1323 of Beuinghausen were mentioned for the first time. They were long time ministerial of the Counts of Sayn and from mountain and received by the counts in the area of today's town fief possession .

In 1314 Waldbröl experienced a plague epidemic and a great famine. The first present-day districts of Waldbröl were mentioned in 1316. In 1575 almost all of today's districts were found on a map by Arnoldus Mercator .

In 1604 Waldbröl fell to the Duchy of Berg as a result of the Siegburg settlement and was added to the Office of Windeck . When Johann Wilhelm , the last Duke of Jülich-Kleve-Berg , died in 1609, the Wittelsbach Duchy of Pfalz-Neuburg was attributed to the Treaty of Xanten Berg and thus also to Waldbröl.

From 1816 to 1932 Waldbröl was the seat of the district administrator of the Prussian district of Waldbröl, which existed at the time .

In 1912, the then little-known English novelist DH Lawrence visited his cousin Hannah Krenkow, who lived in Waldbröl. In addition to numerous letters to his lover Frieda von Richthofen , Lawrence wrote parts of the novel “Sons and Lovers” in Waldbröl, which appeared the following year and established the author's world fame.

In 1913 the city received a visit from Kaiser Wilhelm II , in his honor the main street was renamed "Kaiserstraße".

Robert Ley , who came from Niederbreidenbach near Nümbrecht and was one of the leading representatives of National Socialism , intended to make Waldbröl the “largest city between Cologne and Kassel”. Among other things, the so-called “ People's Tractor Works ”, an “ Adolf Hitler School ” and a KdF hotel were planned. Clemens Klotz was commissioned with the planning . None of this was implemented except for the hotel based on a design by Karl Preus, which, however, was not finished either. The population should rise to up to 300,000. A subway, barracks, a theater, a cinema and a motorway connection should be set up. The plans ran until autumn 1944, but remained stuck in the basics due to the development of the war and Ley's dwindling influence. Only the topographical investigations by the garden and landscape designer Wilhelm Heintz , who was previously involved in the development of the city maps of the "City of Hermann Göring Works " ( Salzgitter ) and the "City of the KdF Wagons" ( Wolfsburg ), were largely carried out completed. Of the few buildings that have been erected, only the “KdF Hotel” has survived, apart from a few ruins. After the war it was used as a hospital, then by the armed forces and, since 2006, as a meeting place for a Buddhist religious community. In addition, the former architect house of the planned Adolf Hitler School still exists . It has been the school camp of the Humboldt-Gymnasium Düsseldorf since the early 1950s .

Waldbröl district in the 1960s

In 1957, Waldbröl was the third municipality in the Oberbergischer Kreis to be granted city rights.

From 1990 to 2006, Waldbröl was the location of the Federal Armed Forces Academy for Information and Communication , which was founded here and - like its predecessor institutions, "Center for Transformation", "School for Psychological Defense", "Academy for Communication", "Office for Studies and Exercises" "And" Center for Analyzes and Studies "- in the" KdF Hotel "mentioned above.

Since 1990, Waldbröl has been the target of heavy immigration by (late) repatriates from the Soviet Union and the CIS ; at least 3,000 immigrants became new citizens of Waldbröl alone. This process was promoted, among other things, by the fact that Horst Waffenschmidt , who lives in Waldbröl, was the Federal Government's representative for emigrants from 1988 to 1998. 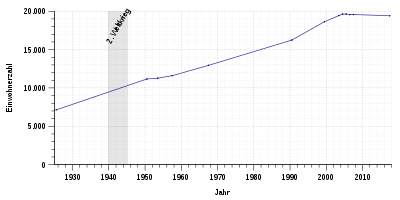 The city council is the municipal representative of the people of Waldbröl. Every five years, citizens decide on the allocation of the 34 seats in a general, direct, free, equal and secret ballot. The results of the city ​​council election on May 25, 2014 and the resulting distribution of seats are shown in the diagrams opposite.

View from the market square - on the left the Catholic, on the right the Protestant church

A civil service school of the Federal Office for Family and Civil Society Tasks is located here as a further training and further education facility.

Besides the two major faith communities are also various Free Churches established, including the Free Evangelical community that Christianity Baptist church that Christianity Mennonite Brethren Church , the Christian congregation , the Apostolatsgemeinde of the United Hearts of Jesus and Mary, as well as Jehovah's Witnesses .

There is a mosque in the city for the Islamic community .

Since autumn 2008 Buddhist monks and nuns from the tradition of the Vietnamese Zen teacher Thich Nhat Hanh have been practicing at the European Institute for Applied Buddhism (EIAB), which is located in the former KdF Hotel and also offers courses for interested laypeople.

The Waldbröler Vieh- und Krammarkt , the city ​​festival , a Martinsmarkt, a Christmas market and various other events take place regularly in the city .

Due to its importance as an economic and traffic center of the southern Oberbergischer Kreis, Waldbröl received town charter in 1957 . Urban character can be seen in indicators such as retail centrality (132%), student ratio (23%), crime rate and frequency of traffic accidents (43% and 39% above the district average).

76% of the workforce are employed in the tertiary sector , the manufacturing sector is comparatively little represented, and the commuter balance is negative.

There are two business parks in the city:

The company spectrum is broad and extends from gear and shop construction to electrical heating technology, plastics processing, pallet and household appliance manufacture to wood and metal construction.

Waldbröl has a train station on the Wiehltalbahn (line 2680), which is currently only used for goods and tourism traffic. In 1965 the passenger traffic was stopped on this, on October 5, 1994 also the freight traffic.

Since then, a citizens' initiative has been campaigning for the preservation of the now listed route.

Passenger traffic on the Bielstein – Waldbröl line was given up in 1957 and the tracks disappeared in 1966.

Waldbröl is therefore only available in regular local rail passenger transport from Dieringhausen station on the Oberbergische Bahn from Cologne main station via Overath , Gummersbach in the direction of Marienheide and from Schladern (Sieg) station on the victory route from Cologne via Troisdorf - Siegburg - Hennef - Au (Sieg) - Betzdorf accessible after victories .

In local road transport , the following lines run from the bus station to all neighboring communities:

In 2006 local politicians tried to shut down the 'railway line 2680' from Reichshof to Waldbröl. “The completely indebted city of Waldbröl was so important to the matter that it ignored the austerity stipulations of the district government. She took out a loan of 430,000 euros from the Landesbetrieb Straßenbau in order to be able to pay the purchase price without authorization. ”After the courts had ruled in favor of the continued operation, the dispute was settled in 2011.

The city is connected to the national road network via the federal highways 256 and 478 .

Cities and communities in the Oberbergisches Kreis