The Sauerland Mountain Association , SGV for short , is an association for hiking , cycling and Nordic walking . It is entered in the register of associations at the Arnsberg District Court (VR 264). In addition to the Sauerland , the club area also includes the Ruhr area , the Münsterland , the Bergisches Land and the Siegerland . It has around 33,000 members in 2019.

Purpose of the association

Signposting of the hiking trails of the Sauerland Mountain Association

The SGV organizes events and is involved in nature conservation . The association looks after several thousand hiking trails , including numerous long-distance hiking trails . In his sphere of activity, in addition to the administrations of the nature parks , he is exclusively authorized by the state of North Rhine-Westphalia to mark hiking trails in the open landscape with signposts . The network of hiking trails is around 34,000 km long, of which around 4,300 km are designated as main SGV hiking trails . The association owns several dozen hectares of forest that were acquired in order to dedicate them as a nature reserve.

The magazine "Kreuz & Quer" is published quarterly for members with a circulation of 46,000 copies. The editor-in-chief of this publication is the Iserlohn journalist Thomas Reunert . 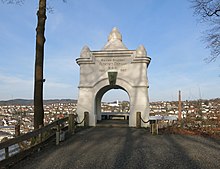 On May 25, 1890, the forestry councilor Ernst Ehmsen and the senior teacher Karl Féaux de Lacroix from Arnsberg wrote an appeal to found a “Sauerland Tourist Association” after they joined people from the de Lacroix college, namely the teachers Busch, Daldrup, Rosbücker and Stöcker, who had won the support of numerous Sauerland dignitaries , including lawyer Hesse, district court counselor Wilhelm Müller , pharmacist Schwarz and later also the mayor of Arnsberg, Max Löcke .

Shortly thereafter, Ehmsen and de Lacroix formed an "Arnsberg Section of the Sauerland Tourist Association". In the months that followed, Ehmsen founded a further 44 departments on his forestry business trips, 27 of which by the beginning of 1891 had already been officially accepted into the association; one criterion for this was an orderly cash system. Ehmsen won it in the places again Honoratiorenschaft as pastors, teachers and village head and above all restaurant owners. In 1891 the name of the club was changed to the Sauerland Mountain Club.

The first general assembly met on July 19, 1891, with 54 official departments. From their ranks came other well-known functionaries such as the District Court Councilor Wiethaut (Hagen), Karl Kneebusch (Dortmund), Rector R. Rebling (Altena), who, alongside de Lacroix, Schütte and Müller, formed the first board of directors under Chairman Ehmsen. Departments also emerged far outside the Sauerland, for example in Berlin and Warsaw .

The association sponsored the construction of numerous observation towers on the Sauerland heights. As early as 1894, 24 of the 25 observation towers in the Sauerland were owned by the SGV, only the Astenturm was not one of them. This tower was also viewed critically among parts of the association, as extensive financial resources of the association flowed into these projects that were no longer available otherwise. Many towers, especially those made of wood, did not withstand the weather conditions for long.

The association developed an initial network of hiking trails and marked popular hiking trails by means of signposts in the landscape. In 1905, the then chairman of the path commission of the main association and at the same time the first chairman of the Hagen local department, the engineer Robert Kolb , created a uniform system of signs and a network of main paths that were uniformly provided with the St. Andrew's cross. These signposts were painted in white on trees and other suitable places.

Since 1903 the SGV has published articles on the subject of nature conservation . These thoughts led to the acquisition of forest areas as early as 1911 in order to put them under protection. Over the decades, numerous other areas were acquired by the association for this purpose. Wilhelm Münker, a co-founder of the German Forest Protection Association, came from the ranks of the SGV .

The German Youth Hostel Association was founded in 1919 under the leadership of SGV officials Richard Schirrmann , Wilhelm Münker and Julius Schult to support SGV youth work .

Individual local departments in the Ruhr area and the Bergisches Land were founded around the turn of the 19th and 20th centuries and operated outside the original association area. When local departments existed across the board in these areas, these were grouped into gaue and districts. After the Second World War, the Gau level was dissolved. Up until the 1930s in particular, the club's territory expanded to include neighboring regions of the Sauerland , also benefiting from the political decisions made during the National Socialist era .

In the time of National Socialism, the association was promoted by the rulers because, on the one hand, the closeness to nature and traditionality of the bourgeois association had to be brought into line with the ideological ideas of National Socialism and, on the other hand, the association in contrast to the socialist migratory movement, such as that from the labor movement emerged friends of nature , pursued rather apolitical goals. This led to the expropriations of properties belonging to other hiking clubs, which were then added to the SGV.

In the 1930s, the main chairman, Karl Eugen Dellenbusch, was an active party member of the NSDAP as Vice-President of the Arnsberg District and Vice- President of the Rhine Province and, during the Second World War, as an SS brigade leader in Josef Terboven's management staff, played a key role in the occupation of Norway . After the Second World War he was re-elected as main chairman.

With the creation of the motorist circular hiking trails in the 1960s in cooperation with the ADAC , a dense network of hiking trails was created in the club area, with hardly any gaps. The voluntary maintenance of this network turned out to be difficult at the end of the 20th century and beyond due to a persistent decline in membership. The reason for this is an increasing aging of the membership structure. In individual local departments there are no longer any active members who can or want to do voluntary work on the roads, so that parts of the road network threaten to disintegrate.

The association tries to accommodate this development, among other things, through new campaigns such as the youth portal S'Ourland and reforms such as the structural reform, in which districts are to be merged into regions, and the road quality reform 2: 1. With the 2: 1 route network reform, many routes will be removed from the network and others will be upgraded.

A chronological overview of all presidents of the SGV since it was founded:

Emblem on the Karlshöhe observation tower in Halver

A restructuring has been taking place since 2005, in the course of which the districts were merged into nine regions. At the end of this process, the district level is to be completely replaced by the regional level, thus streamlining the structures.

The division of the regions (new) into districts (old) is currently as follows:

The advisory board consists of dignitaries and representatives of friendly associations. The entire association operates a main office with a full-time managing director who is responsible for the association administration, the youth education center and the association's own hiking academy.

The association is a partner in a Marketing GmbH , which is responsible for marketing, communication , event management and sponsoring . 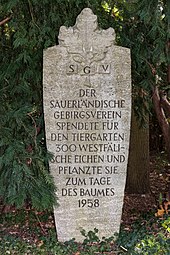 Memorial stone in the Great Zoo