from Wikipedia, the free encyclopedia
New youth hostels in Germany. 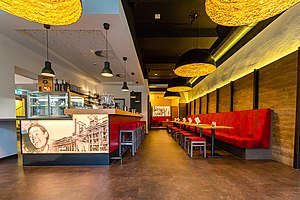 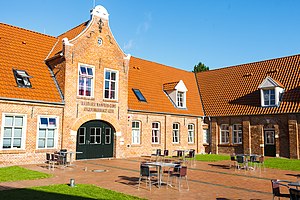 The youth hostel in Leer reopened in May 2012 as an integrated operation after a complete renovation. 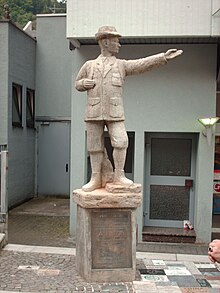 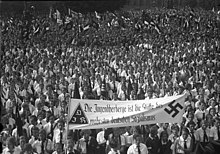 Parade of the Hitler Youth in Berlin's Lustgarten on August 19, 1933, banner with DJH logo, swastika and motto: "The youth hostel is the site of the truest German socialism."

Membership in the German Youth Hostel Association is a requirement for an overnight stay in a youth hostel in Germany. Abroad, DJH members can stay in hostels that have joined together to form Hostelling International or receive discounts there. DJH membership is concluded with the regional association responsible for the place of residence. In addition, corporations (e.g. clubs or schools) can apply for corporate membership.

After the fire brigade, the technical aid organization, the German Red Cross, the White Ring and the Johannitern, the DJH ranks 6th out of a total of 137 organizations in the GemeinwohlAtlas 2019 study. In the first study from 2015, the DJH ranked 8th.

The German Youth Hostel Association is a member of the European Movement Network .

Richard Schirrmann had already joined the Sauerland Mountain Association (SGV) in 1903 and in 1907 took over the management of a school and student hostel in Altena . After he had contact with a Wandervogel group led by Burkhart Schomburg in 1909 , he founded his own Wandervogel flock in Altena. The idea of ​​setting up youth hostels matured in the same year. Schirrmann himself dated the birth of the youth hostel idea on August 26, 1909. At that time he was on an eight-day hike from Altena to Aachen with his students and came into a storm with them near Bröl in the Rhein-Sieg district . They were looking for accommodation with a farmer in his barn. When he was turned away there, he turned to the village school opposite, which was currently empty because of the holidays. The headmaster's wife gave the group accommodation; After all, the oat straw came from the farmer. This experience gave Schirrmann the idea that accommodation of a similar kind should be made available to every traveler (in memory of the "spiritual birth" of the youth hostel idea, the institution, which still exists today, was named Richard Schirrmann School ). A year later Schirrmann wrote an essay about hostels for elementary school students and called for donations. The proceeds were used to set up holiday hostels in three schools.

Richard Schirrmann and the co-founders Wilhelm Münker and Julius Schult were high-ranking SGV club officials who initially set up the youth hostel system for their internal youth work. The first (holiday) youth hostel was opened in Altena in 1912 . In that year the Sauerland Mountain Association founded a “Committee for Youth Hostels” with Schirrmann as chairman, Münker as managing director and Schult as the third board member. In 1912, Schirrmann and his family moved into an apartment at Altena Castle. In addition to his job as a teacher, he became a hostel father. The first permanent youth hostel opened in Altena Castle in 1914 .

In 1919 the "Central Main Committee for Youth Hostels" was brought into being. In 1932 there were 2,123 youth hostels in Germany with more than 4.5 million overnight stays. The International Youth Hostel Federation was founded this year.

Richard Schirrmann is characterized as a völkisch nationalist. He wanted to encourage the wandering of the German youth, this should lead to more love for homeland and fatherland and create physical and mental conditions to defend the German nation in a war. In addition, ideas from life reform, reform pedagogy and the youth movement flowed into the concept . Due to its orientation, the movement benefited from the support of the state and society and was able to lay the foundations for the association that encompassed the entire territory of the Reich during the First World War.

On March 12, 1933, Schirmmann, as chairman of the Reich Association for German Youth Hostels, signed the Kosen Agreement on cooperation between the Youth Hostel Association and the Reich Youth Leadership of the NSDAP , which led to the association's integration into the Hitler Youth . Through this agreement and other measures of self-alignment such as the removal of the social democratic (and a few Jewish) functionaries who had been admitted since 1919 from their offices, the functionaries demonstrated their willingness to cooperate.

After the Second World War, the main association was re-established in 1949 at Altena Castle . In 1990 the state associations of the new federal states also joined.

For the 100th anniversary in 2009, a 55-ct special stamp from Deutsche Post and a commemorative coin worth 10  euros with the inscription “BEGEGNUNG GEMEINSCHAFT TOLERANZ” in the margin appeared .

The German Youth Hostel Association receives annual grants from the federal and state governments amounting to 3 million euros; In 2014, a complaint from the hostel operator A&O Hotels and Hostels against this subsidy was submitted to the EU Commission . In October 2015, the EU Commission had already determined that the VAT exemption is permissible. With regard to the subsidies, the EU Commission closed the proceedings in mid-2017.

a slightly older house in Marburg (2016), four years before dismantling

Due to the coronavirus pandemic, all youth hostels had to close from mid-March 2020, so that the income in the spring was almost completely lost. The first youth hostels were able to reopen from mid-May 2020.

178 voluntary local and district associations and 442 youth hostels are subordinate to the regional associations.