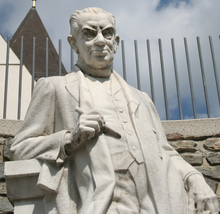 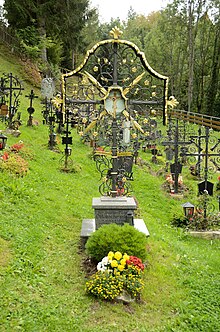 Memorial plaque for the opening of the railway line to Pinkafeld in Friedberg station, with a poem written by Ottokar Kernstock and dedicated by Hans Schürff

Otto Kernstock was born in Marburg an der Drau, his mother's hometown, where he spent the first years of his life with his two younger siblings. His father came from Prachatitz in the Bohemian Forest . In 1855 the family moved, as Kernstock's father was transferred to Graz as an Imperial and Royal Finance Officer . After his Matura at the kk Realschule (today Academic Gymnasium ) in Graz, he first studied law and became a member of the Academic Singers “Gothia”.

In 1867 he joined the canons of Vorau , where he was given the religious name Ottokar . In 1871 he was ordained a priest . Kernstock was initially archivist and librarian of the monastery and from 1873 worked as a chaplain in Waldbach , Sankt Lorenzen am Wechsel and Dechantskirchen . From 1889 until the end of his life he was pastor of Festenburg in Eastern Styria . A Kernstock museum has been set up in Festenburg Castle today.

In 1916 he was offered the opportunity to become a lecturer in poetics, rhetoric and style at the teachers' academy of the Vienna Pedagogy. Karl Kraus criticized this violently in his magazine Die Fackel . Kernstock finally decided against the offer.

Ottokar Kernstock's grave is in the mountain cemetery below Festenburg Castle. The tomb, initiated by a Kernstock tomb committee , was created in 1929 by the Styrian architects Rudolf Hofer (1894–1956) and Hans Hönel (1884–1964).

From 1875 onwards, Kernstock published historical and fictional works. His poems appeared in the Munich magazine Fliegende Blätter from 1878 . After he took up his post as pastor in Festenburg in 1889, he began to write poetry in the tradition of late Romanticism .

In the spirit of the national struggle that the active exponents of the German Nationals in the Duchy of Styria believed they had to lead against Slavicism (to which the Slovene minority living in Lower Styria belonged), he wrote about the origins of his parents:

[…]
In the Bohemian Forest, reinforced with ramparts and gates,
where my dear father was born.
The man was German, his homeland was core German,
Eh 'Slavs tricked it away bit by bit!

Poems such as Civis Germanus sum! or a find . In Die Deutsche Eiche he formulated:

[...] Slavic linden trees
stand in dense
rows with pines, Welsch type
and
paired with Bohemian spruce there as friendly neighbors.
But in the middle of
this green glory,
the German thunderous oak rises
like a hero of the giant age.
[...]

On the occasion of the separation of Lower Styria from Styria after the First World War without a referendum, he addressed similarities between Germans and Wends (Slavs):

But the great, the German and Wenden,
once created with strong hands, enthusiastic about
home and brotherly,
cannot be broken by a change of times.
Thankfully we want to announce it and say:
Styrian south, God bless you!

For Peter Rosegger's birthplace he composed the following verses:

Take off your hat, wanderer, and stand reverently!
Because a miracle happened here before.
In the eighteen hundred
and forty year and then in the third, in the hay
moon,
a mortal mother gave birth to an immortal child , surrounded by pine trees and the alpine wind .

This is where Rosegger was born.
All those who are truly devout to humanity,
their noblest, greatest and best
come from huts, not from palaces.

He became known to a broader public in 1901 with his volume of poetry Aus dem Zwingergärtlein and soon achieved the same level of popularity as his friend, the writer Peter Rosegger. He expressed his religiousness, for example, in the poem Zwei Kreuze , his ties to his homeland in the Wechselgau .

Wechselgau, meager harvests ripen on your
armchairs, Your sons were only given a poor earth lot.

Narrow fare, a Loden dress, hard work
all the time - Wechselgau, Waldheitmatboden, oh how poor, how poor are you!

But so many, who became miserable and sick from the evil world poison, are forever
recovered when they drank your springs.

Many a beggar became king here; because in the forest peace
a happy people teaches him how little happiness belongs to happiness.

He doesn't exchange your mountain rest with all the imperial treasures ...
Wechselgau, Waldheimatboden, oh how rich, how rich are you!

During the First World War , he appeared in 1916 in the volume of poetry, Steirischer Waffensegen , written together with Peter Rosegger, with chauvinistic, bloodthirsty war poetry that was not uncommon in times of war.

In 1920 Kernstock wrote a text for the melody of the imperial hymn entitled German-Austrian folk anthem (contained in the volume of poems Der redende Born, 1922). By decree of the conservative federal government Schober III lyrics and melody were as be blessed without end on 13 December 1929 for the national anthem explained and they remained even during the Austro-fascist corporate state to 1938th

In 1923 he wrote the swastika song for the Fürstenfeld local group of the German National Socialist Workers' Party (DNSAP). The song was used in the election campaign in the Sudeten German areas of Czechoslovakia and sparked protests by the Christian Social Party and the Catholic Church. Kernstock protested against being a "swastika activist" and defended himself by saying that he had written a poem "that was aimed at the ideal goals that the swastika activists originally had in mind and with which every good German had to agree."

As a chauvinistic, bloodthirsty lyric poet, he appears in Karl Kraus ' drama The Last Days of Mankind with original quotations from his war poems .

In Austria, numerous streets and squares were named after Kernstock after his death. After the "Anschluss" in 1938, especially the swastika song was by the Nazis used for propaganda. After 1945 it was increasingly forgotten. The naming of streets and squares was partially reversed - often only after lengthy debates. Thus, in 1992 in Vienna- Ottakring the Kernstockplatz in family court , 1993 Ottokar-Kernstock-Straße in Vienna- Penzing in Jägerstätterstraße renamed.

The central Kernstockgasse in Graz, Gries district was signposted as Kurt-Cobain- Alley in an art campaign in April 2014 and provided with a memorial plaque for the musician who played not far from it in 1989 and died 20 years earlier - in 1994. Kurt-Cobain-Gasse has been anchored in Google Maps and OpenStreetMap as the second name of the street to this day (as of January 2017) through user entries . According to a municipal council resolution from 2014, a street name commission under historian Stefan Karner classified Kernstockgasse in March 2018 as one of 20 "highly questionable" designations. In February 2019, the black-blue town hall coalition declared that the streets in question would not be renamed, but that they would install additional explanatory boards and provide more detailed information.

Until the 1980s, one could read on a house in Vienna- Hietzing (13th district), Münichreiterstraße 9: The German poet Ottokar Kernstock once lived in this German house. The memorial plaque was later removed by the house owner.

On May 24, 1914 , a Kernstock parlor was opened in the Hotel Neue Welt , Gloggnitz , in the presence of Kernstock and Hans Wagner-Schönkirch - which still exists today (Hotel Loibl) .

Ottokar Kernstock introduced the name Wechselgau for the area between Hartberg and the Wechsel . The term has not caught on (presumably to distance oneself from the Reichsgauen of National Socialist Germany), but lives in the name of the regional cooperative Lagerhaus Wechselgau reg. GenmbH of RWA Raiffeisen Ware Austria , which emerged from the Wechselgau dairy founded in 1929 by 130 farmers .

During the time of international racism protests, a Kernstock memorial was smeared in Hartberg in mid-June 2020 .