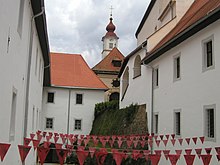 Sankt Lorenzen am Wechsel with 1,454 inhabitants (as of January 1, 2020) is a municipality in the judicial district of Fürstenfeld and in the political district of Hartberg-Fürstenfeld in Styria in Austria .

Sankt Lorenzen am Wechsel is located at the foot of the Wechsel, approx. 17 km north of the district capital Hartberg . The municipality is bounded in the south by the Lafnitz and extends in the north to Niederwechsel ( 1669  m ) on the border to Lower Austria . In addition to the Niederwechsel, there are other peaks of the Wechselmassif on the eastern edge of the municipality : Irrbühel ( 1423  m ), Windhag ( 1395  m ), Lorenzkogel ( 1353  m ) and Hochkogel ( 1314  m ). The municipality is mainly drained by the Vorderen and Hinteren Waldbach, tributaries of the Lafnitz.

The municipality of Sankt Lorenzen am Wechsel consists of three cadastral municipalities :

The current municipal area was already settled in Roman times, as a Roman trade route ran through the area. This is confirmed by burial mounds and wheel furrows.

The settlement of the municipality took place in the 12th and 13th centuries mainly to build fortifications against the Eastern European peoples, as the Austrian eastern border ran in the immediate vicinity. Settlement was promoted especially after the Vorau Abbey was founded in 1163.

The following centuries were marked by natural disasters and armed conflicts in the municipality, as the village was not far from the Hungarian border. In 1349/50, 1599 and 1679/80 the plague raged in Sankt Lorenzen, in 1478 and 1480 swarms of locusts caused a famine. The village was invaded several times by the Hungarians , Turks and Kuruc . Between 1529 and 1533 the Turks devastated the municipality and burned down the parish church. The Festenburg could not be taken. During this time, numerous fortifications were built, which is reflected in the naming of some of the Rotten .

The current parish church was rebuilt after it was destroyed by the Turks in 1684. It was created at the same time as part of the fortification. A little later - at the beginning of the 18th century - the Festenburg came to Vorau Abbey and was converted into a monastery.

Up until 1902 there were no paved roads to Sankt Lorenzen am Wechsel. In that year the construction of a road began, in 1907 the community received its own post office.

During the Second World War , the municipality was again the center of fighting between the Wehrmacht and the Red Army . There are numerous memorials to the victims of the two world wars in the municipality. Thanks to the efforts of the population, the community was able to be quickly rebuilt. 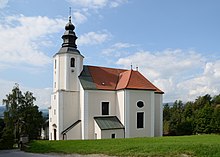 Sankt Lorenzen am Wechsel is away from the main roads. The state road from Rohrbach an der Lafnitz to Sankt Jakob im Walde runs through the south of the municipality . The change road B 54 from Wiener Neustadt to Hartberg is approx. 7 km away. The distance to the south A 2 motorway from Vienna to Graz is approx. 16 km. It can be reached via the Friedberg / Pinggau junction (95).

The community does not have its own railway connection. The nearest train station is in Dechantskirchen about eight kilometers away. It offers access to the Thermenbahn with two-hour regional train connections to Vienna and Hartberg.

The Graz Airport and the airport Wien-Schwechat are 110 km away.

There is a primary school each in Sankt Lorenzen am Wechsel and Festenburg .

The Styrian state government has given the municipality the right to use its own coat of arms with effect from August 1, 1991.

"In a blue shield with eight golden snow crystals in two rows (5: 3) above and a golden ray of sunshine below, a bar-shaped red underlaid golden grate, decorated with lilies at the corners."

The symbol of St. Laurentius, the Roman martyr and parish patron of St. Lorenzen am Wechsel, is rust. Saint Catherine of the church in Festenburg is represented by the lilies on the corners of the grate. The snow crystals in the upper part and the sun in the lower part of the coat of arms represent the change in weather in St. Lorenzen.

Cities and communities in the Hartberg-Fürstenfeld district