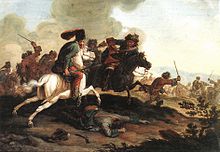 Votive picture from the Kuruc invasion of 1704 - Großsteinbach, Styria

Kuruzen , also Kuruzzen or Kurutzen ( Hungarian kuruczok / kurucok , Sg.kuruc (z) , Slovak kuruci , Sg. kuruc , Romanian curuți , Sg. curuț ), were a group of armed anti-Habsburg insurgents in the Kingdom of Hungary from 1671 to 1711 From the impoverished lower Hungarian nobility and the peasants, they conquered large parts of Hungary from Transylvania in several waves before they were defeated by imperial troops.

The Kuruc the German exclamation recalls "Kruzitürken!", A contraction of, Kuruc and Turks '.

Trigger of the Kuruc uprisings

Even before the Kuruc there were uprisings and revolts in the east of the Habsburg Empire. According to György Dózsa, Stephan Bocskay , Gabriel Bethlen , Peter Császár and Georg I. Rákóczi revolted successively from 1604 to 1645 , mostly with Ottoman support from northern Hungary or Transylvania. All of these riots were put down.

The Peace of Vasvár in 1664, in which Emperor Leopold I left large areas of royal Hungary to the Turks despite a Turkish defeat (1663–1664), outraged many nobles in Hungary against the Habsburgs. It came from 1664-1670 / 71 to the magnate conspiracy , a noble conspiracy in the territory of today's Slovakia, Hungary and Croatia against Habsburg, which was uncovered and smashed.

The conspirators are not called Kuruzen, because the high nobility of Royal Hungary acted here, including Franz Wesselényi , Petar Zrinski , Fran Krsto Frankopan , Franz I. Rákóczi , Stephan II. Thököly . After the military crackdown on Wesselényi's conspiracy by imperial troops in 1670, the imperial government saw its opportunity to take absolutist measures. In the same year, under the direction of Count Johann von Rottal , an investigative committee began its work in Leutschau and was converted into a special court in Pressburg , which summoned over 200 suspicious nobles, including Protestant clerics , in 1671 . Most were released, some were given life sentences, seven were executed, three of them in Pressburg. As early as 1670, many fled en masse to the Principality of Transylvania , an independent Turkish vassal state, or to Hungary, which was directly occupied by the Turks; their possessions were confiscated by the Habsburgs. The families Nádasdy , Zrinski , Thököly , Wesselenyi and others were affected . In addition, the Counter Reformation was strengthened and taxes were raised significantly. Habsburg troops were often deployed to forcibly wrest their churches from the Protestants, which caused various unrest.

The aristocrats who fled in exile , who referred to themselves as bujdosók (Hungarian `` rural refugees ''), were soon joined by soldiers from the anti-Turkish border fortresses, subjects from the cities and the middle class, who were poorly paid and who had been dismissed from the anti-Turkish border fortresses since the end of 1671 because of rationalization measures, in the hope of employment on. Thus, the suppression of the conspiracy was the trigger for the bloody Kuruc uprisings.

Meaning of the term

The origin of the name is partly controversial:

However, after the poor population of the kingdom, originally gathered as Kuruzen who participated in the crusade , rebelled against the nobility in what is now Hungary and southern Slovakia in the revolt of György Dózsa , the Hungarian peasant uprising, in 1514 , the term gained a new meaning. He stood for rebels, insurgents and the like. Immediately after Dózsa's uprising (1514), the term took a back seat and was only taken up again in the 1860s. He then reappeared as kurus , kuroc , kurudsch , meaning robber, bandit.

The term was used in 1671 by Meni , the Beglerbeg Pascha von Eger , to denote the predominantly noble refugees after the magnate conspiracy from the area of ​​Slovakia, which was then the Habsburg area "Royal Hungary". After that, the name quickly became popular and was used in Hungarian, Slovak and Turkish-language texts from 1671 to 1711 as the name for insurgents in Royal Hungary and the northern Grand Duchy of Transylvania. It was the last phase of the anti-Habsburg uprisings that had lasted since 1604 (1604–1711), which, with the exception of the uprising of Francis II Rákóczi, took place almost exclusively in today's Slovakia. Franz II. Rákóczi himself did not use the name, however, and instead of the term Kuruzen, the sources of the time often also used the word die Malcontenten (French: 'dissatisfied', 'insurgent').

In today's history texts, the term Kuruzen is used almost exclusively in this last meaning. The opposite term to Kuruzen has been the labanzen since 1526, more often since 1678 .

During the Rákóczi uprising, the Kuruzzenschanze was built in Styria , Lower Austria and today's Burgenland , a system of palisades and earth walls, the remains of which are now a listed building.

Outline of the uprisings

The Kuruc uprisings are a collective term for the following uprisings:

The period 1671/72–1680 is often incorrectly referred to in German-language literature as the Kuruc Uprising. In 1680 Thököly officially became the Kuruc leader, but de facto already in 1678. The end of the uprising of Emmerich Thököly is again often incorrectly given as 1682 instead of 1687/88. In 1682 an armistice was signed and Thököly became a prince, but the fight with the Kurucs in Upper Hungary (today's Slovakia) continued intensely parallel to the Great Turkish War.

Composition of the insurgents

The Kuruzen were mainly various fled subjects and soldiers who had been released from the Habsburg anti-Turkish border fortresses, but also some nobles, especially those who had fled in 1671 after the magnate conspiracy . In terms of ethnic composition, the majority were Slovaks , Croats and Ruthenians / Ukrainians , but also a great many Magyars . Although mostly Protestant nobles came to the Kuruzen, there were also many Catholics among the insurgents.

Two soldier musicians the Kuruzen with the cone oboe töröksíp and the cylinder drum nagydob .

The first Kuruc campaign began in the spring of 1672 when the Kurucs led by István Petróczy , a Protestant baron, and Michael Teleki , the Chancellor of Transylvania, and supported by the Ottomans, conquered parts of eastern Slovakia and expelled the Catholic priests there. In the summer, the so-called Arwa or Pika uprising took place at the same time, during which Kuruzen, led by Gašpar Pika , advanced into the counties of Liptov and Arwa and, with the help of an uprising of almost the entire local population, captured the important Arwaburg in October . The Kuruzen in what is now eastern Slovakia were defeated by the Habsburg troops in the Battle of Ďurkov in October and those in the Arwa in November. Pika and 25 of his local supporters were executed .

The consequences of the suppression of this first Kuruzen campaign were again devastating. 1672–1678 followed a partisan war of the Kurucs in Upper Hungary, from 1673 under the leadership of the Catholic Paul Wesselényi , from 1675 under the leadership of the Evangelical Chancellor of Transylvania, Michael Teleki . The number of Kuruzen increased steadily, and what is now eastern Slovakia was largely devastated. They were of Transylvania and, since 1677 because of a since 1673 permanent war of France against Austria from France supported. It was a civil war in which the Kuruc fought against imperial troops as well as against pro-Habsburg nobles and cities. Another consequence was the introduction of an eight-member council, consisting of four Hungarians and four Austrians, under Johann Kaspar Amhaben as the authoritarian government in Habsburg Hungary in 1673. Royal Hungary was declared a Habsburg province, the traditional office of the palatine , the highest Function in Royal Hungary, the state parliament and the entire constitution were repealed. In the religious sphere, the failed campaign resulted in a new wave of aggressive persecution of Protestants. In 1673/74 a huge trial against the evangelicals took place at the special court of Pressburg.

Since 1677, the evangelical nobleman Emmerich Thököly , the nephew of István Petróczy, who fled his father Stephan Thököly's Arwa castle in 1670, took part in the Kuruc uprising. In October 1677, Polish troops in the service of France defeated the Habsburg troops in Máramaros County in what is now Romania, which prompted the Kurucs to start a new campaign from Transylvania instead of partisan warfare. This initiated the uprising of Emmerich Thököly (1678–1687). At the time of the “Slovak King” or “Kuruzenkönig”, Thökölys, former border soldiers and numerous dubious persons who behaved worse towards the civilian population than the Turks, who occupied large parts of today's Hungary, formed the core of the Kuruzen. In 1680 the Kurucs conquered all of Upper Hungary and part of Moravia with the exception of well-fortified cities such as Pressburg .

Thököly's successes as well as an imminent war against the Turks forced the emperor to repeal the eight-member government council of 1673 and to convene the Hungarian parliament again in 1681 in Ödenburg . Thököly, supported by the Turks since 1681, was declared King of Upper Hungary, i.e. Slovakia, by the Turks in 1682. His principality (1682–1685) extended in the west to the river Waag . The Thököly uprising, supported by the Turks, coincided in its last phase with the Great Turkish War (1683–1699) between the Habsburgs and the Turks. Many Kuruc fought in the Turkish army and took part in the second Turkish siege of Vienna . After the defeat of the Turks in front of Vienna on September 12, 1683, Thököly's uprising slowly ended. After it became known that the Turks Thököly had imprisoned in 1685 because they regarded him as the cause of the Great Turkish War, the Kuruc lost in the same year its capital Kosice . In 1688, the fortress of Mukachevo in what is now Ukraine, under the leadership of Thököly's wife Helena Zrinska, fell into the hands of the imperial as the last Kuruc fortress.

As a result of the Thököly uprising in 1687 after the " Eperieser Blood Court ", 24 people, the last supporters of Thököly, but also innocent Protestants, were publicly executed. The chairman of the tribunal was General War Commissioner Antonio von Caraffa , who partly invented a conspiracy to get the money of the convicted. The emperor then quickly dissolved the court.

In the following years the dispute about the restoration of the political and social system in Royal Hungary continued, including the uprising of Francis II Rákóczi . In 1697 a new small Kuruc uprising broke out in the town of Eperjes , which then spread to the counties of Sáros and Semplin counties . In the Tokaj area, the issue was specifically about the tax exemption for viticulture. But the army quickly put down the uprising.