Mukachevo ( Ukrainian Мукачево - until 2017 Мукачеве Mukachev ; German  Munkachev ) is a city in the western Ukrainian Oblast of Transcarpathia and the administrative center of Mukachevo Raion .

Mukachevo is located on the edge of the Carpathian Forest at an altitude of 176  m on the central reaches of the Latorica River , 250 km southwest of Lviv . Mukachevo is close to the borders with Poland (200 km), Slovakia (90 km), Hungary (40 km) and Romania (110 km). The most famous sight of the city is the Palanok Castle , which was built in the 14th century.

View over the city

Name and territories of the city

In the Kingdom of Hungary , the city was part of the Bereg County .

The castle of Munkács (today Palanok Castle ), like most castles in this area, was built by the Hungarian King Béla IV in the 13th century after the Mongol invasion to protect the eastern borders of Hungary.

In 1445 the city was declared a royal free city.

The most famous owners of the castle were the Rákóczi family. After the end of the Hungarian uprising against the Habsburgs (1711 Peace of Sathmar ) led by Ferenc II Rákóczi , the Rákóczis lost the castle.

In 1726 the Habsburgs transferred the castle with the town and the surrounding area to the Austrian Schönborn family , who also settled many Germans in Munkács. During this time the city expanded in terms of area and economy.

From the end of the 18th century until 1897 the castle was used as a barracks and prison.

During the Austro-Hungarian monarchy, the city was always referred to by its Hungarian name Munkács.

See also : List of the historical counties of Hungary 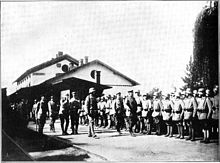 In 1917 the German Kaiser visited the Reserve Jäger Battalion No. 23 at the train station as he was passing through Munkács

In 1919 , the city came to the newly founded Czechoslovakia in connection with the Paris suburb agreements and was now called Mukačevo . In November 1938, the city came back to the Kingdom of Hungary with the First Vienna Arbitral Award , which Hitler dictated . Germany's opponents of the war regarded the arbitration award as null and void from the start.

After the end of the Second World War , the city came to the Soviet Union , when Carpathian Ukraine was added to the Ukrainian Soviet Socialist Republic without questioning the re-established Czechoslovakia .

After the collapse of the Soviet Union , the city became part of the now independent Ukraine.

The city is the hub between the European Union and Eastern Europe . Mukachewo is the location of factories from the beer, wine, tobacco, textile, furniture and food industries. The largest bazaar in the Transcarpathian Province takes place in the city center. 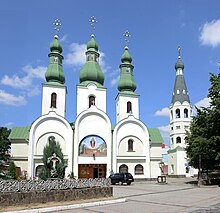 Cathedral of the Mukachevo Diocese of the Ukrainian Orthodox Church in the city center; converted from a former officers' mess

Summers are very warm (an average of 23 to 25 ° C in July) and winters are cold (−3 to −4 ° C in January). Autumn is mostly dry and mild. April is the wettest month with frequent rainfall.

The Latorica River in Mukachevo