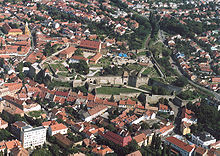 Eger [ ˈɛgɛr ] ( German : Erlau , Latin : Agria , Slovak : Jáger ) is a town with county law in northern Hungary with approx. 56,000 inhabitants. It is one of the oldest cities in Hungary and the county seat of Heves county .

Eger is known for the large wine-growing areas in the area, which, in addition to other types of wine, also produce the well-known red wine Erlauer Stierblut ( Egri bikavér ). There are numerous wine bars and traditional, partly underground, wine cellars in the city . The cityscape is also characterized by baroque buildings, the minaret from the time of Ottoman rule , the medieval castle and the Cathedral of St. John and St. Michael , the second largest in Hungary after the one in Esztergom .

Eger is also known for its thermal springs and thermal baths . The thermal bath is located right next to the large city park. There are pools with different types and temperatures of water. The pool is very busy in summer. Thanks to the thermal springs, Eger has always had a connection to swimming and water sports. The promotion of potential talents begins at school age and is supported by the timetable. Eger has one of the strongest water polo teams in the country and the various swimming teams often achieve high medal positions.

The areas of Eger have been inhabited since the Stone Age. First Germanic and Slavic tribes lived here . Hungarians settled in the 10th century. At the beginning of the 11th century, Eger was named a bishopric by the first Hungarian king, Stephan I. The building erected for this purpose, which did not stand the test of time, stood on today's castle hill, from where the village grew over the years. Eger was an important religious center from the beginning.

In 1241, Eger was completely destroyed by the Golden Horde in the Mongol storm and most of the inhabitants were killed.

During the reign of Matthias Corvinus in the 15th century, the city and all of Hungary experienced a renaissance.

At the time of the Turkish Wars , the city was subject to repeated attacks. In 1552 a small army (less than 2100 roommates and soldiers under the leadership of István Dobó ) was able to defend the city from a huge Ottoman overwhelming power (described in the novel "Egri Csillagok / Stars from Eger " by Géza Gárdonyi ). It was the Turks' first major defeat, and Europe was already relieved.

In 1596, however, Eger was taken and remained under Ottoman rule for 91 years. During this time mosques and baths were built - the minaret still preserved today is considered the northernmost historical building of the Ottomans.

After the Turkish siege of Vienna , the Habsburgs succeeded in counter-attacking the Ottomans from Central Europe. Under the leadership of Charles of Lorraine , Eger was retaken in 1687 and by 1701 the Habsburg armies had conquered almost all of Hungary.

The city experienced its heyday from the middle of the 18th century when many buildings were built in the Baroque style. During the 19th century, the city was ravaged by several fires and epidemics ( cholera ). In 1804 the city was named the seat of the archbishop .

Eger consists of 20 districts. Almagyar is the most elegant part of the city with some buildings of the Eszterházy University. The northernmost district of Almár is home to weekend houses. Belváros (inner city) is the Baroque district with the famous Eszterházy University. The Berva housing estate was built for the area's industrial workers. Cifra hóstya is north of the center, with a lot of narrow streets. Érsekkert (Archbishop's Garden) is the city's largest park with indoor swimming pools and sports facilities.

Until the last century Felnémet was a suburb of Eger, then it was attached to the city. The district has retained its village appearance. Felsőváros (Upper Town) consists mainly of log houses. Károlyváros (Karlstadt) is the largest district and can be found west of the center. The most famous part of the city with many wine cellars is Szépasszonyvölgy (Schönfrauental) . Legend has it that the Turkish victims of the siege in 1552 were buried in Tetemvár (mortuary castle) .

Cities and municipalities in the small area of ​​Eger