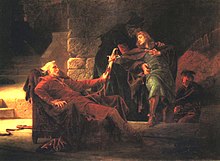 Stephan II. Farewell to his son Emmerich before his flight from the Arwaburg (historical painting by Bertalan Székely , 1875)

Stephan II. Thököly was born on February 8, 1623 as the son of Stephan I. Thököly and his second wife Katharina. Thurzó was born in Kesmark. Due to his maternal origin, he achieved a higher social position than the other members of his gender. After the death of his grandfather, the palatine Georg Thurzó , he was appointed administrator of the family estates in Arwa county in 1653 and at the same time was appointed hereditary chief clan of Arwa county. In 1654 he was raised to the rank of count by Emperor Leopold I. In the meantime he managed a huge family fortune, he owned domains in Kesmark, Rosenberg , Likawa and Arwa. Through his marriage on November 14, 1651 with the 14-year-old wealthy Mária Gyulaffy (* 1637, † November 19, 1659) from Transylvania , further goods were added to Transylvania. Mária Gyulaffy was the granddaughter of the Prince of Transylvania Stephan Bethlen von Iktar (* 1582, † 1648).

Stephan II was a close friend of Franz Wesselényi (* 1605, † 1667) and Franz III. Nádasdy (* 1622, † 1671) and supported the Wesselényi magnate conspiracy with huge sums of money. When the conspiracy was exposed, Istvan II was at his castle in Arwa. When it became clear that he was also involved in the conspiracy, the castle was besieged from November 1670 by imperial troops under Field Marshal Sigbert Heister (* 1646, † 1718). After two weeks, the castle defenders were forced to give up the castle on December 10, 1670 and surrendered to the imperial troops. Stephan II did not experience this task any more, as he died in the castle during the siege on December 4th - whether as a result of illness or suicide , that could not be clarified. After the imperial troops entered the castle, his body remained unburied for nine months. The family members wished that the deceased should be transferred to the family crypt in Kesmark, but this request was not granted.

Stephan II. Thököly's only son Imre (Emmerich) managed (allegedly) to leave Arwa Castle unscathed during the siege by the imperial ones via a secret passage. According to other sources, on behalf of his father, he was brought by his followers Stephan Boczko and Daniel Günther von Lilienfeld from the Evangelical College in Eperjes, founded by Stephan II in 1667, via Chrust Castle (now Ukraine ) to Transylvania to Prince Michael I Apaffi . His three daughters, who were also in the castle during the siege, were first imprisoned, but later released.

Because of his involvement in the conspiracy, Stephan II was declared to have lost all of his property in 1671. The castle and the entire property (furniture, weapons, pictures, art objects, etc.) of Stephen II were confiscated by the ruling house; According to old chronicles, nineteen wagonloads of goods are said to have been transported from the castle to Vienna in 1670 and 1671 .

Offspring The marriage to the only fourteen-year-old Mária Gyulaffy had six children. After the death of his wife, he no longer married, but raised the four living children (three girls and one boy) himself:

Even after the death of Stephen II, the Lutheran Thökölys had no rest. In the course of the Counter-Reformation , the Church of the Holy Cross in Kesmark - in which the family's hereditary burial was located - was   re-Catholicized . By order of the Zipser chapter (slow. Spišská kapitula) the vault of the Thokoly was broken pietätlos 1731, the bodies were thrown out of the tin coffins and scattered throughout the crypt, then thrown without reburial to the cemetery. The jewelry found was stolen and the pewter coffins were sold to metal dealers.