Wenigzell with 1387 inhabitants (as of January 1, 2020) is a municipality in Eastern Styria , Austria . It is located in the judicial district of Fürstenfeld and in the political district of Hartberg-Fürstenfeld .

Wenigzell is located in the mountainous region of Joglland in northeast Styria.

Wenigzell's origins go back to the year 1141: At that time, Count Wolfrad von Treffen from the Count of Veringen came into the possession of the “100 Huben” in barter with the Archbishop of Salzburg . He used settlers from his Swabian homeland for colonization . Nothing of these original settlers has survived (e.g. in the name), as they were soon overlaid by settlers from the Pitten area. The names of the cadastral communities also go back to (Bavarian) family names of the last-mentioned settlers from the Pitten area.

Presumably, Count Wolfrad von Treffen also gave the Vorau canon monastery a forest hill, on which it built a chapel of St. Margaret , mentioned in 1209 for the first time, and a farmyard. This is where the name comes from, which means something like "small courtyard". Around the chapel of St. Margaret, there was also a village, of which we have evidence as early as 1200. Perhaps as early as 1220 Wenigzell became an independent parish , as we know the first pastor named Heinrich around 1250.

From the time of the Reformation , we know that the Little Zeller were loyal to the old faith, which probably also to the good pastoral care by the Vorauer canons is due. Presumably that was after the New Collegiate Church of Vorau (1660-1662 by Domenico Sciassia rebuilt) and the parish church of Wenigzell.

In 1692, Pastor Georg Tentius obtained it from Pope Innocent XII through Vorau Provost Phillip Leisl . confirmation of patrician brotherhood . This made Wenigzell a much-visited place of pilgrimage to Saint Patrizius. The influx of pilgrims became so strong that on Patrician Day , March 17, 1716, a pilgrim was crushed in the church. In 1721 the important baroque painter Johann Cyriak Hackhofer frescoed the five initial niches around the church with the secrets of the Sorrowful Rosary .

As a result of the patrician day in 1716, the decision was made to rebuild the parish church, which was carried out by Andreas Straßgietl from 1733 to 1735 . The 40 m long church was given a rich baroque interior: the walls were covered with fine stucco in which cartouches for frescoes by Joseph Georg Mayr were embedded. In addition, the church received five altars: the high altar in honor of St. Margaret and the four side altars of St. Mary and St. Joseph and St. Patrizius and St. Leonhard . In the course of Josephinism in 1783 the votive pictures were removed from the church and pilgrimages were also banned. In the Biedermeier period, however, the pilgrimage recovered.

In the last days of the war in April 1945, the village of Wenigzell fell victim to the war by mistake. In an attack by the Russians, they wanted to eliminate a suspected arsenal there, which was actually stationed in nearby Fischbach . The church burned down and Wenigzell was destroyed, apart from a few isolated houses. Reconstruction began in 1946: the church got a new roof, windows were installed, new bells were purchased and the church was refurbished. The equipment was added until 1992.

After the war, Wenigzell became a popular summer resort , especially for the Viennese. There are various themed hiking trails and a barefoot park , a local museum and the newly built Jogllandoase , an indoor pool with a wellness and sauna area.

The population of Wenigzell is almost entirely, namely 97.8% Roman Catholic ; 0.6% are Protestant , the confession of just as many is unknown. 0.7% of the population have no religious beliefs.

Wenigzell is the seat of a Roman Catholic parish. 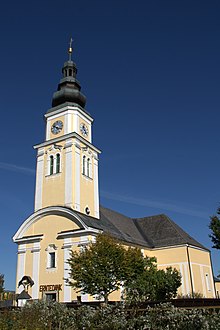 Herbert Berger has been the mayor since April 27, 2015, taking over from Herbert Hofer. Berger was elected during the constituent meeting of the municipal council and sworn in by district captain Max Wiesenhofer.

The municipal coat of arms was awarded in 1981.
Blazon : “In red, diagonally to the right a row of golden pearls, accompanied by a golden griffin foot at the top, accompanied by a golden stag pole below.”
The row of pearls makes the Greek name of St. Margaret (parish patroness) in the “small cell” understandable. The griffin foot expresses the close connection with the Vorau pen. The stag bar indicates the origin of the town's founder - the stag bar was borrowed from the coat of arms of his relatives, the Alemannic Count Isny-Veringen.

Cities and communities in the Hartberg-Fürstenfeld district