Fischbach seen from the Teufelstein

The Teufelstein seen from Fischbach

Fischbach is a municipality with 1524 inhabitants (as of January 1, 2020) in the district of Weiz . It is located in the Austrian state of Styria . On February 27, 2003, the municipality of Fischbach was officially recognized by the Styrian state government as a high-altitude health resort . At 1050 meters above sea level, the place is the highest place in Eastern Styria .

Fischbach is a place in the Fischbach Alps and is about twelve kilometers northwest of the market town of Birkfeld and about 27 km as the crow flies from the district capital Weiz . The maximum north-south extension as well as the maximum east-west extension are each around nine kilometers. The municipality covers an area of ​​61.57 km². The Teufelstein is the highest point in the municipality with its 1498  m . The lowest point in the municipality is in the Feistritztal at 650 m.

The Feistritz forms part of the eastern border and the Fischbacher Wald prevents a view from the town center into the valley. In the south, the Hinterleiten forest is cut through by the Waisenbach. In the west runs the ridge of the Fischbacher Alps , over which the saddle " Auf der Schanz " leads.

Structure of the municipal area

The Fischbach community consists of three localities or cadastral communities (population: as of January 1, 2020; area: as of December 31, 2017):

From the first mention to the 19th century

The name Fischbach was first mentioned in 1295 in a land register belonging to the diocese of Seckau . The village developed along the road which, in addition to agriculture, represented an important additional source of income for the residents. The main business of the Fischbacher consisted in the "prestressing strips". The road was often laid out in steep places, so that the heavily loaded wagons could not get over the mountain without outside help. Today the name "Weaning" still reminds of where the harnessed horses were lowered.

Peter Rosegger's connection to Fischbach during the 19th century

In the second half of the 19th century, Peter Rosegger wrote several stories about his childhood and adolescent experiences in Fischbach, which shed light on life in the Waldheimat region and also in Fischbach at that time. Examples are the texts "The great forest", "Kirchweih zu Fischbach", "The mission to Fischbach" and "The journey to the famous Teufelsfels".

Fischbach as a theater of war in World War II

During the Second World War , an American Lockheed P-38 escort fighter was shot down over Fischbach on July 26, 1944 . The pilot was able to get out of the plane and save himself with the parachute.

Towards the end of the war, Fischbach was occupied by the Russians for the first time from April 13th to 18th, 1945. The community's book of the dead shows that 14 civilians (including one woman) were killed in fighting between April 14 and 18. There were repeated shootings of suspects. A local resident who had been on convalescent leave since the night of the Russian invasion survived his execution seriously injured because the projectile shot in the neck passed his carotid artery and spine. According to the Fischbacher community report, 70 women and girls were raped in these days.

A small group of Volkssturm men had gathered on the southern slope of the Teufelstein above the Gmein and on April 14, 1945 opened fire against the Russians in Fischbacher Ort. Many houses and farms fell victim to this shelling. Records confirm that the rectory was also on fire on April 17, 1945. On April 18, 1945 the Russian occupiers left the village due to a German counter-attack in the entire Joglland . On May 8, 1945, the day of the unconditional surrender of the German armed forces , the Russians occupied Fischbach again with around 400 men.

From the Second World War to the present

After the Second World War and the period of reconstruction, the club life accelerated in Fischbach and created a strong relationship between guests and locals through events. In the 1960s, Fischbach developed into a tourist destination, as the standards of the existing ski lifts and the safe snow conditions in winter, as well as the fresh air and leisure activities that had become attractive in summer, such as the mini golf course (built in 1967) or the tennis court, which was later opened ( since 1980) attracted many guests to Fischbach. In the first years of the 21st century, the Fischbach recreational area was laid out as part of the village development project, the place was officially recognized as a high altitude health resort and the thoroughfare was renovated. 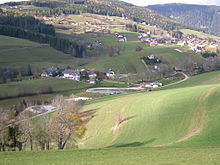 In 1953 the Fischbach tourist office was founded and the local cinema (today converted into a “ supervised living ” house) was built. In 1954, school ski courses began to be held and in 1958 the existing extinguishing basin was converted into an outdoor pool (today the culture pavilion). At the end of the 1970s, the number of visitors began to decline and despite various countermeasures, it was not possible to match the number of overnight stays at the time.

With the Fischbacher Alpen Tour and the "Fisch-BIKER-Tour", Fischbach has two tours for mountain bikers, some of which are very demanding. The Feistritztal cycle path touches the municipality of Fischbach. The Fischbach recreational area, which opened in 2001, offers many possibilities: A small, artificially created pond offers swimming in summer and is used as an ice rink in winter . There is also a mini golf and beach volleyball court in the leisure area. Due to the extensive network of trails in Peter Rosegger's Waldheimat , the area around Fischbach offers many hiking opportunities. In winter, several cross-country skiing trails, two smaller ski lifts (one on Schanzsattel, one in Falkenstein- Stadlhof ), ice rink, curling rink (also used as an asphalt track in summer) can be used for tourism.

In 2006 the Fischbach community joined the supra-regional § 4/3 Tourism Association Joglland .

The parish council consists of three members and will be composed as follows after the 2015 election:

The municipal office has been located in the new building in Fischbach 11a, which was built between 1979 and 1982, since 1982. It includes the following premises: the office, the mayor's room, the booking room, the conference room (this is also where civil weddings are held) and the tourist office.

On August 1, 1970, the municipality of Fischbach was granted the right to use the municipal coat of arms by the Styrian state government .
Blazon : "In a silver shield, a two-pointed mountain with four spruce trees crossed by a silver bar covered with a blue fish."

Cities and municipalities in the district of Weiz