Sinabelkirchen is a market town with 4279 inhabitants (as of January 1, 2020) in the Styrian district of Weiz .

The market town of Sinabelkirchen comprises ten cadastral communities on an area of ​​37.19 km² and is divided into nine localities (in brackets: area as of December 31, 2019 or population as of January 1, 2020):

The oldest traces of human settlement are the Roman finds in Gnies and Obergroßau. A verifiable clearing of the Sinabelkirchen soil did not take place until the 12th century. Although place and river names suggest that the Slavs have already settled here.

Lexer writes about the etymology of the word Sinabelkirchen : sin-wel, sine-wel, sinbel means completely round . The syllable WEL lies still in the word wheel , the wheel. It is also noteworthy that, in the vernacular of the place always as Siniwelt was called and will. The name completely round is certainly not meant to refer to the existing church, the origin rather points to a former Romanesque church or to the pre-Christian times of this place.

It is not clear from what time and where the name Unterrettenbach comes from. However, it is etymologically certain that the syllable -retten- comes from the Old High German riutan and means to make arable , the well-known word clearing comes from the same root.

From the 15th to the beginning of the 18th century it was always the peoples from the east who threatened the livelihood and culture of the population. 1418 the Hungarians , in 1529 the Turks , 1605, the outlaws , Turks and Avars and 1704 the Kuruc devastated the country, burned houses and villages to the ground, abducted and killed the man.

Disease, especially the plague , threatened people's lives. We can still find the plague crosses in Unterrettenbach, Egelsdorf, Gnies and Fünfing as evidence .

In 1782 locusts destroyed the municipality and in 1805 the population suffered under the occupation of the French . In 1848 the peasant liberation brought a new situation for the peasants, which not only had a positive effect. But the First World War , the turbulent interwar period and above all the Second World War brought hardship, misery and existential problems to the population.

Although there had been a lively religious life for centuries, the parish was only founded in 1729. The foundation of the parish was preceded by long disputes with the main parish of Pischelsdorf . In 1551 the foundation stone for the construction of today's church was laid. The original church was consecrated to St. Patrizius, today St. Bartholomew is the parish patron . In addition to the Gnies branch church, there are numerous chapels, wayside shrines and wayside crosses throughout the municipality.

Parish church and rectory were completely renovated and rebuilt in 2009/10.

For some years now, the parish has not had its own pastor, but is looked after by the parish of Gleisdorf . 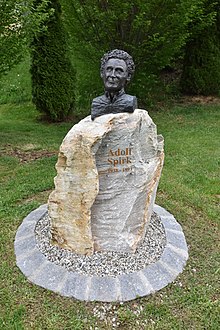 In recent years Sinabelkirchen, especially Untergroßau, has developed into a location for regional and national companies.

The exact date when the school was founded is not known. In the 1737 baptismal register , for example, we find that the head teacher Augustin Hertle had a child who was not baptized. Before 1737, Johann Hierzer was mentioned as a teacher. In 1807 86 boys and 70 girls attended the one-class school. In 1870 the school was divided into two classes (314 students), three classes in 1874, five classes in 1895, six classes in 1912 (450 students) and finally nine classes in 1934. The accommodation of the classes was always very difficult because the buildings available were too small. In 1961 a new school building was moved to meet the requirements of the time. In 1997 the elementary school had nine classes and the secondary school, which opened in 1962, also had nine classes. The New Middle School is a notebook main school with eleven notebook classes and thus one of the largest in the German-speaking area. The current director Anton Tautter launched this project in 2001.

An annual kindergarten has existed since 1980 (two groups) and in 1998 had four groups.

Cities and municipalities in the district of Weiz