The Augustinian Canons of Vorau is located in northeast Styria ( Austria ), in the market town of Vorau .

The monastery was founded by Margrave Ottokar III. von Traungau back in 1163, who handed over his possessions in north-eastern Styria between Wechsel and Masenberg to the Archbishop of Salzburg. The first Augustinian canons came from Salzburg and Seckau . After the monastery was destroyed in 1237, it was quickly rebuilt. King Rudolf I of Habsburg issued a letter of protection to the monastery in 1277 . Another fire devastated the monastery building in 1384. In 1452 Pope Nicholas V allowed the provost of Vorau to carry the pontificals during solemn liturgical acts . The Roman-German Emperor Friedrich III. gave the monastery its current coat of arms in 1453 and granted permission to set up an armory . Because of the continuing danger from the Turks, Provost Leonhard von Horn arranged for the monastery to be converted into a monastery castle with a moat , defensive wall and drawbridge .

The plague , which raged from 1503 to 1505 , killed 800 people in the Vorau parish . Emperor Maximilian I gave the monastery the district court with stick and gallows . After Propst Geyer's death in 1542, the monastery threatened to go out during the Reformation , as there was only one canon left. The existential crisis was not ended until 1544 with the appointment of a new provost. Another plague epidemic claimed 611 deaths in Vorau in 1598. Extensive new buildings were erected by 1635. Provost Matthias Singer set up a pharmacy for the population in 1651 . The collegiate church was rebuilt from 1660 to 1662 , the old prelature was demolished in the course of the new construction of the west and north wing in 1727. In 1736 the Canon Monastery reached the highest membership level in its history with 46 canons. In 1778 the monastery established a secondary school . A grammar school was run from 1812 to 1817 and a private grammar school with a boys' choir institute from 1839 to 1843. The fortress walls were torn down in 1844 and the moat was partially filled in, which meant that the monastery lost its castle character.

The pen has been supplied with electricity since 1920. Due to a financial emergency in the wake of the global economic crisis , numerous art treasures had to be sold in 1924.

Immediately after the " Anschluss of Austria " in 1938, the Vorau Canon Monastery did not experience any reprisals, but in autumn 1938 the Nazi regime's approach changed massively. After the confiscation on April 19, 1940, the Vorau Abbey was renamed "Burg Vorau". The canons had to leave the monastery, which was now administered under Nazi rule. Apart from three canons who were allowed to remain in the village, all were expelled from the district and district. They had to find new accommodation for themselves. On October 4, 1940, the entire property of the monastery was confiscated in favor of the "German Reich". That was the first time since it was founded in 1163 that the monastery was abolished. It could not avoid the "harassment of the rulers of the 'Third Reich'"; A NAPOLA was set up in the former monastery .

Attacks on girls and boys by the canons were cited as the reason for the changes made by the Nazi rulers. The fact that an advance detachment from the Vienna Theresianum (also an NPEA) came to Vorau on May 7, 1940 shows how hastily the party members responsible had to set up a NAPOLA in Vorau. In several trains, which can also be described as classes, young boys were brought up in the spirit of National Socialism . Already from June 30th to July 9th 1940 the annual maneuver of the various educational institutions of the " Ostmark " was held in Vorau and the surrounding area. When the front approached, NAPOLA students and managers left the pen “in a hurry” at the beginning of April 1945.

The temporary head of NAPOLA in Vorau, a very purpose-oriented man from Mecklenburg, pursued the plan to transform the artistically richly furnished collegiate church into a school and sports hall. The fact that this idea was never realized is seen as a merit of Walter von Semetkowski , the then state curator .

On April 24th, parts of the Vorau monastery burned down. Soviet low-flying planes bombed the area - neither the monastery nor the market were spared. A lack of water and desolate fire extinguishers prevented the four-day fire from being tackled quickly. The farm building and some towers in particular were badly damaged.

Many incunabula, documents and books were "moved" from the library during the Nazi regime. Valuable art objects were stored in various buildings in Graz. The restitution after the end of the war was carried out on a case-by-case basis and proved to be time-consuming and difficult. Some objects from the monastery were only found decades later in other museums, others have not been found until today.

Vorau pen from the air

On May 27, 1945, the Canons from the Congregation of the Austrian Augustinian Canons returned to the destroyed monastery and began with the reconstruction, which was not completed until the end of the 1960s. From 1981 to 1987 all monastery buildings were renovated, from 1995 to 1997 an extension for the administration building took place.

Vorau Abbey today has around 3,400 hectares of land, of which 2,900 hectares are forest. This is how it generates most of its income. The Vorau Abbey has so far been able to cope with its economic tasks largely without public funds.

The Vorau Abbey has splendid furnishings , especially from the high baroque period . 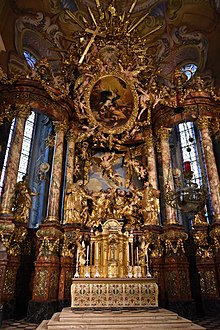 High altar of the collegiate church

The collegiate church was built between 1660 and 1662 according to plans by Domenico Sciassia . From 1700 it was redesigned by the imperial engineer Matthias Steinl in the style of the Viennese high baroque. Steinl designed the pulpit, which deals with the teaching activities of Jesus of Nazareth and the high altar which depicts the ascension of Mary (mother of Jesus) . The collegiate church has been the parish church of the Vorau parish since 1783. 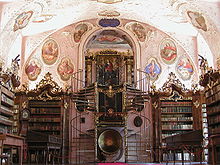 The well-preserved library of the monastery is particularly important . The library hall, completed in 1731, houses around 17,500 volumes. Overall, however, the Vorau Abbey owns over 40,000 volumes, including 415 manuscripts and 206 incunabula . These include important manuscripts such as the Vorau Gospels from the 12th century, the Vorauer Volksbibel written in 1467 (in Austrian Bastarda) with over 550 miniatures and the Vorau manuscript , the most extensive and most important of the old collective manuscripts with sacred early Middle High German poetry , many of which are nowhere else passed down. This also contains the Imperial Chronicle - a poetic imperial story from Julius Caesar to the Second Crusade.

Ceiling painting of the sacristy

The sacristy is considered the artistic pearl of the monastery, which owes its painterly decoration, which was preserved in the years 1715–1716, to the monastery painter Johann Cyriak Hackhofer and which can be considered his masterpiece. The painful rosary is depicted on three walls in simple illusionistic frames . On the fourth wall he depicted a fall from hell . Surrounded by flames, diabolical figures and other infernal monsters, it shows the fall of personified human vices such as greed, fornication, arrogance, alcoholism, slander, etc. In the middle of the eastern, strongly illuminated part of the ceiling Christ enthroned on a rainbow. The saints of the old and new covenants and adoring angels crowd around him.

The monastery has been running an education center since 1977. On the one hand, this offers religious events and seminars lasting several days; on the other hand, it rents the seminar rooms with space for up to 200 people. The education center is headed by Provost Gerhard Rechberger.