The Lords and Counts of Stubenberg come from Stubenberg in Styria . Members of the family were hereditary members of the Hungarian magnate house . They held high offices and a. as governors , bishops, hereditary gunners and treasurers .

The family is originally from Pitten . The progenitor of the family was Otto von Stubenberg, who built Stubenberg Castle on the Kögerl above Stubenberg (Styria) around 1160 . Otto's second son Ulrich took part in the Damiette crusade and fell near Damiette in 1218 . According to Loosert, Otto's grandfather had already participated in the First Crusade and married the sister of a Habsburg comrade in arms.

As a replacement, the Stubenbergers built Neuhaus Castle around 1350 (see below) and also redesigned an old Meierhof on the eastern edge of Stubenberg as the administrative seat for the surrounding estates, the so-called Stubenberg Castle . Two hundred years later, the Stubenbergs took part again in an uprising against the sovereign, this time on the side of the Hungarian King Matthias Corvinus . The result was similar to before, the victorious Emperor Friedrich III. However, this time the fiefdom of the headquarters was finally withdrawn and handed over to the previous Drachsler family.

In the 13th century, the Stubenbergs built the Oberkapfenberg Castle, which then became the residence and administrative center of their rule for over four centuries. The family played an important role in the takeover of government by Rudolf von Habsburg , but also took part in the 1292 revolt of the Landsberg League against Rudolf's successor, Duke Albrecht I.

Oberkapfenberg Castle was expanded into a Renaissance fortress around 1550. After the Counts of Stubenberg moved their residence to Wieden an der Mürz Castle in 1739, the castle stood empty and fell into ruin. It was not until 1953 that the family began to rebuild into a castle hotel, including the ruins of the old castle. But in 1985 the tenant went bankrupt and the castle stood empty again and began to deteriorate, which is why it was sold to the municipality of Kapfenberg in 1992 - after more than 700 years. 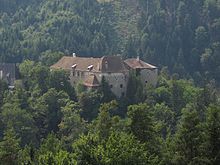 Also Gutenberg Castle , which on a projecting rock at the Raabklamm in Gutenberg Stenzengreith stands, came in 1286 or 1288 in the possession of Stubenberg. A two-storey outer bailey was added to the oldest component from the 12th century in 1490, which was secured by two neck trenches; the outer trench is now bridged, the inner trench was filled in. The chapel was dedicated to St. Pankraz consecrated. From 1567 the castle was rebuilt and expanded. The result was an irregular four-storey building complex with an almost pentagonal floor plan and also a pentagonal courtyard. Gutenberg Castle is still inhabited by the Stubenberg family and is the family seat.

Neuhaus Castle in Stubenberg am See

Around the middle of the 14th century, the Lords of Stubenberg built Neuhaus Castle not far from their ancestral home near Stubenberg . In 1375 the "New House" with Hans von Neuhaus was first mentioned as a nobility seat. Neuhaus Castle was mostly managed by Stubenberg servants. In 1455, Hans Drachsler, previously Stubenberg administrator on Kapfenberg, is mentioned as the new owner. This castle also later fell into ruin and, like Oberkapfenberg, has only recently been reconstructed.

After leaving Oberkapfenberg Castle, the branch located there moved to Wieden Castle in Kapfenberg in 1739 . As early as 1431 there was a manorial court here, which served as a collection point for the grain toe and other taxes of the peasant subjects. Wolf von Stubenberg, who died in 1668, is considered to be the builder of the first castle-like building. Georg Graf Stubenberg had Wieden Castle built in its current form after 1739 as a two-storey four-wing building with courtyard arcades and sgraffito decorations. The construction took place at the time when the Oberkapfenberg Castle had become dilapidated and the administration was relocated to the valley. The district court also moved here from the castle. Subjects in 66 villages in Upper Styria belonged to the dominion of Wieden-Oberkapfenberg. In 1750, Empress Maria Theresa accepted homage from the Styrian nobility in the palace. In 1782 Pope Pius VI stayed overnight . on his trip to Vienna here. In 1952, Count Josef von Stubenberg sold the already neglected castle.

Stubegg Castle in Arzberg was built in the 14th century by the Lords of Stubenberg. For a long time it was the center of a manorial rule. In the 18th century, the rule was transferred to Gutenberg and Stubegg Castle was left to decay. In the neighboring Passail there was also a castle that was lost today and which was inherited by the Stubenberger. Under the pulpit of the parish church of St. Veit in Passail there is a family crypt. There is a tombstone of Hans von Stubenberg from 1400.

Wurmberg Castle (today Vurberk) in Lower Styria (in today's Slovenia), which is located on the road from Pettau ( Ptuj ) to Marburg ( Maribor ), came to her husband Leutold von Stubenberg through Agnes von Pettau, after her brother, the last of his sex, died in 1438. The descendants remained in the possession of Wurmberg until 1616. The lap was bombed out in 1945 and remains in ruins to this day. Ebensfeld (today Groblje near Domžale ) also belonged to the property .

In the 16th century, members of the family, which was divided into the Kapfenberg and Wurmberg lines, accepted the Protestant creed. Wolfgang von Stubenberg († 1597) and his only surviving son Georg von Stubenberg (* 1560 † 1630) nevertheless had close contacts to the court of the Catholic Archduke Karl II († 1590), his son Ferdinand and the emperors Rudolf II . and Matthias , to whom they lent a lot of money.

In 1691 Georg von Stubenberg built the Stubenberg Palace in Hans-Sachs-Gasse in Graz , which was badly damaged in World War II . In 1614 Georg von Stubenberg, whose daughter Anne (* 1594, † 1624) was married to Georg Christoph von Losenstein , took over the Schallaburg in Lower Austria from his heavily indebted son-in-law , which came into the possession of Johann Wilhelm von Stubenberg from 1641 and from him in 1660 was sold.

When Emperor Ferdinand II took office in 1619, the persecution of Protestants in Inner Austria and Styria intensified. 1628 all Protestant nobles was banned in Styria possession of goods, if they refused to Catholicism convert . Some members of the Stubenberg family then became Catholic and took over the Styrian goods from those who had to emigrate as Protestants. With the takeover, they contractually undertook to provide financial security for the emigrants, their descendants or surviving wives in emigration. Over the years, this situation led to a large number of lawsuits in the Austrian hereditary lands.

After Josef Felix Adolf Graf von Stubenberg, who was born in 1824, was only one male ancestor, the old line threatened to die out. However, he had four male descendants from which the three lines of the family that still exist today branched out: the Gutenberg line, the Gleichenberg line and the Lower Austrian line.

The following Stubenbergers served the emperor as governors:

Neustadt Castle on the Mettau

Wolfgang von Stubenberg acquired the town and lordship of Neustadt an der Mettau in Eastern Bohemia from Johann von Pernstein in 1548 and had the castle rebuilt into a Renaissance palace. The layout of the splendid Renaissance town square, which has remained largely unchanged, also goes back to the Stubenberg family. In 1568 Wolf von Stubenberg and his sons were appointed Bohemian country people "for ever and ever". The owners of the Neustadt estate were:

As a Protestant, Georg von Stubenberg was able to acquire the Geiersberg rule in Bohemia in 1601, before the persecution of Protestants . He bequeathed it to his only grandson Wolf Georg von Losenstein in 1629 when he was forced to emigrate. This was the son of his only daughter Anne († 1624), who had married the Catholic Georg Christoph Herr von Losenstein († 1622). In 1877 the rulership returned to the Stubenberg family when Count Josef Felix Adolf von Stubenberg from Graz married Countess Anna von Nimptsch , heiress von Geiersberg . After her death in 1916, she was followed by her son Karl, who died in 1928. Geiersberg / Kyšperk Castle stayed with his descendants until it was expropriated in 1945.

In 1628, Emperor Ferdinand II, who was also Prince of Styria, issued a decree forbidding all Protestant nobles to stay and own property in the Prince's hereditary lands. You have been asked to convert or leave the country. Some Protestant Stubenbergers converted and remained as owners of the goods in Styria, others left Styria and moved to Saxony (Pirna, Dresden) and the Free Imperial Cities of Nuremberg and Regensburg.

Among the emigrants was the Protestant Stubenberger, Georg the Elderly Herr auf Kapfenberg (* 1560), who was highly regarded in Styria. He left his homeland in 1629 and moved with his second wife Amalia from Liechtenstein to Regensburg, where he died shortly afterwards in April 1630 and was buried with an epitaph and a tombstone in the Petersfriedhof. The Petersfriedhof with all the monuments was destroyed in 1632 after the occupation of the city by Bavarian troops during the construction of fortifications. The grave slab of Georg v. Stubenberg was probably salvaged by his wife Amalia and was temporarily stored in the churchyard of the Holy Trinity Church, which was then just completed . Today the grave slab can be found in the ambassadors cemetery next to this church, now known as the Trinity Church, in front of the baroque Stubenberg epitaph. The inscription on the grave slab was documented in 1758 and has survived. Rudolf Wilhelm von Stubenberg, who emigrated to Regensburg with his mother and wife in 1663, had a Stubenberg family grave built in 1669 after his mother Felicitas Dorothea died in 1667 and his wife Maximiliane died in 1668. Rudolf Wilhelm von Stubenberg also had the remains of his father Johann Wilhelm von Stubenberg, who died in Vienna in 1663, reburied in Regensburg. After his own death he was buried in this tomb in 1677. In the epitaph's inscription, his father, mother and first wife are extensively honored with well-chosen words. His second wife Anna Juliane zu Dhaun-Kyrburg moved with her children to Dresden, where she died in 1721.

Georg von Stubenberg's widow, Amalia (1593–1664), moved to Nuremberg, where other members of the Wurmberg line of the Stubenberg lived. After 1644, she took up an apartment there on the Oberbürg , which she had received as a pledge from the Khevenhüller , also Protestant exiles . She dedicated her life to charity and died in 1664. Other Stubenberger who lived in Nuremberg were:

They were buried in the Stubenberg crypt of the Bartholomäus Church. 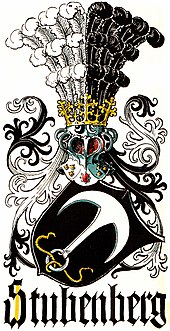 Blazon : The Stubenberg family coat of arms shows a silver wolf scythe in black, with the pigtail of Agnes von Stubenberg pulled through its downward-facing ring. On the crowned helmet are two tufts of ostrich feathers, silver hanging to the right and black to the left. The helmet covers are black and silver.