Structure of the book of arms 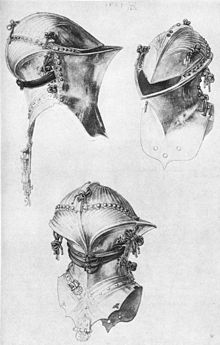 The helmet preferred in the coat of arms drawings of the older part is the stech helmet .

The older part of the book of arms contains coats of arms mainly from the following regions:

In the younger part, there are more coats of arms from Switzerland .

The accuracy of detail and the artistic design value, especially of the older late Gothic coat of arms representations characterize this book of arms. The helmet covers are shown in elaborate draperies . The realistic to exaggerated figurative representations are also remarkable. One speaks here of drolleries , which are also known from the history of playing cards . The coats of arms of the late period are partly only sketchy or exist as rough preliminary drawings and thus soften the impression of a self-contained representation. Due to an interim renewal of the binding, the original sequence of the coats of arms was disrupted.

A paleographic analysis shows that the late Gothic captions of the older part are only present in remnants, as the leaves were later trimmed at the top and bottom. The coat of arms inscriptions from the 15th century are partially preserved on pages 452 to 475 above and were originally the wapen furen (family name) or dis wapen furent die (family name) . The old names of the regions at the bottom are still preserved on many of the sheets. In the early 17th century - apparently in connection with the trimming of the leaves - new inscriptions were added to the upper part of the picture cartouches, which also continue over the younger part of the volume. In the 17th century the pages were counted with Arabic numerals and finally an alphabetical register was attached, the paper of which can be dated to the time around 1693 through watermark analysis. With the exception of small handwritten additions, the Codex is essentially in the state it was in around 1700.