This article deals with the town in Styria, the village in Carinthia see Leoben (municipality Krems in Carinthia) .

Leoben [ leˈoːbn̩ ] is a municipality in the Austrian state of Styria and with 24,471 inhabitants (as of January 1, 2020) it is the second largest city after the provincial capital Graz . Leoben is the seat of the district and regional court of Leoben and the district authority of the district of the same name , and the city also houses a branch of the South Mining Authority. The city has a long tradition in mining and metallurgy , has one of the most important locations of the Austrian iron and steel industry with a Voestalpine plant in the Donawitz district, is the center of Upper Styria's industrial region and is the seat of the Montan University .

Leoben is located in the middle Murtal , around eight kilometers east of Sankt Michael in Obersteiermark and 15 kilometers west of Bruck an der Mur . The old town center was founded in a loop of the river ("Murschleife") just below the mouth of the Vordernberger Brook coming from the northwest . The city thus forms the southern starting point of the Austrian iron road . Today it stretches on both sides of the river to the mountain flanks. In the north these are the foothills of the Hochschwab , in the south the slopes of the Gleinalpe and in the west the foothills of the Eisenerzer Alps .

The area of ​​the municipality is around 108 km², 79% of which is forested. The lowest point in the city is at 515 m above sea level, the highest point is the summit of the Wetterkogel in the Hochalpe (Hochalm) at 1643  m in the extreme south-east of the city area.

Location of the cadastral communities of Leoben

Leoben is divided into six villages or districts (population as of January 1, 2020):

The city consists of ten cadastral communities (KG area: as of December 31, 2017):

Leoben from Kalvarienberg. View from the south

In the populated urban area of ​​Leoben there are seven parks with a total area of ​​around 6.4 hectares. The largest parks, each with an area of ​​around 2.5 hectares, are the Stadtpark (also called Glacis ) and the Augarten (also simply Au or, due to the nearby Asia Spa, also called Asia-Spa-Park ). Other parks are the Gärnerpark with around 4,800 m², the Pestalozzipark with around 4,000 m², the park of the Eggenwald'schen Gartenhaus with around 2,000 m², the Peter-Tunner-Park with around 1,500 m² and the 1,300 m² Jakobipark. There are also numerous unnamed green areas, especially along the Mur, as well as around 20 hectares of urban forest, such as on Maßenberg or Kalvarienberg.

In the entire municipal area of ​​the city, especially in the south, large mountainous forest areas predominate outside the settlement areas in the valleys.

The first mention of the name "Liupina" can be found in a deed of gift from King Ludwig the Child to Count Aribo II , Count zu Göss-Schladnitz, in the year 904. A settlement under the name "Forum Liuben" was first mentioned in 1173 , this was located around the Jakobikirche at the foot of the Maßenburg . From 1261, under King Ottokar II, the city was moved northwards to the current location of the old town in the "Murschleife", with a square floor plan and a fortification wall, the north-western corner fortification of which the former "castle" at the site of today's town hall and the north-eastern corner of the Dominican monastery formed. The town charter was also granted at the same time as the relocation . 1314 is the first mention as iron trading place ("Raueisenverlagsort"). 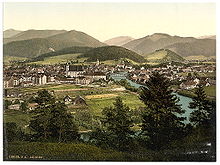 In 1480 the “Waasenvorstadt” in the west was set on fire during the Turkish storm, and the local church “Maria am Waasen” also fell victim to the fire.

In the turmoil of the Reformation and Counter-Reformation , the city served in 1525 as an important base for suppressing the miners' uprising in the Ennstal and around Schladming . Despite this, the city officially joined the Augsburg Confession at the Bruck State Parliament in 1572 , but this only lasted until 1613. In that year the re-Catholicization began; the Jesuit order founded a branch in Leoben. In 1620 he opened a Latin school in the former castle and built the Church of St. Xavier from 1660–1665 . In 1773 the school was closed with the abolition of the order. From 1786 to 1808, after the Admonter Stiftsgymnasium had been relocated to Leoben, there was again a grammar school, but it was housed in the former Dominican monastery.

In 1797 French and Austrian embassies met in Leoben. There Napoleon and the representatives of Austria concluded the preliminary peace of Leoben . In 1805 the city was occupied by the French passing through.

From about 1782 to 1859 the city was the center of the diocese of Leoben and thus the seat of a bishopric. In 1859 it was merged with the Graz-Seckau diocese .

During the 19th century there was a slow but steady development. The following events, among others, testify to this:

In the first half of the 20th century that followed, numerous companies were able to establish themselves in Leoben.

Hacklhaus on the main square, 1895

In 1939, the two previously independent communities of Göss and Donawitz were incorporated, which tripled the city's population.

The city had to survive difficult economic times in the 1960s (closure of the Seegraben coal mine) and the 1980s (restriction of iron and steel production in the Donawitz smelter). Economic reorientation led to overcoming this crisis:

However, the term of office of the mayors Gottfried Heindler and Leopold Posch , who were responsible for the demolition of buildings from the 18th century that were worth preserving, also fell during this period . Most drastic was the destruction of the square complex of the former castle, which housed the Bundesrealgymnasium in three wings and the so-called museum gallery in one wing. Only this one, the north-east wing, was preserved and integrated into today's art gallery, the rest was removed and the concrete block of the new town hall built in its place. The grammar school was relocated to Moserhofgasse in 1962 and renamed "Gymnasium Leoben Alt" when the "Gymnasium Leoben Neu" was built next to it. 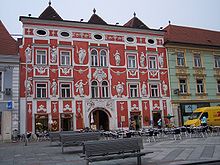 The Hacklhaus on the main square

Old museum building with extensions from 1997

In the census of workplaces by Statistics Austria with the reference date May 15, 2001, 1203 workplaces (including nine with more than 100 and eight with more than 200 employees) with a total of 15,114 employees were counted in Leoben.

The Leoben Justice Center and the District and Regional Court of Leoben are located in Leoben.

The State Police Directorate (LPD) Styria acts as the security authority for the city through its branch office, the Leoben Police Commissioner . Leoben is, besides Schwechat , the only non- statutory town whose security administration is taken care of by the state police department. The Leoben City and District Police Command, which has two police stations and one traffic inspection in the city, is attached to the LPD as the station of the guard for the city and district area . Since the security administration is not provided by the district administration, Leoben has the license plate abbreviation LE, which differs from the rest of the district .

From 1854 until its dissolution in 1999, Leoben was the seat of the Leoben Mining Authority. Their agendas are now being carried out by the South Mining Authority in the Federal Ministry for Sustainability and Tourism , which also has a branch in Leoben.

The local radio station Grün Weiß (company name Radio - TV Grün Weiß BetriebsGmbH Nfg. KG ) is based in Leoben . The online news magazine leobennews.at brings news from the district. It is run by a private person and is based in the nearby municipality of Traboch .

Main building of the Leoben University of Mining and Mining

railroad
Located on the Bruck an der Mur – Leoben railway line , the Leoben Hauptbahnhof station is an important hub for rail traffic . Here the Erzbergbahn branches off to Hieflau , but it no longer runs regularly in passenger traffic.
Leoben main station is the system stop of the Railjet lines Vienna – Villach, the Eurocity and Euronight lines Graz – Zurich and the Intercity line Graz – Bischofshofen – Salzburg / Innsbruck and Graz – Linz. However, from 2026 the long-distance trains Vienna – Villach are to be run via the Koralmbahn and thus no longer come to Leoben.

Street
Leoben is located on the Semmering expressway S 6 and on the Leobener Straße B 116 and is connected to the Eisenstraße B 115 via the few kilometers long B115a .
Local transport
Between 1949 and 1973 the trolleybus Leoben covered the main lines of inner-city traffic; it was replaced by omnibuses .

In the council six factions are represented:

The coat of arms of Leoben has been in use since the Middle Ages and goes back to legends of the "iron-eating ostrich". It was thought that the ostrich was an iron-eating animal. Since Leoben was known for iron and steel at that time, it was included in the coat of arms. The oldest depiction of the city's coat of arms can be found on the seal of a document from 1298.

The municipal coat of arms was re-awarded with an announcement by the Styrian state government on May 24, 2018, with effect from June 10, 2018.

The new blazon (description of the coat of arms) reads:

"In a red shield a silver bouquet , in the beak and in the angled right stand each holding a silver horseshoe ."

The city flag has two stripes in the colors white and red with the coat of arms.

In 1994 Leoben signed a partnership with the Chinese city ​​of Xuzhou . The Chinese archway in Augarten is a gift from the twin city. The cooperation extends to areas such as student exchanges , mutual visits by delegations and a joint appearance at the Expo 2010 in Shanghai . The Ambassador of the People's Republic of China to Austria, Zhao Bin , visited Leoben in 2016. Xuzhou provided many exhibits for the ethnological exhibition “China - Hidden Treasures” (1998) in the Kunsthalle Leoben.

Wikisource: Leobn in the appendix of the Topographia Austriacarum (Matthäus Merian)  - sources and full texts

Municipalities in the Leoben district

Municipalities in the Murtal region