from Wikipedia, the free encyclopedia
This is the spotted version , flagged on August 7, 2020 . There is 1 pending change that has yet to be viewed.

Northwest view of Eisenerz with the Erzberg in the background

Iron ore around 1900 with a view of the Pfaffenstein 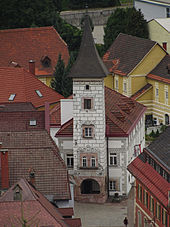 The former name of the community in the judicial district or district of Leoben was Innerberg .

Eisenerz is located on the Erzbach in the midst of the towering cliffs of the Eisenerzer Alps in the southwest and the Hochschwab in the northeast. The four rock formations of Eisenerzer Reichenstein , Wildfeld , Kaiserschild and Pfaffenstein dominate the cityscape. Then there are the reddish colored steps of the Erzberg , which is the largest iron ore open-cast mine in Central Europe.

In the north of the municipality lies the Leopoldsteiner See .

In 1230 the area was mentioned for the first time in a document under the name Aerze , then in 1293 in the inner iron doctor . In 1453 the granting of market rights is documented. The mining rights on the Erzberg belonged to the Eisenerzer and Vordernberg wheel masters from the Middle Ages . Ore mining flourished on the Erzberg until the end of the 16th century . Around 1500 iron ore accounted for 16 percent of the European export volume; around 1550 it was around 20 percent.

In 1529, when the Turks besieged Vienna , the fortifications of the Oswaldi Church were reinforced. From 1519 onwards, Protestantism spread in Styria and developed into a majority religion in Eisenerz by the middle of the 16th century. In the peasant uprising in 1525, which was mixed with misunderstood Lutheran religious demands, the miners, wind house workers and the citizenry from iron ore also took part. Records from the Brucker Winkellandtag in 1572 show that Eisenerz, along with 14 other cities and markets, publicly declared that it was part of the Augsburg Confession. Numerous buildings in Eisenerz bear witness to the heyday of wheel mastership at this time, such as the shift tower and the Schwarzer Hof .

As part of the Counter-Reformation , the Protestant part entrenched the citizens and Radmeister 1599 in the church fortress from Johann Hoffmann , the abbot of Admont , who at the behest of sovereign Ferdinand II. With his accompanying mercenaries, as well as 316 additional players selected shooters and halberdiers forced to give up . Government measures such as confiscations, the compulsion to sell the wheel works to Catholic buyers and the expulsion of those who remained loyal to the Augsburg Confession , the burning of sectarian books or 50 of the population “soldiers put in their quarters” were able to convert the vast majority back to Catholicism . At least 14 cycling champions and their families were on the final expulsion list.

The expulsion and replacement of some of the bike masters who had been mixed up with one another by non-residents and the beginning of the Thirty Years' War plunged the bike masters into financial problems. In 1625, the sovereign took over mining in the Innerberger part of the Erzberg, including processing and trading. The wheel works and mining rights were compulsorily incorporated and the Innerberger main trade union was founded, which administered the Eisenerzer part of the ore mountain until 1881. The mining rights of the Vordernberger Radmeister were used by them until the end of the 19th century. The main trade union in Innerberg also included the hammer mills in Ennstal and the iron dealers of the city of Steyr . In the 17th century, the Innerberger main union developed into the largest iron producing company in the world.

Even women and children were employed in mining. From 1750, attempts were made several times and by various higher authorities, most recently by court decree from Vienna on February 15, 1772, to introduce the spinning trade for women and children in Eisenerz. But all these attempts failed, and a patent issued in 1765 on the introduction of spinning schools did nothing. In 1768, the cycling community rejected an order from the court in Vienna on the grounds that women and children were needed for miner work and that there was a lack of housing due to the introduction of free marriage permits . The new request in 1772 was answered by the cycling community with a reference to this report and the remark that "the realization of the highest request is impractical from every side", and the Upper Chamber of Commerce responded negatively. By court decree of September 4th of the same year, the introduction of spinning in iron ore was finally abandoned.

In 1881 the Oesterreichisch-Alpine Montangesellschaft was founded, which gradually acquired the mining rights for the entire Erzberg and began mining the floors on the Erzberg, which has given the mountain its characteristic shape today. During this time, the cog railway known as the Erzbergbahn was built across the Präbichl to Vordernberg and Leoben .

In 1931/32 the mining operation was practically on the verge of ruin. During the time of National Socialism , iron ore experienced a renewed boom due to the raw materials and armaments industry. With 1.8 million tons, almost a quarter of the production in the German Empire came from the Erzberg. In December 1939 the first 300 Polish forced laborers arrived at the Erzberg, followed by thousands of forced laborers from different countries as well as prisoners of war and concentration camp inmates from Mauthausen.

In 1946, twelve men were sentenced to death by British military courts in the iron ore trials . As Volkssturm people or superiors, you carried out or ordered a massacre of around 250 Hungarian Jews on April 7, 1945 on the Präbichl , who were on a death march towards Mauthausen concentration camp . The trials are among the most important war crimes trials in Austria.

Due to the flourishing mining industry and the numerical size (13,000 inhabitants) of the community, it was granted town charter in 1948. Due to technical innovations in the mining sector itself, but also due to the global crisis in the iron and steel industry in the 1980s, the population shrank to a third over the course of a strong half century.

The forecast by the natives of Erzbachtals owe the discovery of the Erzberg an Aquarius out of the water manhole at the end of the valley of Münichtals . The Aquarius was captured by the villagers with a coat coated with pitch, and for his release he offered them the following:

Gold for ten years,
silver for a hundred years,
or iron for ever!

The clever residents opted for iron.

Eisenerz is the oldest city in Austria, with 40% of the population over 65 years of age.

The municipal coat of arms was awarded with effect from August 1, 1948.
Blazon (coat of arms description):

“In a golden, blue bordered shield, the stylized contours of the Styrian ore mountain with its steps can be seen in its current form in the form of red lines. In the shield on the stone ground stands the figure of a young man in the white costume with the hood of a miner and black shoes, who is holding a red label with both hands crossed by a silver bar and covered with a miner's scraper and a recovery iron next to each other on stakes. " 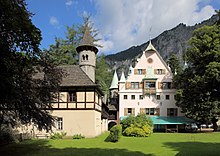 Currently (2015) it is used as the youth sports center of the State of Styria.

Northwest view of the Leopoldsteiner See

In the recent past Eisenerz has tried to distinguish itself as a tourist community. Attractions for this are on the one hand the Erzberg , where a show mine has been set up in the tunnels, and on the other hand the natural conditions of the Eisenerzer Alps and the Hochschwab , which are intended to attract hikers and mountaineers.

Eisenerz is the historical center of the Austrian Iron Road . The places on the old Eisenstrasse, which are located in the Austrian federal states of Styria, Upper Austria and Lower Austria, have joined together to form regional Eisenstrasse associations, whose task it is to make the area known as a cultural and tourist region worth visiting.

Via ferratas : Between 2005 and 2007, four new, challenging via ferratas were built in the mountains around Eisenerz, which place high demands on mountaineering skills.

In addition, in the high valley of the Eisenerzer Ramsau , which is characterized by abundance of snow and cold, there is a Nordic skiing center with four ski jumps ( Erzbergschanzen ), a natural toboggan run and a biathlon facility.

Eisenerz has accommodation establishments and private room rental companies, but to this day no hotel.

The structural change towards the tourist community is taking place only slowly, so in some cases larger projects have been planned for years and then rejected due to lack of demand. B. the “Rogner Project”, a medium-sized ski area in the Eisenerzer Ramsau, or the “Seehotel” on the Leopoldsteiner See. 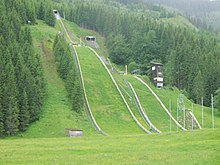 The municipal council has 21 members.

Municipalities in the Leoben district