from Wikipedia, the free encyclopedia
This is the spotted version , flagged on August 7, 2020 . There is 1 pending change that has yet to be viewed.

The Erzberg with the town of Eisenerz in the foreground

Iron industry on the Erzberg 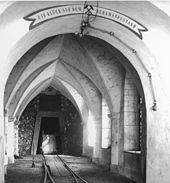 The plants for processing the ore

The Erzberg is a mountain in the Styrian town of Eisenerz in the mountain range of the Eisenerzer Alps . Iron ore, mainly siderite, has been mined on the ore mountain at least since the 11th century . It is the largest open-cast iron ore mine in Central Europe and the largest siderite deposit in the world. The mountain, also known as the “Steirischer Brotlaib”, still represents the most important economic basis in an otherwise structurally weak region. Important Austrian institutions such as the Voestalpine with its steelworks in Linz and Leoben-Donawitz or the Montan University Leoben owe their existence to the Erzberg . It was also the basis of the economic boom in the Eisenwurzen region and eastern Upper Styria from the 16th to the 20th century.

The mining in the Styrian Erzberg is operated by VA Erzberg GmbH.

The Erzberg belongs to the Grauwackenzone . It is considered to be the largest siderite deposit (FeCO 3 ) in the world. In addition to siderite, the mined material consists of anchorite and iron-rich dolomite (raw wall). Due to this mixing with less iron-rich minerals , the iron content is only between 22 and 40%, on average around 33.5%.

With a total of 250 employees, around 12 million tons of rock are extracted annually in the multi-storey opencast mining and processed into 3 million tons of fine ore, which is transported by rail to Linz and Leoben-Donawitz. According to current estimates, experts reckon that the ore reserves will be sufficient for another forty to fifty years of mining.

According to legend, the discovery of the iron deposits on the Erzberg can be traced back to the knowledge of an Aquarius . This lived in a grotto northwest of Eisenerz and was caught by the residents near the Leopoldsteiner See with the help of a pitch-soaked coat. In order to buy his freedom again, he offered "gold for ten years, silver for a hundred years, or iron for ever". The clever Eisenerzer should have chosen the latter, whereupon Aquarius showed them the Erzberg. After they were convinced of the ore deposits, they released Aquarius and it disappeared into a karst spring, which has been called Wassermannsloch ever since .

The ore mine in the city of Eisenerz has been attributed the legendary founding date 712 for around 400 years. Today's assessment ranges from “pure scholarly invention” to the assumption of a mining operation in the Slav period. Historical field names and finds of remains of historical smelters with iron slag in the area of ​​the Eisenerzer Alps suggest that the Karantans also operated ore mining and smelting furnaces here. In the Eisenerzer Oswaldikirche, consecrated in 1512, there is said to have been an inscription that documented the foundation of ore mining in 712. The strangely precise date could be explained by a mix-up with the year of the church inauguration, since the late Gothic numbers 5 and 7 looked very similar and at that time the thousands were mostly left out. The Innerberg main trade union accommodated so that they could hold ceremonial millennium celebrations in 1712. To what extent the historical sources available at that time were misunderstood or deliberately expanded can no longer be clearly clarified today. From 1625 onwards, the Innerberger main trade union mentioned, among other things, also mined ore in the Eisenerzer district.

The Erzberg was first mentioned in a document in 1171.

In the 14th century, by order of the sovereign, the mining of iron ore on the Styrian Erzberg, the production of the pig iron and the further processing were clearly arranged. The upper half of the mountain was developed from the Vordernberg to the south , while the lower part was exploited by Innerberg, today's iron ore. A horizontal line at 1186 m above sea level, the so-called Ebenhöhe, divided the mountain. An iron regulation, issued in 1448, also led to a division of the sales areas. Northern Europe was supplied from Innerberg, while south-eastern Europe, via Venice to the Levant , received iron from Vordernberg. The iron trade was concentrated in Steyr and Leoben , which were able to establish themselves as privileged centers in this regard. As early as 1287, Steyr received the great privilege from the sovereign for trading in Innerberger iron and in 1314 Leoben for trading in Vordernberger iron.

Up until the introduction of powder blasting in 1720, ore was extracted in tunnels that were driven in the mountain with mallets and iron . First the explosions were made with black powder and, after the invention of dynamite, with this much stronger new explosive. Today modern emulsion explosives are used, which are only made sharp after pumping in. In the 19th century, thanks to the initiatives of Archduke Johann, iron mining experienced a great boom, from which the whole region benefited. The surface mining was the Viennese Professor Franz Xaver Riepl stimulated. In 1986 the underground mining was stopped, two years later a show mine was set up in a tunnel.

In some of the old tunnels, the Montanuniversität Leoben built a center for tunnel safety and tunnel research under the name Zentrum am Berg . Research work by the university and companies on the subject of tunnel safety as well as the testing of new materials and processes is made possible there, the tunnel research center was opened in May 2020, and new tunnel tubes were blasted into the Erzberg in addition to the existing ones.

The Erzberg is 1466 m high and has a total of 24 terrace-like floors. The dismantling is currently only taking place up to the 21st floor. 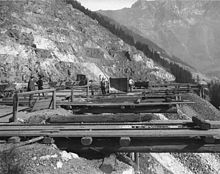 The distinctive pyramid shape of the Erzberg emerged from 1890, when step-shaped open-cast mining was introduced. In 1907 there were 60 steps with a height of 12 meters, in 1928 the number was halved to 30 steps - which are named after saints or deserving miners. With a height of 24 meters per step, they give the Erzberg its current appearance.

Use for sporting events

After two automobile hill climbs were held on the Erzberg in 1988 and 1989 , known as “Europe's Pikes Peak Race ”, one of the toughest enduro races in the world, the Erzberg Rodeo , has been held here once a year since 1995 . The world's elite, but also many private drivers, regularly gather here to conquer the mountain on motorbikes. Karl Katoch is considered to be the originator and organizer of this international event. 1500 drivers from over 30 nations start the prologue on Friday or Saturday. The 4-day event culminates on Sundays with the 4-hour Red Bull Hare Scramble , in which, as a rule, fewer than 50 drivers of the 500 starters left after the preliminary round reach the finish. Many of the private drivers fail on the first steep slope.

Since 2003 there has been an annual mountain run on the Erzberg. Measured by the number of participants, the Erzberglauf, with over 1000 participants per year, is one of the largest mountain running events in Austria. On a route length of 12.5 km, 745 meters of altitude are overcome. On the day before this competition, there will be an obstacle run under the name Rock @ Man Dirtrun Erzberg , followed by a mountain bike race.

Here is the Zentrum am Berg , an experimental tunnel system from the Montan University Leoben . It is used for mining research as well as a training center for tunnel operators and civil protection services.