The title of this article is ambiguous. Further meanings are listed under Aalborg (disambiguation) .

Listen to Aalborg or Ålborg ? / i ( [ˈʌlb̥ɒːˀ] , German obsolete Aalburg ) is a Danish city with a seaport and the administrative center of the Nordjylland region .

After Copenhagen , Aarhus and Odense , Aalborg is the largest city in the country.

Aalborg is located on the Limfjord , which narrows like a river over a distance of about 35 kilometers and connects it to the Baltic Sea. A railway bridge from 1879 and the Limfjordsbroen for car traffic cross the Limfjord ; both were designed as bascule bridges to enable larger ships to pass through. The motorway runs through the Limfjord tunnel .

According to excavations, the first settlements in today's urban area are over 1000 years old. At that time ritual burials took place at Lindholm Høje , a hill north of the city .

The first mention of Aalborg dates back to 1040: the name Alabu was struck on a coin . Around 1075 Adam von Bremen mentioned Aalborg, which was already an important trading center, as an important port for ships sailing to Norway.

In 1342 Aalborg received city ​​rights from the king , after which the city grew rapidly. Another growth spurt began when it was granted the monopoly on trading in salted herring in 1516 . In the so-called count feud on December 18, 1534, the Danes and Holsteiners stormed under Johann Rantzau , the general of Christian III. , Aalborg occupied by farmers, with 2,000 farmers and their families being killed. In 1554 the city became the seat of the Lutheran diocese of Aalborg with St. Budolfi Cathedral as the main church . When Wallenstein devastated Jutland in the Thirty Years' War in 1627, Aalborg was sacked and on September 27th of the same year the corps of Margrave Georg Friedrich von Baden was captured by the Imperial General Schlik . The city was also ravaged by the Swedes later, in 1644 and 1657. On July 10, 1864, Prussian troops crossed the Limfjord at Aalborg, which they had occupied, and then occupied the northeastern part from Jutland to Skagen.

In the course of the Danish spelling reform of 1948 , the digraph Aa was generally replaced by the letter Å ; thus the formally correct spelling changed from Aalborg to Ålborg . However, this spelling was not able to establish itself among the city authorities and the population (cf. Aabenraa ). Since 1984 you can officially write the name Aalborg again. However, Ålborg remains the recommended choice of the Danish Language Commission ( Dansk Sprognævn ). The double-A has meanwhile become a symbol of identification for the people of Aalborg, to which the Aalborg-based rapper Niarn dedicated the title Dobbelt-A .

1988 Aalborg was awarded the European Prize awarded for their outstanding efforts to European integration thoughts. 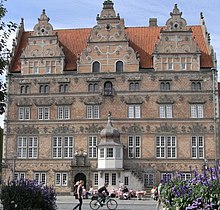 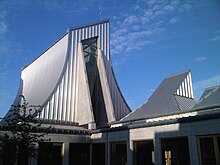 In the port city, industrialization began relatively early, which can still be observed today in the strong chemical , metal , tobacco and textile industries as well as the shipbuilding industry located there . The Aalborg Akvavit , also called Aalborger, was made in the city until April 2015, and has been made in Norway since then. 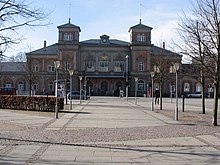 Aalborg is part of the intercity network of the Danish State Railways and has hourly connections to Copenhagen and Frederikshavn .

Aalborg is located directly on the E45 , which crosses Jutland from the German border to Frederikshavn .

In Aalborg, as in Arhus and Odense , the construction of a new tram system was planned in the 2010s. The network should include 24 stations and a length of 12 kilometers. Completion was expected in 2021. While Aarhus and Odense were able to realize their plans, the project in Aalborg was put on hold in 2015 as the Danish government had to cancel the grants.

There is a dense city bus network. As part of the CIVITAS program of the European Union , stops have been equipped with modern displays and the range of information on the Internet has been massively expanded. As a replacement for the tram project, which was canceled in 2015, Aalborg is planning the + BUS project : extra-long buses that run on their own routes at short intervals should connect the city center with the growing districts in the east and west of the city. The planned route includes the University of Aalborg, the Gigantium multifunctional arena and the Aalborg University Hospital .

The Aalborg Airport of u. a. SAS Scandinavian Airlines , Norwegian and KLM served .

The city of Aalborg organizes every four years youth games (Danish: Ungdomslegere ), a sports festival to which young people from all partner cities are invited. Similar games take place in the intervening years - also every four years - in the twin cities of Rendsburg, Lancaster and Almere.

Wikisource: Aalborg  - Article of the 4th edition of Meyers Konversations-Lexikon