In the case of a folk election , the electoral area is divided into 10 great districts (uniform color) and 92 electoral districts. The three parts of the country can be recognized by the colors blue, red and green / yellow.

The geographic unit Landsdel ( Dan. , Pl. Landsdele , dt. Landes part ) takes place in Denmark in different areas of application. The 5 regions of Denmark are grouped together as electoral areas in 3 parts of the country, but for statistical purposes they are divided into 11 parts of the country according to the NUTS 3 level of Eurostat . 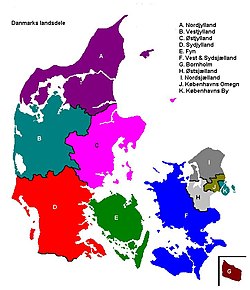 The eleven regions of the official statistics

Eleven Landsdele have served as territorial units for official statistics since the 2007 local government reform . In the common classification of the European Union, they correspond to the NUTS level NUTS 3.

In contrast, LAU 2 ( Sogne ) and NUTS 3 (parts of the country) represent statistical units. A part of the country combines several municipalities within a region. This is the basis for the calculation of state subsidies for municipal expenditure in the context of unemployment insurance ( beskæftigelsestilskud ) , for example .

The following table gives an overview of the allocation of municipalities, parts of the country and regions:

In everyday parlance, Landsdele are the not always sharply delimited parts of the country with their own regional identity and history.