Fanö is a redirect to this article. For the German radio receiver, see Fanö (device) .

View from the 17 meter high Kikkebjerg over Nordfanø to Esbjerg

Beach on the west coast 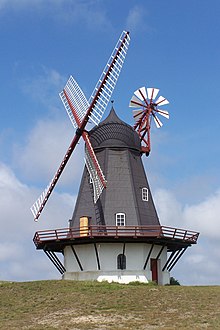 Fanø is the second northernmost of the Danish Wadden Sea Islands and is about 50 kilometers north of Sylt . The next larger city is the industrial and port city of Esbjerg , which belongs to Jutland . A ferry connects Fanø with Esbjerg. The journey time is around twelve minutes.

The two largest towns on the island are Nordby with 2795 and Sønderho with 295 inhabitants (January 1, 2020). There are also the places Fanø Bad and Rindby . The economy is largely shaped by tourism .

Fanø was created as a sandbank in the shallow sea area between Horns Rev (reef) and the German island of Sylt. The subsoil of the island consists mainly of drifting sand formations that have formed both high dunes and flat areas. The wide dunes and the wide sandy beach , which stretches along the entire west coast of Fanø, are the defining forms of the landscape. Even today, large amounts of sand are washed up by the sea on the west beach, so that the island slowly enlarges to the west. In the east of the island (from Grøningen in the north to Hønen bei Sønderho in the south) there is a narrow strip of marshland and salt meadows that are extensively grazed and from which reeds are extracted.

In the middle of the island you can find heathland , a planted pine forest and a so-called clit plantation , in German for example: dune plantation. In autumn and winter in particular, a comparatively large amount of amber washes up on the island's west beach after storms. Pearls, animal figures and amulets made of amber have also been found here, which date back to the Mesolithic Maglemose or Ertebølle culture .

The island has a very eventful history. Initially, Fanø was a sandbank in the North Sea that was uninhabited for a long time. In the land register of King Waldemar II , the island can be traced back to 1231. In modern times , the residents had to struggle with drifting sand . This is one of the reasons for creating the ditch plantation . In 1741 the residents of the island bought themselves free from the Danish crown at an auction in Ribe . The island, including the hunting and beach rights, fell to the residents for 6,000 Reichstaler. Since the 18th century there has been a "royal privileged" Kro (German: Dorfkrug ) in each of the towns of Nordby and Sønderho .

In the 19th century, the island experienced a rapid development of shipping. In 1870 the island had the second largest merchant fleet in Denmark; only the Copenhagen fleet was more important. From this time you can still find numerous well-tended fishermen's houses and captain's villas in Nordby and Sønderho. This era ended with the increasing siltation of the port of Sønderho and the construction of the steamship port in Esbjerg.

In August 1934 the Ecumenical Youth Conference of the World Federation for Church Friendship took place on Fanø . Dietrich Bonhoeffer gave two speeches there under the title The Churches and Peace , in which he called for peace among peoples out of Christian responsibility.

During the German occupation of Denmark in World War II , Fanø was part of the " Atlantic Wall ". Numerous bunkers and other military fortifications of the German Wehrmacht on the island date from this time . After the war, some of them were blown up in vain, but some of them continued to be used by the Danish army for a long time . An interest group is currently in the process of reopening some bunkers to the public. North of Nordby at the end of the Vesternasen trail there is a whole cluster of accessible bunkers. The bunkers on the south side of the island are also a popular destination for tourists.

Fanø was with its two parishes Nordby Sogn and Sønderho Sogn part of the Harde Skast Herred in what was then Ribe Amt . Since 1970 the island has been an independent municipality in the slightly redesigned Ribe Office . In a vote in 2005, the inhabitants of the island, however, that Fano under the modification in 2007 decided to Danish municipal reform a part of the new Esbjerg Kommune (along with the former municipalities Ribe and Bramming ) in the new South Denmark was where the up then existing Ribe Office rose. Overall, around two thirds of those eligible to vote voted against the merger. Fanø thus forms the second smallest municipality in Denmark after Læsø (these two and the other two “island municipalities ” Ærø and Samsø are the only Danish municipalities with fewer than 10,000 inhabitants).

Among the mammals, the wild rabbit is particularly striking. The species was brought to the island in 1913 and has increased significantly since then. The animals cause considerable damage in fields and forests. Roe deer have been on the island since 1950. The first animals came from the Valdemars Slot manor on Tåsinge . While fox, ermine and hare are native to Fanø, there are no squirrels, rats and moles.

The bird life on the island is particularly pronounced at the time of bird migration. Flocks of ducks, geese, waders and songbirds move along the coastline to their arctic and sub-arctic breeding areas in spring and back to the wintering areas on the North Sea coast, in the Mediterranean or on the African continent in autumn. Numerous migratory birds rest on the island or stay there in mild winters (in particular waders such as sanderling , turnstone , oystercatcher but also passerine birds such as mountain finches and snow bunting ). In 2015, the Sønderhosø (German "Sønderhosee"), which is fed by rainwater, was created in the dunes about three kilometers north of the beach entrance at Sønderho, close to the beach. There is a bird watching station on the southern shore of the lake, which can be reached from the west beach.

The enormous flocks of ducks passing through had caused the island's inhabitants between 1866 and 1888 to create a total of four bird beds on the wadden side of the island . The bird beds were operated in partnerships. The shares could only be inherited and not sold. The construction cost around 9,000 Danish kroner at the time, and the annual maintenance was 1,000 kroner. Up to 5,000 ducks were caught annually in each of these bird beds. In 1887 a mallard paid 90 Øre, a pintail duck 75 Øre, a wigeon 60 Øre and a teal 35 Øre. The duck business was a good source of income for the islanders. This type of bird trapping has been banned in Denmark since 1931. After the hunting ban, the owners lost interest and the bird beds became increasingly neglected. At the beginning of the 1960s there was a renewed interest on Fanø in reviving three bird beds. The local hunting clubs put the Albue Vogelkoje and the Sønderho Vogelkoje back into operation, but they were now used for breeding and releasing mallards. Sønderho Gamle Fuglekøje was given a special function . After being rebuilt, it was used from 1960 to 1990 as a ringing station by the Wildlife Biology Institute on Kalø (Danish: Miljøundersøgelser på Kalø) and has been open to visitors since 2003 after extensive renovation with an information pavilion and observation tower. The Terredal Fuglekøje and the Albue Fuglekøje in the Albue Bugt (German: Elbow Bay) can be reached by private vehicles and can be visited.

The island is heavily influenced by tourism . The first hotel was built in Fanø Vesterhavsbad at the beginning of the 20th century . The important Fanø Golf Links , the oldest in Denmark , also date from this period . In the area of ​​the two places Fanø Vesterhavsbad and Rindby there is the large holiday home area Rindby Strand and several campsites . In 2008 there were more than 2,700 holiday homes on the island.

The Fanniker , the residents of Nordby, present their traditional costumes, dances and old songs on the Fannikerdagen every summer .

Numerous museums document life on the island. Fanø Art Museum in Sønderho, founded in 1992, has an important collection of works by Danish west coast painters. Artifacts from local culture are on display in the nautical and costume collection and the Fanø Museum in Nordby. Hannes Hus in Sønderho exemplifies the everyday life of a resident of Fanø around 1900.

The private café Nanas Stue in Sønderho houses the Fanø tile collection (hence also called the tile museum). Here you can see ornate tiles, some of which are well over a hundred years old, which seafarers brought home with them on their empty trips from the Netherlands as goods that are increasingly in demand.

There are two churches on the island. In Sønderho Kirke there are 15 models of ships that are hung in the nave under the roof. With a capacity of 800 people, it is one of the largest shipping churches in Denmark. The church in Nordby also has a number of ship models that are well worth seeing. Architecturally, the two island churches are impressive due to the lack of a church tower.

Every year around 17./18. June the largest international kiteflyer meeting in the world takes place. The kite festival officially takes place from Thursday to Sunday between Rindby and Fanø Bad. The traditional welcome meeting is held on Thursday evening in the Rindby riding arena; There is an auction for kites on Saturdays. The proceeds will go to an aid organization for children in need in Colombia . In 2009 the meeting took place for the 25th time. Traditionally, only the Fanø Classics , a meeting on the subject of "Historical Dragons" and the auction are organized. There is no official kite festival with invited guests. Nevertheless, up to 4,000 hang-gliders and thousands of visitors from all over the world come to Fanø every June.

Sons and daughters of Fanø

Personalities who have worked in Fanø

Fano and Esbjerg served as a motive for the island sands and the coastal city Morlunde in 2003 published novel Midnight Hawks by Ken Follett .

Municipalities in the region of Syddanmark